What is the correct name for this chord?

Here are some attempts at naming this chord from four separate conversion web apps:

I find it interesting how they each approach it differently, and wanted to see if someone else here has insight into which way is most 'correct' with no context for the chord.

There is one caveat, and that is I'm not interested in finding a better way of naming it by rearranging the note order, that's not the point of this question. The main point is I want to know how to handle adding an extension to a chord structure without removing the adjacent note to the extension. In this example it's the 9 and b9.

chords chord-theory chord-voicings
share | improve this question | |
asked May 24 at 8:41

Not every simultaneity of notes need be named as a chord. There are 924 possible 6-note selections from 12 notes. For this reason, I prefer to read traditional music notation rather than try to decode chord symbols (or for my own lead sheets, just write the melody, simple chords, major, minor, seventh, nineth, diminished, and the like; if something is more complex, I'd not use a lead sheet even in my shorthand stuff.)

However, this looks a bit like a polychord. There is a B06 (D-F-B) superimposed on a C9 with the fifth and seventh dropped (C-E-Db). However, combining incomplete chords may not describe what's happening harmonically.

Without seeing the context, it's hard to know what's happening musically. Note clusters (in equal temperament) can have more than one name. Take Ab-C-Eb-Gb: this is an Ab7-5, and Ab seventh with a flat fifth. It's rather common in classical music and moves nicely to Db-F-Ab (perhaps inverted), just a variant of a V-I. However if written as Ab-C-Eb-F#, it would normally resolve to G-C-Eb-G (or G-C-E-G) and then to G-B-D-G (or F) as a German Sixth. Sometimes (for various reasons or readability or carelessness) one will be written when the other is meant. It doesn't really matter too much. Chord usage, not chord names are what's important. That's why the key and context are needed to decode the music.

It's very easy to throw together a set of notes that, particularly out of musical context - have no 'correct' chord name. And it's easy to take a less random set and label it in several 'correct' ways.

Here's what the notation program Sibelius makes of your note set. It actually gives up without much of a fight, suggesting just two names. Neither of which, rather surprisingly, consider it as a C-rooted chord. I'd be more impressed had it had the confidence to report 'no useful name'. 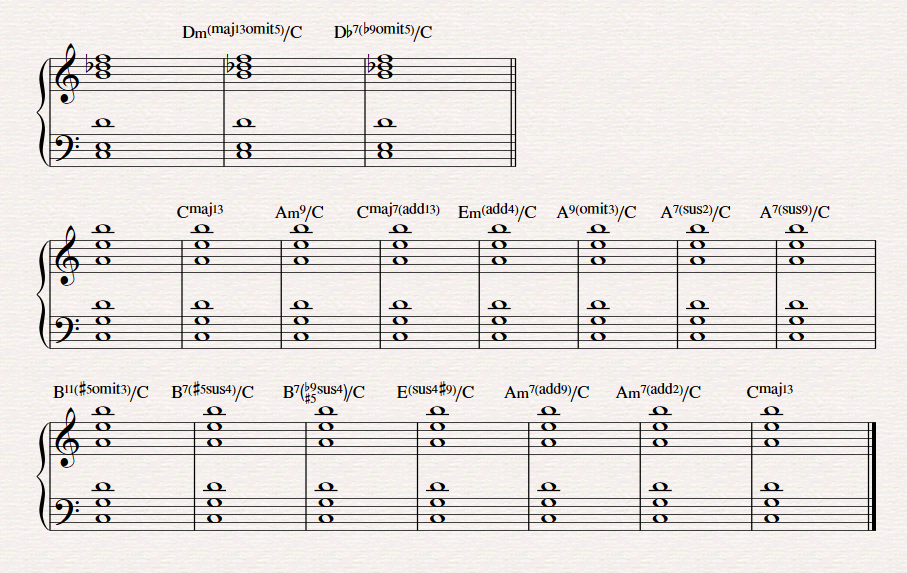 More interesting is what Sibelius makes of a rather more likely C-based quartal voicing. 13 possibilities, before looping back to its first shot.

I suggest you allow 'no useful name' as a result from your algorithm.

Not the answer you're looking for? Browse other questions tagged chords chord-theory chord-voicings or ask your own question.