Middle C will be added to either the treble or bass staves as ledger lines. The reason it isn't centered in the middle, is because it will be associated with the bass or treble.

Maybe you can get it to be centered, but you will be running contrary to how middle C is read by the player as a ledger line added to one or the other staves. 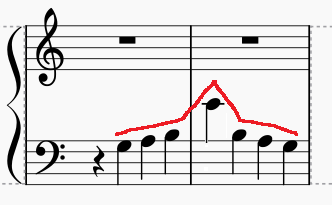 ...if a ledger line was centered between the two staves, it looks like there is a large leap in a line of step-wise motion.

...putting the ledger line one space above the bass makes it visually clear the line is smooth steps. 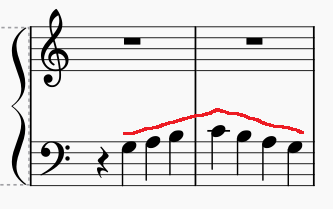 As already mentioned, this is generally not a good idea.

Nevertheless, what I think you want can be achieved by adjusting the padding between the staves in a grand staff.

NB: The staff-staff padding number will depend on the notes in your score

8
Is there a way, in Lilypond, to eliminate the instrument name from a staff from outside of the staff context?
7
How to have one voice in multiple staves with lilypond?
5
lilypond: can I combine \autochange and \change Staff?
6
Cross-staff chord in score with multiple voices in Lilypond
1
Explicit C major key signature in lilypond
3
Reducing staff numbers in LilyPond
4
Is there a way in Lilypond to omit entire staffs from the pdf layout but listen to them in MIDI?
6
Lilypond - autochange with alternative staves / turning point
2
How to turn off lilypond automatic staff width
2
Aligning cross-staff stems when the same pitch is involved with Lilypond