I am trying to transcribe a chord progression that appears here (timestamp 0:44).

I'm having trouble naming some of the chords below. I think the last two are correct, and function as the ii-V of B major. (It is actually a deceptive cadence because it leads to a G#m chord, which starts a G#m C#7 F# D# chord progression which is the common ii-V-I-vi in F# major.)

I'm having trouble understanding the first two chords. I've named them using slash notation, but I would like to rename them without using slashes. I could call them A#m11 and Am11 respectively but that still does not really help me understand their harmonic function. The chromatic descending bass line is very interesting to me, but since the chords seem to just move completely in parallel, it doesn't seem to be a secondary dominant (or something) disguised with inversions. 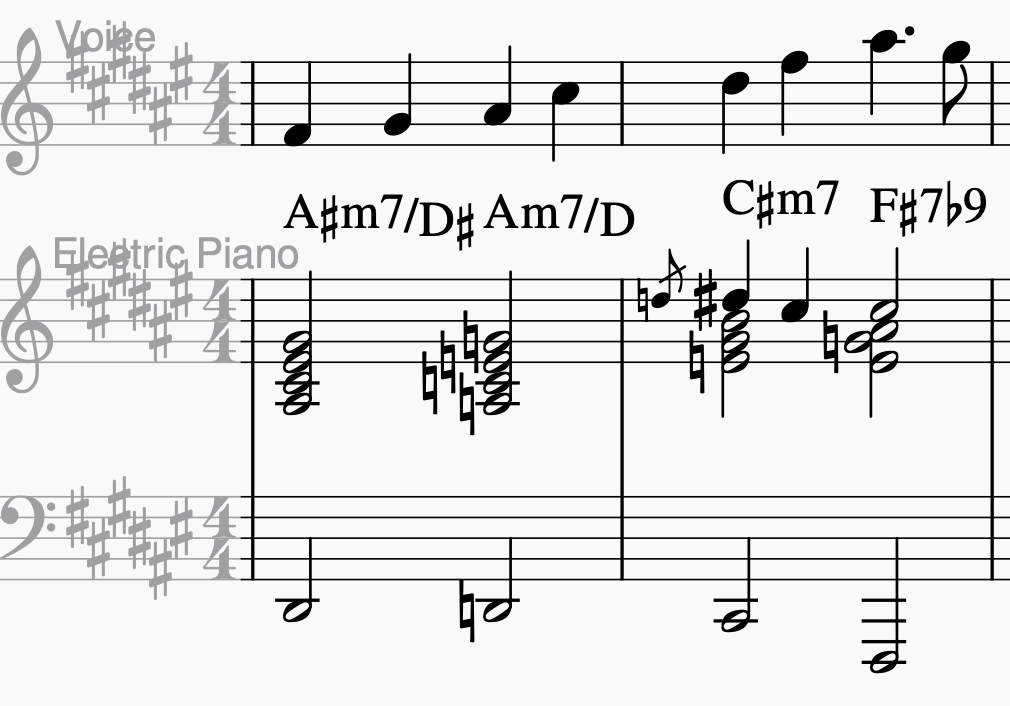 chords harmony chromatic
Share
Improve this question
asked May 31, 2020 at 4:06

You’re very close on those two chords, but they are actually D#m11 and Dm11, you just missed including the F# In the D# chord and F in the D chord a m10th above the roots. There is no need for inversions. It also gives you a logical analysis coming from the V chord before them to a deceptive cadence to vi, then bvi, then another deceptive cadence, ii-V to IV but instead going to the ii which you already figured out.

One interesting thing, there is quite a rub on the Dm11 chord with the A# and C# melody notes but because it’s a chromatic passing chord for only. 2 beats it sort of functions like a dominant even though it’s a minor chord.

You might already know this but I want to point out that the basic body of the tune is actually a longer progression than what you wrote, G#m C#7 F# D#. It is actually:

It might be my personal preference but I prefer to think of tunes in this key and style as Gb instead of F#.

Not the answer you're looking for? Browse other questions tagged chords harmony chromatic or ask your own question.

21
"slash" chords, e.g. B/F♯ - are these only for inversions, or can any note be the bass note?
2
How are 13th chords with alterations "shorthand" written?
3
Parallel chord substitutions
3
Chromatic Mediant modulation: Can I use an omnibus progression for this?
1
Writing down chord names and understanding their function in an example
2
Why harmonize major scale with sus chords?
0
Roman numeral analysis of chord with non-chord tone in bass
2
Naming/understanding this dominant chord with quartal upper structure
1
How to interpret this blues-like chord sequence?
1
Alternative to to C# minor to G# minor progression on ukulele?