Is there a difference between playing off the beat and syncopation?

I will be doing my music exam soon for school and I am very confused with this example question they gave me which was "What is the difference between playing off the beat and syncopation?". Could someone please explain this? Thank you.

theory terminology syncopation
Share
Improve this question
asked May 31 '20 at 5:04

Both terms refer to playing accented notes in places other than the strong down beats, e.g. other than beat 1 and 3 in case of 4/4 tempo.

I'd say syncopation is the term super ordinate for the beat between accented beats and the and off-beat: 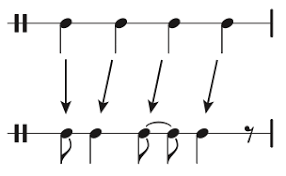 while off-beat can just be the notes between the the beats (e.g. "off-beat" clapping) or the rhythmically characteristic notes that are played in advance.

Denis Arnold (1979, p. 93) says: "the syncopations of this passage are of a kind which is almost a Gabrieli fingerprint, and they are typical of a general liveliness of rhythm common to Venetian music".[10] The composer Igor Stravinsky (1959, p. 91), no stranger to syncopation himself, spoke of "those marvellous rhythmic inventions" that feature in Gabrieli's music.[11]

off-beat: The beats not normally accented in a measure. The congregation clapped along on the offbeat. Wiki

So in syncopated music the stress is on the longer note between the beats, while off-beat can be played as the rhythmical accompaniment straight between the beats - and more and less accentuated - or really as a suspended or deferred accent.

Off the beat, means you don't play with the beat but slightly after it for effect.

I maintain that syncopation and off-beat are really distinct things, though they may sometimes come out indistinguishable.

Classical musicians tend to call everything that emphasizes weak beats syncopation, but that's easily explained with the fact that there are no backbeat grooves in classical music.

Not the answer you're looking for? Browse other questions tagged theory terminology syncopation or ask your own question.

1
Is there a constant relation between a song notes and its chords progression?
3
Why do composers use fermatas?
1
confused about modes and the proper way to use them in my playing
11
What is the difference between grouping overlaps and elisions?
1
Songs with off-beats?
0
How to identify syncopation?
0
Syncopation rhythm and alternating between on and off?
3
Difference between these three sextuplets notation
12
Can we really detect the difference between a couple of BPMs?
4
Stressing the third beat more than the first in 4/4: is it syncopation?