How to deal with hurting fingers (piano)?

I am currently 19 and began playing the piano when I was six - so I have been playing the piano for quite a long time. Last year I began an apprenticeship as an software engineer - so I spend a lot of time typing on an computer keyboard. I play Ragtime pieces (Entertainer, Original Rags, learning Easy Winners and Peacherine Rag) most of the time and try to learn Boogie Woogie, but before that I mostly learned classical pieces.

When I visited my parents for some weeks, I played around 2 - 3 hours (or more, I'm not sure) a day on their piano, which has a very "heavy" keyboard - so I probably overused my fingers and since then (it's about three weeks ago), the finger joints begin to hurt when I play for a longer time. This even occurs when I play on my stage piano, which has a by far lighter keyboard than my parents upright piano.

A slight pain usually occurs during the play, but it softens after I stop but returns the next day (usually I wake up with mild pain in the joints). I consulted a MD, but so far, they didn't found a cause other than overuse (e.g. rheumatism excluded).

How to deal with this situation? Should I stop playing for a while (how long)? Consult a piano teacher to correct mistakes in "finger posture"? Train my fingers with certain exercises? Do something other than that?

To clarify which joints are hurting, it are these (sorry for bad picture formatting): 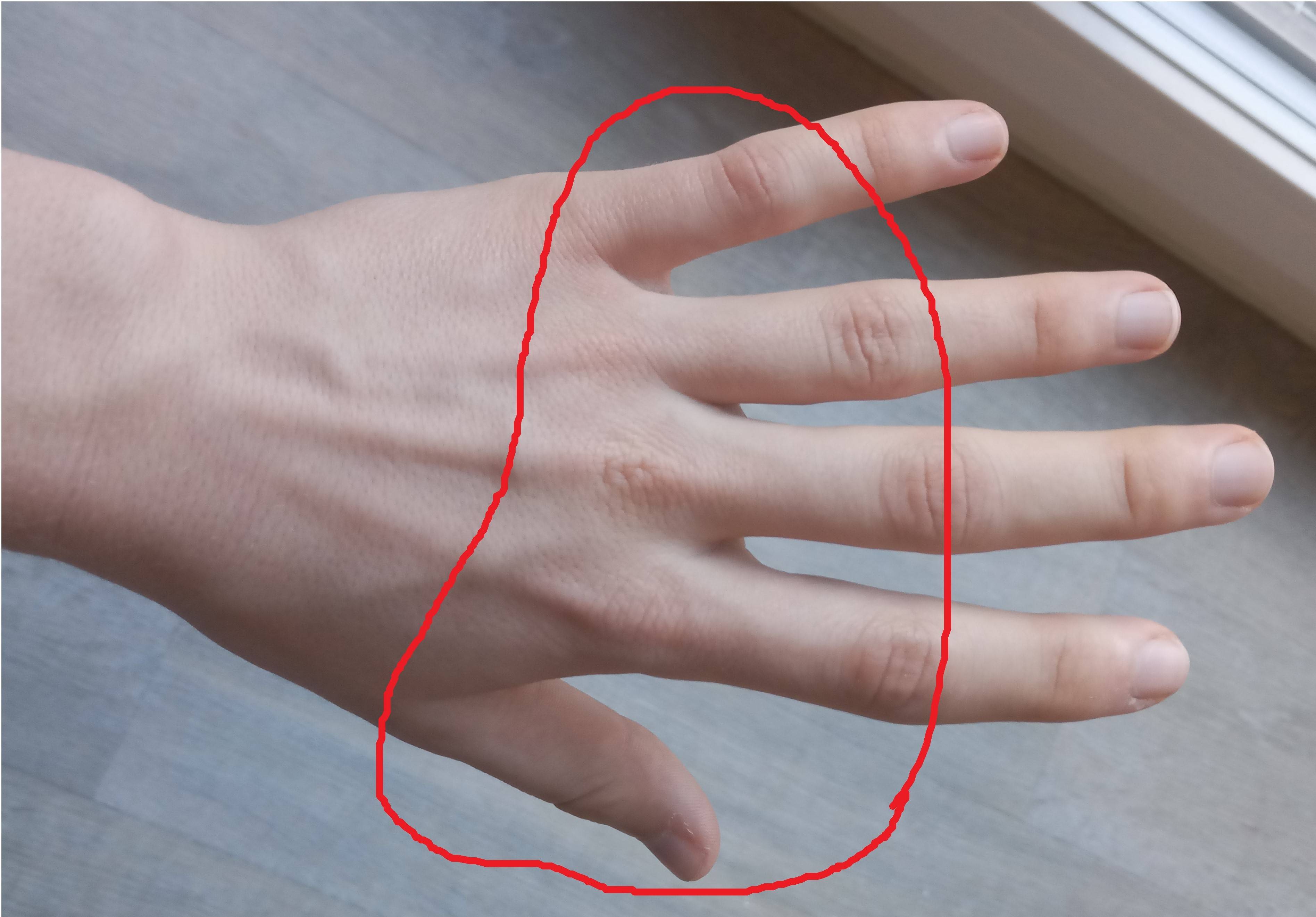 I was in your shoes, or still am actually.

In my late teens my hands started to hurt, in the areas you show in your picture, while using the computer keyboard and while playing wind instruments. It got to the point where I would close my hands and type with my thumbs clenched under my fists, and it sort of made me quit playing wind instruments. It's probably the main reason I picked up the harmonica, which today is my main instrument. Ever since then (I'm 30 now) the pain has returned once every couple of years, and the only thing that seems to help is to reduce typing to a minimum and rest my hands for several weeks.

My most recent troubles started nearly two months ago, and I'm still recovering. When it's at its worst I can feel a slight aching in my hands even in the nights and the real pain starts after writing a paragraph or so, but now I can spend a few hours a day at the computer. I'm currently in the last year of a PhD position, so the timing for keeping off the keyboard is bad to say the least. Luckily, the Swedish system is generous enough to have allowed me some paid sick leave, but I know many countries are more hostile towards people with injuries.

Since you've been playing the piano for so long, and only relatively recently changed your typing habits, my money is on the computer being the culprit here. You talk of consulting a piano teacher, why not consult someone on your typing posture?

If I'm right (I'm no medical professional after all) you should be careful about pushing your hands at this point. The internet is full of horror stories of people doing precisely that and suffering from it for years or even decades; a quick search found the following scary-but-hopeful blog post https://medium.com/@mrmrs_/i-got-rsi-and-what-happened-next-wasnt-surprising-at-all-63ddb58b5e3f

The upside is that (if I'm right) there's a lot you can do to improve the situation! There's tons to read on typing ergonomics, but the main points are to use a reasonable keyboard, take breaks, exercise and learn about which movements strain your hands. These helped me a lot, and I suspect the recurrences of my pain are due to lapses in adhering to them.

Some things you could try right away, along with taking frequent breaks. If you aren't doing them already, try these:

Try different postures and notice how they feel different in terms of strain.

As computer keyboards will likely play a role in your life whatever path you end up on, it never hurts to try to establish good habits early on. Read about what has worked for others and see what works for you. All this said, depending on how many hours a day you spend at the piano some research on piano ergonomics could be a good idea as well.

I would guess that you are probably pressing into the keybed. Once you produce a sound by playing the key, there is no reason to press and by pressing, all the energy you are putting into the piano is backfiring into your joints, tendons and ligaments. Playing to the point of sound, that little bump you feel when you slowly depress a key without making a sound, should be sufficient. There is no point going beyond that into the keybed.

The second thing you might be doing wrong is playing from the flexors. It is not your fingers that play the piano, it is your arm. If you play from your flexors, the muscles in your forearm which flex your fingers, as most pianists do, your fingers will be sluggish and uneven because the flexors are strong but not fast. They are also interconnected so if you try to isolate one finger you pull on the others which will create uneven playing and tension since a bone can only move in one direction at a time. If you have several muscles pulling on one bone, there will be tension as they all seek to gain control of it. This is the nascence of tendonitis.

Play a chord on the piano. Notice that you did not use your fingers at all. You used the hinge of the elbow to raise the hand up then allowed gravity to play the fingers down into the keys. Don’t let too much weight down because that will cause tension, just enough to play the chord evenly. Now do the same with single fingers careful not to isolate one of the unused ones.

Notice that the key is a fulcrum so, it is lightest on the outside edge. The keys are heavier on the inside black area. So it would behoove you to learn to play out on the edge. But, your fingers fall off the keys . . .

Notice each finger is a different length. To prevent them from falling off the keys you now need to employ an in/out motion from the shoulder and elbow. This movement makes the fingers equal. So that you don’t fall off the keys, each out motion must be accompanied with a forward shift movement THIS IS NOT PRESSING. Never press into the keybed.

If some of the fingers still feel stiff and weak, specifically your four and five, you need to realign the forearm behind those fingers when you play them.

There are several other movements but these would be the ones I’d start with to free the fingers so they can feel effortless - which they will because you aren’t using them.

When you combine all the movements of in/out, up/down, left/right, pronation/supination, forward shifting and constant realignment, your hands take on a shape or gracefulness and it is effortless because you are not using the wrong muscles to play.

Many teachers don’t know the physics and anatomy of playing which makes them a liability. There is an epidemic of repetitive stress injuries because people jump into playing an instrument or typing without ever learning the physics or ergonomics. Too many teachers start teaching their students to play before teaching them HOW.

I suggest you find a new teacher who knows what they are doing anatomically. Every teacher thinks they can teach but they can’t. They only know what they know but it is what they don’t know which will hurt you.

Re-learning how to play will be a difficult task as you have already hard wired (muscle memory) improper movement into your brain. The first thing is to never ever play your old repertoire again as your improper movements are hardwired into those songs.

Re-learning how to play is difficult and impossible for many. Some people don’t have the intelligence, patience nor dedication to retool their technique.

The first teacher a student has sets the stage for virtuosity or mediocrity. If they allow flaws into your technique, those flaws are there forever. That should be the new definition for virtuoso: Someone who moves properly.

Not the answer you're looking for? Browse other questions tagged piano health or ask your own question.

23
How do I begin finally making music on the piano?
4
Teaching unmotivated students
3
How to deal with constant time signature changes?
3
Wrist pain in advanced pianists
2
Stronger piano fingers
2
Is my strategy a good strategy?
1
Piano Memorization Techniques
2
How to apply the common 'don't play with your fingers' piano advice when playing scales?
3
Former classical piano student looking for my new musical path