Why aren't those consecutive fifth?

Here below is a sequence of chords C-G-C-E -> G-G-B-D in which, following the teacher who wrote it, there is no consecutive fifths. 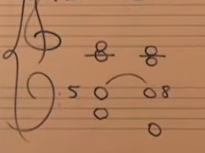 Why aren't C-G -> G-D, respectively present in those chords, considered as consecutive fifths ?

The common-practice prohibition on consecutive (better called parallel) fifths is about the same pair of voices, not anywhere in the chord. All root position major and minor triads will have a fifth somewhere, but it’s only considered a voice leading problem if the fifths of two consecutive chords are between the same two voices. In your example, the fifth of the first chord is between the bass and the tenor, and the fifth of the second chord is between the bass and soprano, so there’s no problem. The only ways there would be an error here is if either the soprano had a G in the first chord, of the tenor had a D in the second chord.

Again, any root position major or minor triads will have a fifth (always above the bass, and potentially between an upper-voice pair too), so if the rule prohibited any consecutive fifths all harmonic movement would be impossible.

Yes, in the first chord there's a 5th between the bass and tenor voices, in the second chord there's one between tenor and soprano. They're both 5ths, one comes after the other so in common parlance they could be described as consecutive. (And you'd be hard-pressed to find ANY piece of 4-part harmony that didn't constantly do this.)

But this is not what we mean by 'consecutive 5ths' in the language of music. The SAME pair of voices must form a 5th in adjacent chords. As @Tim says, 'Parallel 5ths' are a more explanatory name.

A (in my picture below) is not consecutive 5ths. B is. (And they both have consecutive 3rds, which is fine.)

Also note we're talking about the rules for a particular style of 4-voice writing. Different rules apply in 'species' counterpoint, and in styles that DON'T attempt to emulate Bach's chorale writing. And C would be perfectly acceptable in piano writing of any era.

Consecutive fifths are better called parallel fifths. Where two notes that are a 5th apart are followed directly by two others, the same fifth apart. Thus creating parallel motion in the piece. Other notes in other voices may muddy the waters, as here, but there are no parallel fifths. Which is probably what teacher meant to say.

You seem to mix consecutive fifths (as parallels of voices) with two consecutive chords in an interval of a fifth:

In music, consecutive fifths, or parallel fifths, are progressions in which the interval of a perfect fifth is followed by a different perfect fifth between the same two musical parts (or voices)

Like other answers say "consecutive fifths" in music seem to refer to fifth parallels (which must be avoided for reasons of voice leading and autonomy of voices.)

Maybe you mean this point:

you will always find a hidden fifth (which also should be avoided between the border voices -> tenor and bass.

So-called hidden consecutives, also called direct or covered octaves or fifths,[11][nb 3] occur when two independent parts approach a single perfect fifth or octave by similar motion instead of oblique or contrary motion. A single fifth or octave approached this way is sometimes called an exposed fifth or exposed octave. Conventional style dictates that such a progression be avoided; but it is sometimes permitted under certain conditions, such as the following: the interval does not involve either the highest or the lowest part, the interval does not occur between both of those extreme parts.

To avoid the hidden fifths the bass voice should be leaded a fifth up C-g or starting an octave lower: C-G

0
Counterpoint: Do parallel 5ths and Octaves count even if they are not from the same voices

5
Is this a hidden consecutive fifth?
20
"The intervals considered dissonant have changed since the 'Middle Ages'"; How so?
13
Why do we only build 7th chords on the supertonic and dominant of a major scale?
4
What are weak and strong chords?
3
Why does the first diminished 7th in this progression not resolve?
3
Preparation of dominant ninth chord
1
Why does the relation between E major and Ab major feel especially connected?
2
How to (decently) harmonize the modes of the "darkest scale ever"?
2
Is this passage from the development of K 545 another instance of the Circle of Fifths Progression?