I have a couple pedals that have either a dry out, Digitech Whammy or they are stereo effects, i.e delay, chorus. I have multiple amps; Bugera 333xl head, a line 6 Flextone combo, a Hartke 20 W Bass combo and a Fender Champ. So the possibility of using all amps..at home is there. But how to effectively and elegantly use multiple stereo effects with two amps on stage?

Note: The Bugera, Line six and Hartke all have effects loops.

Is this where those fancy Bradshaw switching boards comes into play?? I'm not a noob, but when it comes to setting stuff up, I get confused =-}

Thanks for replying everyone.

I may have found what I'm looking for.

guitar-effects amplifiers
Share
Improve this question
edited May 30, 2011 at 11:36

I'm going to give this one a stab because I think I know what you are going for and I see the complexity in your issue here.

First, let me restate your question so it's more clear what we're going for here. Given some number of pedals with wet/dry outputs, you would like to have a true stereo sound where the wet outputs are sent to your designated "wet" amp, and your dry sound travels through the chain to your main amp. The complexity occurs when you are running two simultaneous stereo effects. How would they mix? How can I control how and when they mix? I think you could solve this problem in one of two ways, both of which are closely related.

Option 1: Use a standard looper and hack it a bit. Take a look at this (poorly drawn) picture: 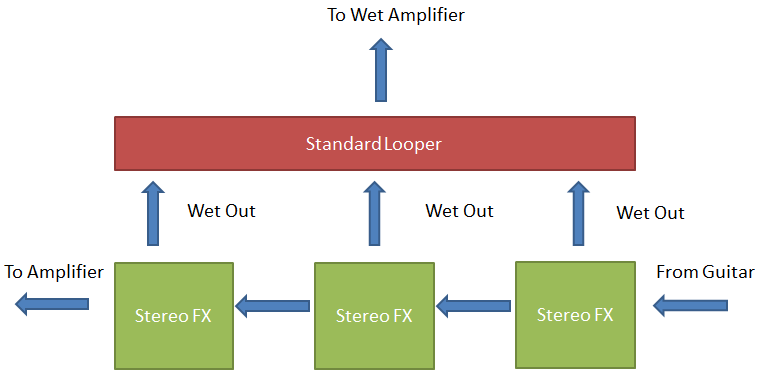 This one's easy enough to understand and probably the way I'd go. You simply connect all the stereo outs for the pedals you have to a mono looper and turn them on and off based on which effect you want. This would require quite a bit of tap dancing if you swap out sounds a lot, but would buy you the ability to remove specific instances of a pedal from your stereo sound whenever you like. If you use a looper already though you would have to add another one to your board--which could cause space problems.

Option 2: Use a stereo looper. Another powerpoint born masterpiece ahoy:

Stereo loopers allow you to pull the effect entirely out of the chain--both stereo and main lines. This would be useful because if a stereo effect is off, you don't really need it in the chain at all--unless you run into a caveat with true stereo pedals that I'll get to in a bit. If you go this route, you would likely need a stereo looper for your stereo effects and another looper for non-stereo effects which can result in nested loops, and that gets just plain complicated. This might be a good solution if you don't use many stereo pedals or they are localized to a single module on your board (i.e. delay, or modulation, etc).

The caveat I mentioned earlier is related to what some people refer to as a "true" stereo effect. Stereo effects as we know them usually have a wet and dry out, but some of them have true stereo on both left and right channels. This is a bit different, and results in the effected sound coming out both jacks in left and right channels (<rant>which is how it should be, but that's another issue </rant>). In this case, it might be beneficial to be able to entirely remove the stereo pedal from the chain instead of just the effected signal like I described in option 1. Alternatively, you may like the idea of playing the left (or right depending on how you plug it in) stereo channel through your primary amplifier while your wet amplifier receives no effected signal at all. If so, then choose option 1 instead of this.

So in summary there's not really any great solution for what you are trying to do without complex switching strategies. You can always build or purchase your own custom true bypass looper; the folks over at Loop-Master are great for that. I have provided a couple of easy to build or economically sound solutions, but you can always invest in a gigantic rack system that would achieve exactly what you wanted to the greatest degree of pickiness--including a nice programmable floor command center like the pros use.

It's not 100% clear to me what you're going for, exactly, but it sounds like you need a stereo A/B box. An A/B box is a footswitch that takes an input and sends it to either the A output, the B output, or some models allow you to send the input to both outputs. A stereo A/B is just what it sounds like: it takes a pair of inputs and switches it between two pairs of outputs. In fact, I'd recommend the Voodoo Labs Amp Switcher, since it can take a stereo input and route it to any combination of up to four amps, which sounds like what you're talking about.

Some (many? most? all?) A/B boxes can also work in reverse. That is, they can switch between multiple inputs and send them to a single output (again, in stereo if you have a stereo A/B box). This is handy if you have multiple guitars, and it might work for your multiple-stereo-effects situation too.

Not a real answer for what you are trying to do, but an alternative, and one I swear by for live gigs where I use a lot of different effects:

I program them all into a Line 6 Pod X3 Live and have them stored as sequential presets, so where I need to pop the delay after an effect then switch them round for the chorus I just tap the adjacent footswitch. This way I can get full stereo (so typically I use a fractional delay between left and right channels to widen my sound) and the path for wet and dry sound is all configurable within the pedal.

The only problems come when you want a sound that it can't do - for example the Digitech Whammy multiple octaves up or down - but there is an effects loop which lets you pop that into your preferred place in the chain.

Not the answer you're looking for? Browse other questions tagged guitar-effects amplifiers or ask your own question.

23
Why is an amplifier's effects loop useful?
22
Multi-Effects Pedal or Multiple Effects Pedals?
2
Using a looper live - how to connect playback and overdub to 2 different amps?
2
Distortion effects pedal to amp
1
True Bypass Looper and Effects Loop
4
Where to apply my effects pedal?
3
Do I need an effects loop in a bass amp?
5
What is the difference between parallel and series effects loop
3
Loop pedal volume in effects loop not controlled by amp volume controls
2
Grounding issue with multiple guitars and multiple amps in multiple rooms