Should a guitar's neck be parallel to the body or at an incline/decline?

I have a guitar here and noticed the neck inclines ever so slightly off the body: 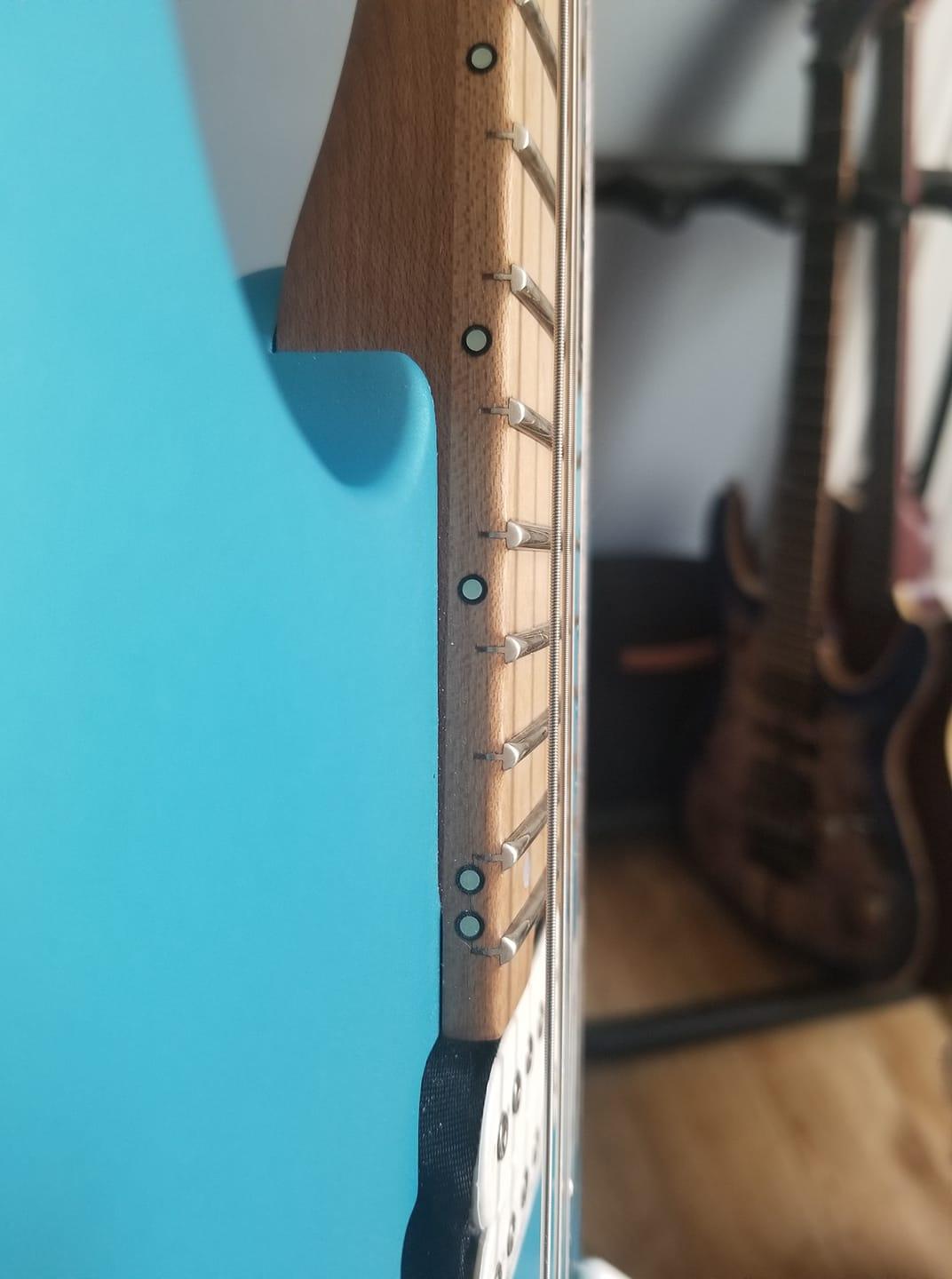 None of my other guitars seem to do this: their necks run parallel with the guitar body. You can see in the image, thanks to the fretboard being a different shade of brown, that there's an angle. Shouldn't the "angle" be zero?

I just wonder if this is a defect and if so, whether it's fixable with a setup.

It may look funny, but this is not an indication of a bad setup. Necks may be shimmed or set at a slight angle to achieve the proper action.

Check if you have buzzing on any fret and if the action is appropriate. If it plays well, then it's fine. If there are problems with action or intonation or buzzing then you'll need a setup, but not just for the neck angle.

Should a guitar's neck be parallel to the body or at an incline/decline?

I agree with the answer given by luser droog and would add that you are assuming that the top of the body is perfectly plane in two directions and it may not be. At the end of the day on a solid body electric the body is just a platform for the neck, bridge, and electronics. You can float the bridge (as with a 2 piece tune-o-matic on a Gibson) and as long as the plane of the fret board can be brought into alignment with the bridge, all is good. In fact the fret board doesn't even have to be a plane, e.g. look at the scalloped job on Yngwie's ax. The frets need to be properly level. It might seem ugly and if you paid top dollar for a brand name guitar this is the kind of thing that makes you shake your head but it is not an indication of a serious problem.

I would guess that, with this sort of guitar, the Fender-style bolt-on, you will have problems getting the action low enough. The height of the saddle itself will hinder your efforts. This was certainly true of my 1988 MIJ Telecaster.

(Les Pauls have an incline, but generally the other direction, so that the strings are further from the body at the bridge than when they left the neck.)

I decided to shim the neck: I cut a business card into appropriate shape, placed it into the back of the neck pocket, and screwed the neck back on. There are some that would say, with the business card being paper and thus soft, I've lost sustain and tone, but I'm happy with it. You can buy maple shims from places like StewMac, or bring it in to your local luthier for this work.

By changing the neck angle, it raised where the saddles would be for the same action, allowing me to get the action to where I needed it. This could be a thing your luthier takes care of in a setup, but if you don't notice a problem with your hands, you shouldn't stress.

Not the answer you're looking for? Browse other questions tagged guitar electric-guitar guitar-neck or ask your own question.

1
Is my guitar's neck supposed to be angled upwards?

2
Leaving guitar body without the neck
5
Does an adjustable bridge need to be parallel to the frets?
3
Adjust left / right angle of guitar neck?
13
I cannot spread my fingers easily. Am I anatomically disadvantaged for playing the guitar?
3
Guitar hums even when only pickup is wired
2
F barre chord on an SG guitar
2
Putting (almost any) pressure on guitar neck warps sound
2
Guitar Intonation Problem, Always Sharp
3
Recommended thumb position and motion when using a thumbpick on an acoustic guitar
3
Is my guitar's neck too soft? How do I keep open string notes from wobbling when playing chords on lower frets?