I have just been listening to Beethoven's Eroica while following a miniature score: Eulenburg score at Amazon.

I was paying particular attention to the double basses and I noticed that frequently they went down to the E♭ just below the bass clef (in notation so actually an octave below that). This is not surprising since the piece is in E♭ but it is a semitone below the bottom note of a standard double bass. I was listening the Vienna Philharmonic who use 5 string basses and hence can access this note: Bluray at Amazon. Some other orchestras have basses with a C extension and they could also play this note.

I wondered what would be best if an orchestra (maybe a school or amateur one) with only standard basses wanted to play this piece. The options would seem to be:

For 2, remember that this is likely to be an amateur orchestra so the instruments may be reasonable but not exceptional. Similarly the players' skills would probably not be professional. The mistuned string might be very confusing.

As a variant of 2, we could tune all the strings down a semitone and transpose their part. Provided that they did not have perfect pitch, they may be able to play normally but in E and C♯ minor rather than E♭ and C minor (a retune between movements would not be practical). So, the bass would be a transposing instrument at a minor 9th rather than its usual octave.

Update. I just scanned my score of the 9th (same publisher). I expected to find some low D. I did but I had to scan surprisingly far to find one. I found the even lower C♯ first. In the second movement, I found a low C♮. So, option 2 certainly would not be practical. My scores give no alternative lines even when the double bass has a distinct staff from the cellos.

I would strongly advise against Solution #2 (tuning the string down). Especially if this is a school/amateur orchestra (as you say), this could wreak absolute havoc. I have enough experience giving, for example, B-flat trumpet players C parts to know that this all too often leads in disaster.

In the absence of C extensions, Solution #1 is really your only bet. And honestly, this seems to have been the main solution throughout history. In most spots, moving the E-flat up an octave will hardly even be recognized, like in this brief V–I motion towards A-flat: 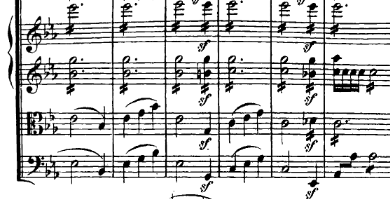 But there are other spots where changing the octave could destroy the larger musical line:

But note that some publishers (like Braunschweig edited by Litolff, or the Eulenburg full score edited by Unger) specify a split in the instrumentation:

My suggestion would be to find one of these scores that already has these splits decided. Whether these splits are from Beethoven or from an engraver/editor I unfortunately cannot say.

Beethoven wrote those low notes even though he knew they were not playable on the instruments available. The subject of Beethoven's disregard for the range of the bass has been much discussed. Stephen Buckley has written a dissertation on the subject: " Beethoven's Double Bass Parts: The Viennese Violone and the Problem of Lower Compass". One of the possible reasons he gives is that it was common then to double the basses with contrabassoons. Here's the abstract:

This study addresses the discrepancy between the range of Beethoven's double bass parts and the instrument or instruments in use in Vienna in his day. Scholars and musicians have complained about Beethoven's apparent disregard for the instrument's capabilities since the middle of the nineteenth century. A systematic examination of Beethoven's orchestral writing for the double bass shows that this reputation is undeserved. In fact Beethoven paid close attention to the lower compass of the double bass throughout his orchestral writing: a clear boundary of F is observed up to op. 55, and thereafter E, though F still obtains in some late works. Beethoven's observance of the F boundary suggests that he was writing for the Viennese five-stringed violone, and not the modern form of the instrument, as has previously been assumed in scholarship. Other evidence pointing to the use of this instrument is presented. Some of Beethoven's bass parts between op. 55 and op. 125 do in fact descend to C (sounding C1); yet there is no evidence supporting the existence of a double bass instrument capable of C1 in Beethoven's day. Possible explanations for these violations of the compass of the double bass are discussed. These focus on the possibility of simple proofreading error, and on evidence for the unwritten practice of reinforcing the double bass with one or more contrabassoons. The contrabassoon in Beethoven's day had a lower compass of C1, and Vienna was an early center for its production and use. Analysis of the bulk of Beethoven's double bass parts for their range is given. Emphasis in this analysis is given to instances where Beethoven demonstrates a clear awareness of the compass of the instrument. Out-of-range pitches are compiled in table form.

Buckley's article in the Online Journal of Bass Research also discusses this.

Nowadays professional orchestras always have some (if not all) of the basses capable of playing down to low C.

If you're in an amateur orchestra and don't have an extended range instrument, you have to do whatever works best for you. Probably just taking those notes (or maybe phrases) up an octave is the easiest solution. All you lose is a bit of weight on those notes. If you feel comfortable tuning down the lowest string then do it.

The answers by @Richard and @PiedPiper already give excellent advice and detailed information relating to this specific piece. I just wanted to give a succinct, practical-advice answer for any future readers:

Sure, you could rewrite the parts to show notes that you want up an octave, but you could instead annotate the parts in pencil before rehearsals, or even better, get the players to pencil these changes in themselves if rehearsal time allows.

If you really want to rewrite the parts, this kind of notation can be useful, showing the pitches you want played, but alternative pitches if the basses don't have an extended range:

Tuning down can work in some limited contexts. I've seen it done for a single low E-flat or D surrounded by rests or at the end of a movement, played as an open string. So confusion over changing fingerings for other notes was not applicable, and the bass was re-tuned for everything besides that one note. (I could think of it almost like re-tuning timpani.)

This was in a student orchestra, and the teacher was a bass player, so I assume he knew what he was doing.

Although this would not work well with your specific example (Beethoven 3rd) it might work in other places.

Not the answer you're looking for? Browse other questions tagged arranging orchestration beethoven double-bass or ask your own question.

9
Why are melodies typically played or sung by high voices or instruments in an ensemble?
4
Is it common for an orchestra to have 5 string double basses?
1
Advice on arranging piano music for wind quartet?
2
Should I raise this chord up an octave?
1
How should I write a tutti chord?
2
Orchestration question: Should I change which woodwinds get which lines?
9
Why is Beethoven's tempo so off?
3
What are some good options for playing a note written below the standard range of a double bass?
1
Do I need to worry about Tympani glissando here?
7
How do you play a low Eb on a double bass?