Is the bass clef the same thing as a question mark? How are they related?

Why does the bass clef look like a question mark?

It may look a bit like a question mark, but it's not the same thing, and they aren't related.

To understand the evolution of the clefs, we need to go back a bit in music history. Because of this, I'll actually be showing you some four-line clefs (as opposed to our modern clefs with five lines).

But we begin with the notion of a C clef: this literally puts a little "C" somewhere on the clef to tell you where the C is located:

Following this logic, we can also have an F clef, which puts an F (or something like it) to show where the F is located. Here are three historical variations (not necessarily in chronological order):

With this evolution in mind, I think you can see how we ultimately got to the present bass clef, clearly an F clef because the two dots surround the F: 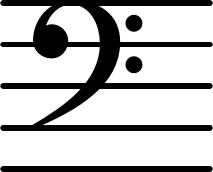 To answer the 1. part of your question: If you think it looks like a question mark this your personal impression and association, and it can't be answered like you were asking: Why looks the letter F like a flag?

The second part is the conclusion of the 1. point: Not at all! They are not related and have nothing to do with each other.

Like Richard has shown the F-clef has been developed and transformed from the letter F which was the root tone of the mixolydian tetrachord.

Willi Apel describes it in his book

Here, as in many cases of manuscript music, the chief difficulty lies in the obscurity of the handwriting rather than in the intrinsic problems of notation. The clefs are those of modern practice, namely the G-clef in the upper staff, the F-clef in the lower one. The G-clef is a G with, a loop added whereas the F-clef is a sort of C followed by a sign which looks like two minims turned head to head. This shape is explained as a gradual transformation of the letter F. Here follow certain of the main forms of the F-clef, in chrono logical order.

Riemann shows an even larger row of transformations of the F-Clef in his book:

The bass clef is a letter F, which points to where the F note lies, i.e. the second line from the top.

In a similar way, the treble clef is a letter G which points to where the G note lies, i.e. the second line from the bottom.

They are completely different. A bass clef is a music symbol, and a question mark is a punctuation mark.

The bass clef is a symbol that indicates low pitched notes. The bass clef is placed at the beginning of a music staff to indicate that the following notes are written in the bass clef. It is also called the F-clef because it originated from a fancy letter "F", and the 2 dots of the bass clef surround the F line right below middle C in the bass staff.

A question mark is a punctuation mark that is used to end a question sentence.

So no, they are not related at all whatsoever.

10
Do the F clef and G clef always reside on the same line?
15
Why is the bass clef indicated twice on the same line in this Bartok piece?
3
Grand Staff using the Bass Clef and Treble Alto-Tenor Clef
2
When are the historical landmarks in the evolution of the bass (F) clef?
9
Can the treble clef be used instead of the bass clef in piano music?
5
Two dots below a note in the Bass Clef
3
Where should I put the bass clef? Before or after the repeat sign?
4
Clef of the lower staff does not look right in Lilypond, how to fix?