If the resolution of human hearing is approximately five cents, how can musicians play works with intonation changes of less than five cents?

Sources1 suggest that the frequency resolution of humans—our ability to discriminate differences in pitch—is limited to around five cents.

If this is the case, how can musicians play an excerpt like the following (listen here, and be sure to check out 0:22!), which demands intonation changes of as small as two cents? (The numbers written above/below the pitches are the changes, in cents, for the tuning of each pitch.) 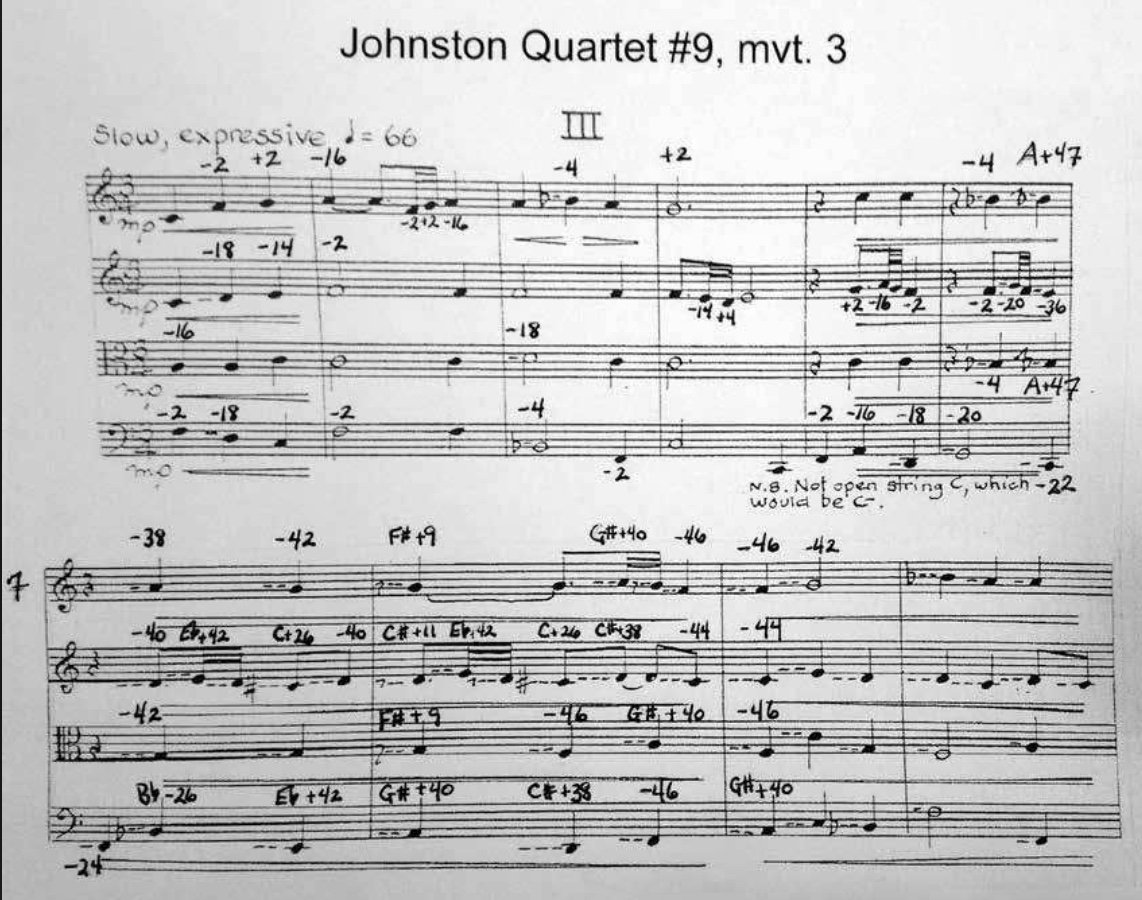 This is spectralist music, so the intonation changes (at least in the first five measures or so) are based on the harmonic series. As such, the first violin may not be thinking of moving the F down two cents, but rather creating a justly tuned minor third with the cello. In other words, the first violinist isn't just tuning their single pitch down two cents, but they're tuning the interval itself. This all makes sense to me, and explains how a musician could hear this particular difference of under five cents.

But if all of this is true, then it seems to suggest that the first violinist can't actually play their part alone without the aid of a tuner. Am I missing something?

1 Just to limit these sources to SE sites, see here, here, and here.

With a bit of training, a good musician can hear differences of 2 cents, and with significant talent and/or a lot of practice, 1 cent.

I base the above statement on my personal experience with developing ear training software for musicians. For example, I have been working on an app for training musicians to tune a guitar or a piano, purely by ear. This software is not published yet, but I can tell you that with some practice both myself and a few other beta testers have been able to routinely reach a precision of 2 cents. On a good day, we can occasionally hit one cent.

So, answering your question: the sources that put the limit at 5 cents are not correct. 5 cents is not a difficult interval to hear (with some training) and I would put the limit at no more than 1 cent for people with a good musical ear.

And by the way, Ben Johnston performers are known to practice for years and years before being able to record a good take of his compositions, so while it's possible, it's not exactly easy... :)

(Should anyone be interested in beta testing the upcoming ear training app, write me privately)

I agree with answer given by topo Reinstate Monica. I would also add that in addition to the pitch discrimination threshold being frequency dependent and NOT absolute, this explains a person's ability to judge the difference of two notes played separately. A whole new set of acoustic and mechanical phenomenon occur when harmony is involved. When listening to notes played together one will be better able to judge slight variations in pitch against the harmonic background. The use of contrast here is a very common device in music and art. As an extreme example consider tuning a musical instrument like the guitar. We play the fifth fret harmonic of the low E string and attempt to match it with the seventh fret harmonic of the A string, both being an E. As we tune the A string we will hear beats between the two notes. The two notes are in tune relative to each other when the beat period is infinite (something we never really achieve). The point is, at that point we are not hearing two notes but a fused tone and its envelop. Our ability to judge the envelop as being flat is, as far as I know, only limited by our life span (if you are willing to sit that long, and the acoustic energy does not dissipate). When listening to harmony we will hear similar phenomenon in the interaction of the harmonics of each note. So, hearing A followed by A (+2) in a lab may not be perceived as different. But hearing the interval (A, E) and (A(+2), E) may be noticeable.

Not the answer you're looking for? Browse other questions tagged tuning intonation hearing just-intonation or ask your own question.

63
Why Is Just Intonation Impractical?
2
Dealing with over sensitive tuning knobs
2
If an ensemble plays using just intonation, is it true the ensemble will always go sharp?
10
How did Pythagoras and Ptolemy measure the relative pitch of musical notes?
9
How can I improve my violin intonation for enharmonic notes?
3
Modal playing on an instrument designed for just intonation in the major scale (specifically dulcimer)
0
Guitar pitch changes with pressure applied to neck
3
What is best practice for tuning a mandolin?