How do tonewheel organs sound coherent? 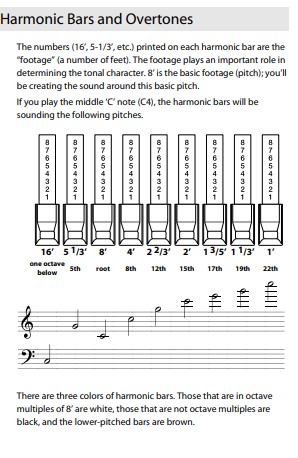 So there are notes that the key nominally doesn't play in an organ note if the drawbars are pulled out. Yet if I pull all the drawbars out and play a chord, it sounds like a coherent chord. A C minor chord supposedly has present, beyond the octaves, two Gs, an E, and an F; two G sharps, an F, and an F sharp; and two Ds, a B, and a C. Yet I don't hear the implied Bdim or any other chord implied by that combination; just a C minor. Why is that?

To add to Judy N's excellent answer, I would say a few words about the theory behind this approach to tone synthesis.

In the nineteenth century, research into acoustics (notably by Hermann von Helmholtz) showed that any sound wave can be decomposed into a series of sine waves of different frequencies. In general, the frequencies are all integer multiples of a "fundamental" frequency (a notable exception is the sound of bells and other stiff vibrating objects). The tone quality of the composite sound is directly related to the relative strengths of the various sine waves.

In practical terms, this means that an oboe, a flute, and a clarinet playing a pitch of 440 Hz will all have overtones at 880 Hz, 1320 Hz, 1760 Hz, 2200 Hz, etc., but the amplitude of a given overtone will be different for each instrument. (For example, the even overtones, 880 Hz, 1760 Hz, and so on, will be absent or nearly so in the clarinet. You can simulate this on the drawbar organ diagrammed above by drawing the root, twelfth, and seventeenth only.)

The drawbar organ is an early additive synthesizer. The idea is that you can generate several pure sine waves with frequencies that are integer multiples of each other and combine them to produce a complex wave. Depending on the relative strength of the component sine waves, the resulting complex wave with have a tone resembling a flute, and oboe, a clarinet, or what have you.

This has also been done with acoustic pipe organs, which may have stops called mutation stops. These existed long before the nineteenth century, so practice preceded theory here. Mutation stops may be included in mixtures, which function rather like a synthesizer preset. This tradition is the source of the numeric labels on the drawbars.

You may also be interested in Wikipedia's article on synthesizers.

Firstly, I'm not able to comment but you must have made a mistake in writing out all the notes you think you would be getting. Taking a C minor triad C Eb G, you will have: The corresponding notes an octave below, and one, two and three octaves above; The perfect fifth above each note, plus two further octaves. This gives G Bb D The note two-octaves-and-a-major-third above each note. This gives E G B. So all the notes we have are C D Eb E G Bb B (tho - importantly - not in that order!)

The reason why it sounds like a coherent chord is exactly the same reason as why if you play a single key it sounds like a coherent note. And the reason for this is the harmonic series - is this something you know about? I don't want to go into a massive amount of detail because I'm sure there are many authoritative sources you could consult. But in brief, when we make a traditional physical instrument play, what we are doing is providing a source of energy to something that, because of its physical properties, is inclined to resonate at a particular frequencey. E.g., blowing air across a pipe of a certain length inclines the pipe to vibrate at a rate determined by the length of the pipe and the speed of sound - the natural laws of physics find the frequency that it's 'easiest' for the pipe to vibrate at. But if a pipe finds it easy to vibrate at a particular frequency, it will also find it easy to vibrate at any whole multiple of that freqency - this is like dividing the pipe up into equal parts and each of those parts vibrating at the frequency that 'works' for the length of the part. If we divide into 2 parts, the pipe will vibrate at double the freqency. 5 parts, it will vibrate at five times the frequency. These are called overtones. Have you noticed anything here about the markings on the drawbars? They in fact correspond to dividing the "fundamental" (i.e. longest) length of the 'pipe' in half, into a third, a quarter, a fifth and so on. So the drawbars mimic what happens in nature when we make a pipe of (nominally) 16 feet vibrate - we get additional vibrations corresponding to dividing the length of the pipe into a whole number of equal parts. As such, the sound we produce appears very naturally to the human ear as being the sound of one thing resonating, and so we experience it as being a single note. And in fact, the relative prominence of each of these overtones actually forms what we experience as the "tone" or the "sound" of an instrument - it's how the human ear distinguishes between the sound of a pipe resonating and a guitar, or a harp, and it's how brass and wind players can create different sounds out of their instrument, by changing -how- they applying resonating energy to their instrument, to make some overtones "easier" to appear.

So when we get all of these notes being produced all at one, our brain simplifies it out by hearing the higher parts as merely being a physical effect of the lower parts - that is, the E two-octaves-and-a-major-third above the C is heard as being an overtone of the bottom C. And this is why different drawbars produce different tones from the organ!

Not the answer you're looking for? Browse other questions tagged organ overtones or ask your own question.

1
How does the perfect fifth truly work?
10
How to deal with the extreme reverberation in big cathedrals when playing the pipe organs?
5
How to improvise on organ
20
Which accidental continues through the bar?
23
Why don't organs have weighted keys?
2
Flutes in octaves sounds like an organ? Why does this happen?
3
How can our ears decide which pitch a sound is, if it has a lot of overtones?