Diminished seventh spelling but functioning as an Augmented Sixth?

I know that there are many ways to resolve a diminished seventh chord, but only a few ways to resolve an augmented sixth chord. I have done modulations from the minor tonic to the major subtonic using the spelling of vii°7 several times in my works and I thought I was maybe using a common tone diminished seventh chord. That is, until I looked more closely at how the notes move. Here's just one example of such a modulation with a Roman Numeral Analysis in both the minor key it starts in and the key it ends in.

As you can see, this modulation is one of those cases where the vii°7 vs Aug6 is not so cut and dry. On the one hand, the second chord moves similarly to your typical augmented sixth, out to an octave leading towards a cadence. On the other hand, the same chord is completely diatonic in C minor, the key it starts in, being the vii°7 of C minor. Augmented sixth chords tend to not be diatonic to either the starting key or the ending key when they are used in a modulation. So, here it is from the common tone perspective:

This seems to be the more natural way of viewing things given the spelling of the chord as a diminished seventh and the fact that the chord is completely diatonic to C minor, the starting key. But how does the Common Tone Diminished Seventh typically resolve? Typically, it resolves to the tonic or the dominant. Less commonly, it will resolve to either the ii or VI chords of a minor key. Either way, it typically has the same root note as the tonic chord. That certainly doesn't seem to be what is happening here. The bass is moving chromatically down from C to B♭. If a common tone diminished seventh is involved in chromatic motion, it typically moves upwards in the bass, not downwards.

I would say that your definition of a common-tone diminished seventh is too narrow.

But none of those things must be true; all that's required for a common-tone diminished seventh is that there is at least one common tone between it and a surrounding chord.

As such, since this chord has both a D and an F in common which the succeeding B-flat chord, I'd call this, without hesitation, a common-tone diminished seventh.

(But I do really like your notion of hearing this as related to an augmented-sixth resolution!)

Your question gets into one of my favorite aspects of minor key harmony, the connection between iiø7 and viio7. Both share three out of four tones, only one tone changes by half step, but the two chords have different functions: dominant and subdominant. That's interesting how it changes functional categories. Compare it to changing IV by one tone, moving ^1 up to ^2 for a ii6. In that one tone change the two chords maintain the same function of subdominant types.

When the F is added to make a French augmented sixth, it's really an altered iiø7 subdominant chord... 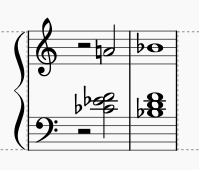 That all is just to show the phrygian cadence/subdominant origin of augmented sixth chords.

Like @RosieF I respelled your B♮ as C♭ . That makes your chord C♭ D F A♭. You could call that some kind of leading tone diminished seventh chord, but it does not move that way when going to a B♭ major chord. 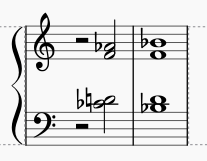 But notice that C♭ D F A♭ contains all the tones of iio in E♭ minor... F A♭ C♭. I think the augmented sixth chord sound you are hearing is really the phrygian cadence sound. To make that clear I think you could identify the chord as a iio6/4/♭3 chord rather than a viio7 chord. To really spell it as that chord you need to enharmonically respell the D as E𝄫. 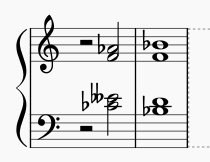 Maybe that enharmonic spelling is too tedious, but it certainly makes clear it is not viio7 in C or E♭ minor.

(Writing the Roman numeral analysis figures is tricky with these chords. I tried to follow the system of adding accidentals to altered roots for the Roman numeral, and + to raise or ♭ to lower a Arabic numeral by half step from the key signature of E♭ minor. Please comment if you see a correction I should make.)

It is true that, as you have notated it, that second chord is diatonic in C minor. But in C minor, B is the leading note and typically resolves to C. In your case it moves down to B♭. So, on the grounds of voice-leading, I'd notate it as C♭. The chord is then vii°7 of E♭, and the next two chords are V I in E♭.

Not the answer you're looking for? Browse other questions tagged harmony analysis functional-harmony or ask your own question.

3
How can one analyze this chord progression from "Vienna" by Billy Joel?
7
How does a minor major seventh chord have tonic function when it's so unstable?
1
Can an augmented sixth lead straight to tonic?
3
Modulation from D major to D minor, should I go sudden or gradual?
2
What is this chord in Grande Valse Brilliante?
5
How to determine the degree to which diminished seventh chords and half-diminished seventh chords belong in major scales?
4
Diminished 7th notation, match the key or key signature?
3
Diminished seventh cadence, is this an IAC or a PAC?
2
How is D7 functioning here? Applied chord both kind of does and doesn't fit
14
Is this chord from Bach's C major Prelude G+ or Cm?