A chord with only the root note

I have this strange thought over which I argue with people. If a chord is a set of distinct tones sounding simultaneously (or one after another like in arpeggios) then for instance a root C in the bass together with a few more C's on other octaves should also be called a chord. For instance we have four notes which are C on the piano in different octaves - they are all distinct tones. Not the same note in terms of hertz and position (unlike on the guitar where we can have two or more same notes in an octave but they would sound different). Yet, in musical theory the most simple chord should consist of a root, a third, and a fifth. However, a two note chord with only the root and the fifth is called a power chord (C5 for instance), but we don't have a chord for only the root and the third, whether it be the minor or the major third. But then how do we identify the chord if it does not have a minor or a major third?

So in terms of piano keys what is a chord?

what is a chord?

In other words, what does a chord do. If you encounter something that doesn't do those things, then you shouldn't call it a chord in that sense. (The "is" word is called a copula https://en.wikipedia.org/wiki/Copula_(linguistics) and your question is basically a general request for explanations about the problem domain where the word "chord" is used - and the answers better be focused around sentences about doing, not other copulas)

What does a chord do?

Chords explicate, bring out several features about the harmonic context at the same time. Chords are capable of explicating more features per time unit than a single-voice melody line, so they have more harmonic expressive power. Chords are harmonic bulldozers compared to single-note shovels.

When you listen to music, your ear constantly tries to keep track of a few important things:

The harmonic context around the tonic is defined in a space of one single octave. A single note, say, C, can only explicate "C". It doesn't say which octave, because there are no octaves in the harmonic context. The set of octaves and that kind of spacing has more to do with timbre than harmony. If you have a chord C, E, G, you can voice it in many ways by spreading the notes in different octaves, and it will create a different sound, but harmonically it still only does the same thing any C major triad does. It says three things: (1) there is a C, (2) there is an E, and (3) there is a G. (plus, the lowest note is an extra feature, but IMO that's not relevant for the chord vs non-chord question)

When you have one or two or three or a thousand different sounding C notes, even the whole mass of them only says "there is a C", that's all. That's a very weak harmonic device! Definitely not a bulldozer. The so-called "power chord" is actually a weak harmonic device, not harmonically powerful at all. It is powerful in terms of timbre and for putting more weight to its root note.

If you hear an F major chord as the set of currently sounding notes, but in your mind you've established C major as the tonic position and shape, then you feel that you're not at home. You want to hear a C major to make yourself feel that you returned home. Or at least a plain C note that leaves room for imagining the C major around it. If you only hear a single F note, it doesn't leave room for imagining this - you are not at home with any stretch of imagination ... unless you keep playing the F note for so long that in your mind you move your bed and fridge there. This usually happens in about a minute.

Language is always used in a context. What is your context? When is it justifiable to call something a chord? Will doing that labeling be good or bad for your intentions?

Is this a chord? Is it major, minor or suspended? Cluster chord? If you heard that played, would you say you heard a chord? Did you hear one pitch or multiple pitches? Regardless of instrument? If you sample this, can you play melodies with it? Can you play other chords with it? 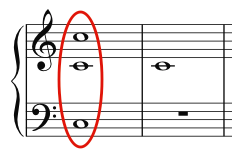 How about this one, is it a chord? 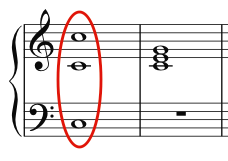 Is the following a chord? The two half-notes in the first bar are most definitely chords, but would you say it ends on a non-chord? 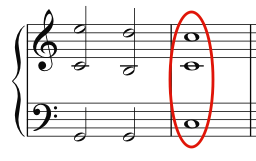 Consider your context and make up your own mind. :)

The standard concept of chords is stacked thirds. That is, given a scale, start at some point and take every third note.

If you take three notes in this way, the chords are called triads.

Now, in case of power chords, you are already stretching the concept to some extent, and indeed some theorists would say that two notes do not a chord make.

In case of a two-note chord made of a root and a third, personally, I would still call it a major or minor chord. Indeed, removing the fifth from a chord is less extreme than removing the third. In other words, to my mind and to my ear, C-E (C major without a fifth) sounds more like a chord than C-G (C5 or C power chord).

But when you take it to the extreme of having just one note, even if at different octaves, I think that's stretching the concept of chord one step too far -- you've just got one note.

There are various definitions of 'chord'. Some say two distinct tones are sufficient. Some insist on a minimum of three. But there's general agreement that 'distinct tones' means 'distinct pitch classes'. The same note in another octave counts as one.

Now, is ANY group of tones a 'chord'? Is it still a chord if it can't usefully be given a name?

Is the dyad C,E sufficient to be defined as C major? (Remember Harmony 101 where we're taught that in Bach-style 4-part writing 'the 5th may be omitted'?)

How about a cluster. C, C♯,D, D♯ ? Probably pointless to attempt naming it, but is it a 'chord'?

We're now in the territory of 'Topic For Discussion' rather than 'Question With a Definite Answer'.

It's definitely a chord, though it is very poor in harmonic information.

It does not provide any definitive clue on the tonality or the role inside the tonality, etc.

However, as it very strongly sets the note that it is stacking up, chances are high that it is the tonic (1st note of the tonality, e.g. C in C Major). Or maybe, next likely, the dominant (5th note, e.g. G in C Major).

The conductor of a symphony orchestra, during rehearsal, would probably refer to that as unison doubled at the octave.

A music theory student would be chastised for calling it a chord. A chord must have three or more notes, by definition. However, it could be called an implied chord if the context justified it.

An atonal composer would refer to it as a simultaneity composed of a several pitches but only one pitch class.

A computer programmer writing, say, an Ableton plugin, might call it a special case of a chord, and it would be reasonable for a chord generator to allow for chords composer only of a single note at various octaves.

If you look at it that way, the unison chord is the identity operator of the chord construction operation. You add no extra harmonics to the root note, but you could still see it as a chord.

7
Is the bass note of a chord the only indicative of its [the chord's] inversion?
5
Fingerings for root-position Seventh Chords on Piano
4
What is a chord consisting of Root, 9th and 11th called?
3
What is the name of a chord with the root note played twice?
1
How to understand a minor chord using the harmonic series?
3
How do I determine the "bass" tone of a major or minor chord?
2
How am I supposed to orchestrate a D7 when the chordal seventh is emphasized?
1
Tritone substitution in minor, just change the root or change the chord quality too?
7
What is the physical mechanism by which a chord has a root?
2
What is it called when the chords contain the same notes but have a different root note of a chord and different chord name?