Is there a term in English to characterize the male/female bipolarity of major and minor tonality?

Is there any association of dur and moll with male and female like in European compositions to define the polarity of major and minor tonalities in orchestral works like symphonies?

To avoid any misconceptions I want to emphasize the terms dur and moll are neutral or used without article. My question concerns the qualifying them as feminine or masculine by their character in sound or historical use.

Tongeschlecht is one of those words that doesn't get translated very well (or easily) into English sources. Depending on context, it might refer to English language concepts of genus (e.g., referencing ancient Greek tetrachord tunings) or mode (whether major/minor or church modes) or (chord) quality.

In any case, none of these concepts are particularly gendered in modern English-language music theory. The Susan McClary source you quote is from her general work critiquing the use of gender concepts in music. (She wrote an entire book called Feminine Endings whose title was playing off of an old-fashioned set of terms for cadences that arrive on or off a beat.) In general, largely because of her work and others, the artificial gendering of musical concepts has been under a great deal of scholarly criticism in recent decades, so it's very unlikely that the male/female gendering of chord qualities or keys would be received well.

Anyhow, this is one of the few places you will see this brought up in professional literature on music theory (generally in direct reference to the original German sources). That's not to say that no English language theorists have used the male/female dichotomy in reference to major/minor duality, but those who do generally are assuming readers who are familiar with the original German sources that make this distinction. I don't remember what Alex Rehding says about this in the book you mention (and I don't have my copy handy) -- my recollection off the top of my head is that gendered metaphors for tonality were a little more common in English-language theory in the 19th century (as well as the "natural"/"unnatural" rhetoric McClary mentions, which comes out of 18th-century concepts about the harmonic series and the derivation of major triads). In general, the gendering of tonality (and related concepts, like male/female duality of sonata themes, the gendering of cadences already mentioned, etc.) is widely viewed with suspicion by modern English-language scholars as an artificial concept, so it hasn't gained wide currency in English.

In my studies I have not come across a gender designation concerning the quality of the Major/Minor keys. Instead, the quality is generally described as "Bright and Happy" for the Major keys and "Somber or Sad" in describing the Minor keys. However, since you posted this idea, it has started me thinking about trying to notice any gender specific aspects of Major and Minor keys. I don't know what word would be used to classify this kind of association, but I would understand what you were talking about if you were to refer to it as gender recognition. Since modes also have Major and minor aspects to them, it makes me wonder if these gender designations also apply to the modes?

It would be surprising to me that so much of European theory (e.g. Hugo Riemann, Arnold Schoenberg, Willi Apel) has been translated to English and is well known in American music literature - but this terminology of a male and female principle of tonality and harmony shouldn't have been translated ...

But now I want to know what is to find in the English editon of the Riemann's Dictionnary!

and what articles have been published about this subject:

stable- music, whereas minor is artificial, intelligible only in subordination to major. ... pairs forms a conceptual whole: day-night, male-female, inhaling-exhal. ...

Hugo Riemann and the Birth of Modern Musical Thoughtbooks.google.ch › books Tone relations ( Tonverwandtschaft ) , a term from modern speculative theory , which ... those of the same harmonic gender ( both major or minor ) whose principal tones are related to ... 79 , he finally offered 197 Glossary : Riemann ' s key terms.

Susan McClary quotes A. Schönberg in her book: 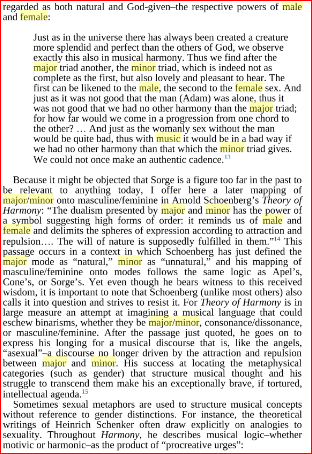 8
What is the word to describe the aspect of a chord being either minor or major?

29
How many (major and minor) keys are there? Why?
4
Why are there major and minor intervals?
4
Is there a standard term for "has the same notes"?
7
Why does the English horn have a French name, and the French horn an English name?
1
What is the blues term for the note between the minor third and the major third?
2
Varied bass line and varied tune: What is the term used for this style?
4
Who has brought up the English term **figured bass** for thorough bass?
3
Term for conversion between different tonalities (C major to C minor, etc.)
3
Is there symbolism in Brahms No. 1? How does this, and the "struggle between major and minor," square with his views about absolute music?
3
Term for Major Scale with a minor seventh