Which way do I put the violin blanket?

I was wondering which way do I put the violin blanket in a violin case because there are two sides, one that is soft and one that is hard(ish) made out of plastic (or whatever material it is). I want to take care of my violin really well so I want to know which way so I don’t damage it because currently I’ve been putting the soft part on the outside and the hard part on the inside, touching the violin.

I don’t really get which is which when you talk about soft and hard parts.

I would rather say there is a velvet side like the interior of the case, and a satin side, on which the rosin sticks less. My violin case blanket is attached to the case like the one below, so the user uses it as the case maker intended. It is made so that the velvet side (dark blue) is on top and the satin side (light blue) is against the violin strings. The rosin sticks less on the satin side, which is why it’s directed towards the strings.

The blanket is there so that the bows don’t damage the violin, or the violin string adjusters don’t damage the loose bow hairs. You can put it whichever way and it will do the job, but it will be more cleanlier if you put the blanket so that the rosin on the strings will stick to it the least. Also, putting the velvet side against the strings will take out the rosin from the strings and make you apply more rosin to the bow... which ends on the blanket and making the whole thing messier. (Now, if you are unlucky and the satin side is lower quality, more “plastic-ish” and you are afraid it may scratch the violin, nothing prevents you from putting the velvet side against the violin anyway.)

You may argue the bow(s) have more rosin on themselves, but the blanket will be pressed against the strings, not against the bows. I never had problems of rosin going from the bow to the blanket, except if I applied too much of it on the bows, and then you can just wipe out the excess rosin off the blanket ; it does not stick to it as it was not pressed on that side. 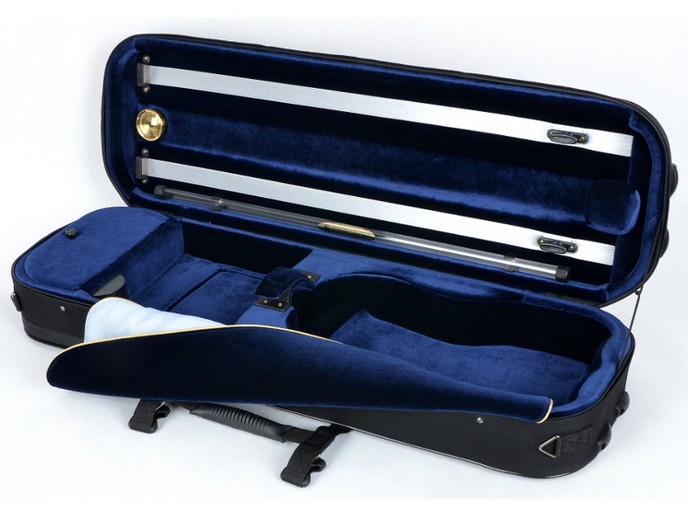 I have a large soft duster which I use to clean the rosin off the violin and the strings. I fold this up into a long rectangle and place it over the violin strings. I then take the violin blanket, which came with the case, and place that soft side down over the duster.

The point of these measures is to protect the top of the violin, the bridge, strings and varnish from the two bows which, in my case, are held in the bow holders in the top of my violin case. Now, each one is held by a loop and a peg which turns through 180 degrees to secure them, but in the unlikely event that a bow came loose and started rattling round inside the case I want to try and minimize any damage to the top of the violin. The top of the violin is more sensitive than the bows so gets the soft side plus the extra padding of the duster.

Not the answer you're looking for? Browse other questions tagged violin maintenance or ask your own question.

4
Are there limits for the possible pieces for different violins?
4
How should I clean my fingerboard without damaging my violin?
7
Learning my first instrument
4
What are some things I should know before building a homemade violin?
5
Violin - Best way to treat rosin build up on the strings?
8
Is Violin Outfit safe in a Airplane Cargo
1
Washing a soft (flute) case and removing mould
4
What are the direct consequences of exposing an acoustic piano to environment hazard?
20
Why is violin tuning order the way it is?
3
Which violin string gets played the most?