I'm looking for specific best practices around hand position and motion while using a thumbpick on an acoustic guitar. I haven't found any specific resources on this. I have been impressed with Troy Grady's Cracking the Code course on pick positioning and motion, and want a similar understanding for thumb picking. Here's my current understanding:

Wrist should be rotated clockwise, towards the guitar, so that the palm is angled slightly upward.

Thumb should be straight and angled approximately -20 degrees, depending on the note (if 0 degrees is a horizontal line parallel to the neck of the guitar. Another way of phrasing this is that the angle between the thumb and the neck should be about 20 degrees.

Here's a picture of Mark Knopfler, and the corresponding video. 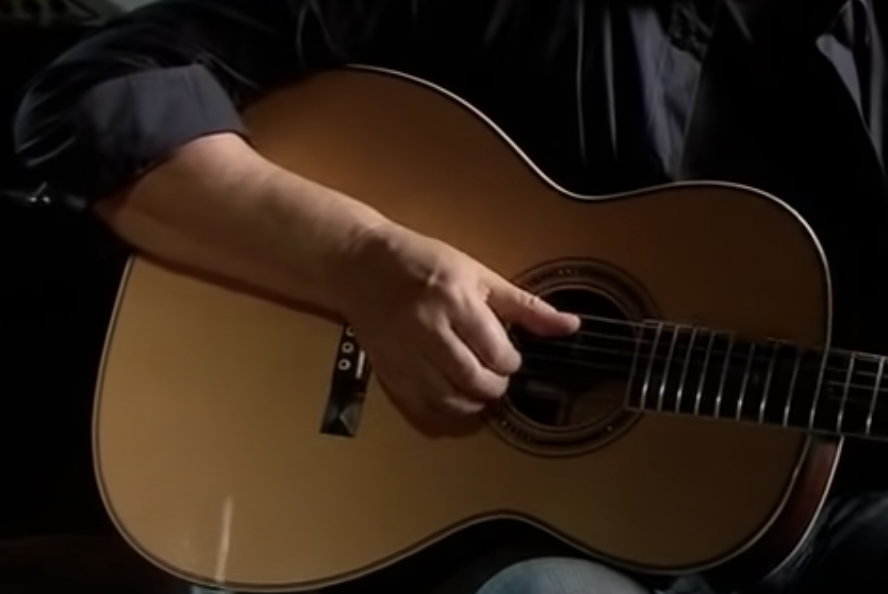 The thumb moves at an angle down and also away from the guitar. How much of the angle of attack is down and how much is away? The thumb remains straight.

The wrist rotation plays a role here as well. The more the wrist is rotated towards the guitar, the more the thumb needs to move away from the strings to escape the strings. ScottTsai has a great video on fingerstyle technique in which he explains that the wrist rotates towards the guitar as the thumb attacks in order to give a better sound. But I wonder if that's the most common wrist rotation. Wrist rotation away from the guitar would make thumb attack more of a downward motion rather than a combination of downward and away.

The thumb pick has a downward slant, and the middle to trailing edge of the pick strikes the string.

The fingers have an angle of attack that's upward and away from the guitar, but not angled as away as the thumb is. ScottTsai says he noticed that Tommy Emmanuel strikes the strings with the inner side of the fingertips (the side closest to the thumb), not the tips. He also says that the fingers should remain in a fist as much as possible for more efficient movement.

See Tommmy Emmanuel for an example as well.

While I'm certain that there are many guitarists who will advocate for specific position and motion as "correct", I believe there's no single right answer. It depends on what you're playing and how you want it to sound, and many other factors. Pick angle and right hand motion have immense effects on the tone produced, so method A is correct for tone A and method B is correct for tone B (though I'd argue even that's debatable). Studying video of the masters is a great and worthwhile endeavor, but in my experience, that's just a way to find different things you can try and see what works best for you. I've been watching video of Jimmy Page for decades and I still don't sound like him :)

Not the answer you're looking for? Browse other questions tagged guitar fingerstyle-guitar picking or ask your own question.

6
Flatpicking: how can I make my floating-pick-hand less bouncy?
4
Stopping high E string from muting by palm when using thumb to frett
1
Fingerstyle guitar - thumb fretting
8
Left hand position for high fretting (electric guitar)
7
How to train for faster picking speed on guitar?
3
Concerning individual string picking - when (it what situations) should the pick be angled, and when should it be perpendicular to the string?
0
Major scale picking
1
Muscle Contraction and Numbness on Fretting Hand During Guitar Exercise
6
How do I get a nice attack while fingerpicking?
4
Fender Strat tremolo arm at an odd angle