Ask Question
Asked 5 months ago
Active 5 months ago
Viewed 90 times
0
This question already has answers here:
How to interpret this two voice timing? It looks like there are only three notes in 4/4 measure (2 answers)
Closed 5 months ago.

I am studying Variation 18 from a Rhapsody of a Theme of Paganini. I have stumbled uppon a confusing set of notes. I see this comming back in the measures. In the first picture below you start, for the right hand with, AD. This is surrounded with a green square. This chord has 2 a length of 2 whole notes. Then shortly after, the measure says that I need to hit the A again. This is surrounded by a red square. I find this confusing. If I would hit the A for a second time it would contradict with the length of the chord AC. Something similar also happens in the second image. Could anyone please explain how I should play those notes for the right hand? 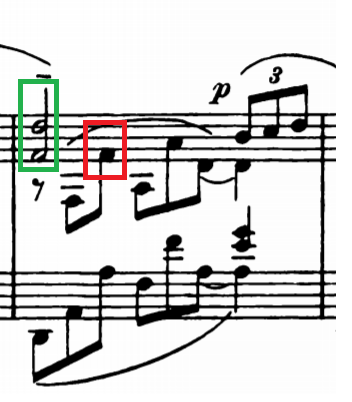 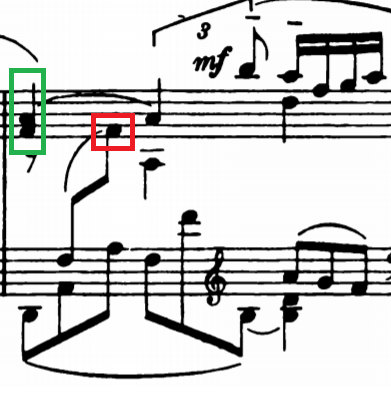 You have made a couple of errors here I'm afraid.

You have misnamed a few of the notes. The right hand part is in the treble clef at this point I think and, if I remember correctly, its in D flat major so there is a key signature of 5 flats. Also you have referred to something as a "whole note", which means something else in music.

Now to your counting issue: there are mutiple voices (i.e. parts) at work here and they need to be viewed seperately.

The first chord in the right hand (f and d flat) lasts for two crotchets (UK) or quarter notes (US). Anyway that is followed by the triplet (B flat,C,D flat) making a third crotchet all adding up to three crotchets.

The second example should now be a bit more obvious I hope. By the way I'm pretty sure that right hand part is in treble clef so the first notes are F and A flat. And yes you do play the F again because its in the other voice part.

Apart from - don't play the notes you named!

It's in 3/4, but could have been called 9/8, as there are plenty of triplets around. Looking at the stem direction, it's written in two parts for the r.h. and sort of two parts (missing rests) for l.h.

As such, the top part r.h. has a minim, followed by a crotchet's worth of triplet quavers. That adds up. Stems down - triplet quaver rest, then two triplets, and yes, that F does get played again. There isn't a simpler way to write what he wanted, and it's nowhere near unusual to see 'impossible to play' notes like this.

Pedalling is often at the discretion of the player, and here, I'd probably pedal the whole bar, or at least the first two-thirds.That way, there's no need to hold down the top D♭.

Not the answer you're looking for? Browse other questions tagged piano chords technique composition or ask your own question.

4
How to interpret this two voice timing? It looks like there are only three notes in 4/4 measure

3
Is there a formal name for this type of composition?
10
In piano music notation how are notes distributed between the staves?
3
How to play a note while the same note is being held?
5
Rhythm question about piano sheet notation
0
Dividing Note Value
0
Can bagatelles be in Sonata Form?
7
Beginner question about how to understand chords in musical notation
0
Where to cut off a sonata theme for Theme and Variations?
4
Question on rhythmic interpretation of Chopin's Prelude Op 28 No 1 : Performance differs from score?
2
Piano CPE Bach - Solfegietto - cross-hand playing style?