Block chord progressions on piano: how to improve landing fingers accurately and timely one after another

I dread block chords (just beginning to learn piano). They are much trickier than broken chords, as they require placing multiple fingers on respective correct keys all at once and land on the next chord on time. I would pause a lot during unfamiliar or frequent chord changes, and get mixed up (both in memorizing and in finger placement) when a repeating set of treble clef notes have slightly different chords (often differing just by one key) in different parts of a piece.

Here is an example: 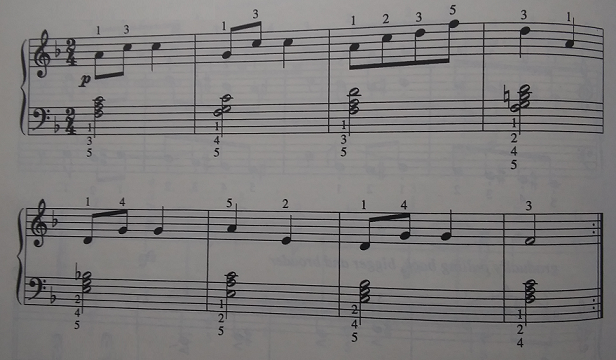 Aside from skills in sight reading and knowledge about chord progression theory, what are some of the practical and effective ways to improve in this regard?

First pay attention to the notes which are common or held between chord... 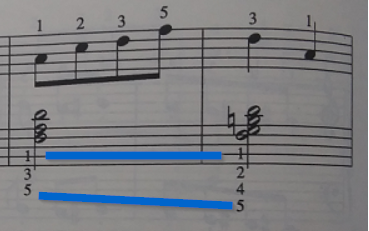 ...ideally you don't want to change fingers on those tones unless a change of position is necessary. So, instead of thinking it's three finger placements in the first chord followed by four finger placements in the second chord, think of the first chord as three fingers placed and then finger 3 splits to fingers 2 and 4, and those movements are only by step so the fingers simple strike the adjacent keys.

If those small movements of shifting the fingers around by step is difficult, I think you might want to spend some time on 5-finger, independence drills. It seems like your fingers may not all be equally coordinated. It should be easy to find many method books with 5-finger drills.

A related exercise you could try is something like this...

Don't overdo that kind of exercise. It may bother your hand. The point is to train each finger to move without the other fingers moving uncontrollably. You can also find a lot of things like this in method books.

Finally, I think a great way to train the hands to automatically hit the chord changes is to play the change and then repeat at various octaves...

...I've practices like that using a "gravity drop" movement where you lift you hands fully off the keyboard (which of course you will need to do to move a full octave) and then let your hands fall onto the keys with just the force of gravity.

Part of the point of gravity drop is economy of movement. Let gravity provide the power into the keys. But to do it right you must hold the hand and wrist with some firmness so the momentum moves through your arms, wrist, and hands. The benefit for block chords is you must get your hand into the correct fingering position before you drop it onto the keyboard. The challenge is to "lock into" the chord position with a lot more spatial sense when you aren't even in contact with the keyboard. Also, a fair amount of "visualizing" when you intend to drop your hands helps.

...much trickier than broken chords, as they require placing multiple fingers on respective correct keys all at once

To some degree you can think of many piano fingerings and basic musical elements as both simultaneous and broken notes. While not about your specific question regarding chords, this method books teaches scales as simultaneous finger groups which then are played disjunctly for scales. 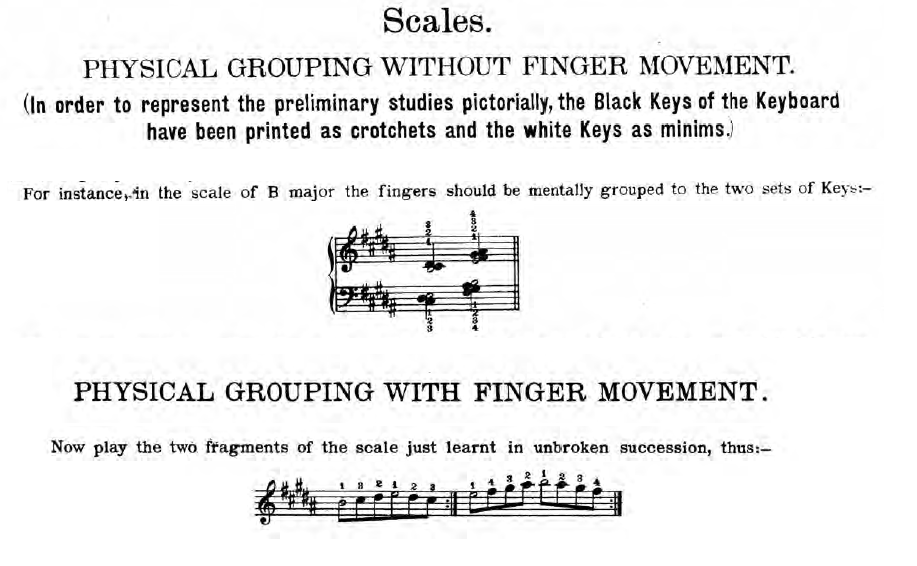 ...that image is a bit of cut & pasting from Knott, Scale and Arpeggio Manual.

Again, that isn't directly about your chord question, but you noticed the difference in playing chord notes broken versus simultaneously. Perhaps if you think about scale as both blocks of notes and disjunct, it might help you get the feel for playing chords as both simultanous notes and broken... as simply different rhythmic articulations of the same fingerings!

From what I could read in your explanation, I think the first important thing to do is to slow down the tempo, so that you can perform all the changes in the metrum.

Practice in sequences (e.g. every change is one sequence). Sometimes this is a tedious task, but think as if this is the whole piece and if you wanted to make music with it.

When actually practising, it can happen that you get confused. Here is one method that always helps me in such "narrow changes". Play the first chord in the octave it's written in and the second chord one octave higher. Repeat that. Even if it might seem even more confusing to you, it will give you the right feeling of how to put the fingers, because in the higher octave, it's kind of a new start for the hand. A second effect of this method is that it'll be easier for you to play all the notes at the same time and that the chord doesn't sound tottery. Once that works, you can play it again in the same octave and you'll see how it will be much easier.

Apart of a) difficulties with sight reading and learning to understand the chords by analyzing the triads, intervals and progression beginners always have b) sensomotoric problems with the coordination of the body, arms, elbow, hand, wrist and fingers.

Some ideas for practice:

Train this practice in combination of the notated chords, imagining the chord patterns, both, the notation and the pattern on the keyboard! Some teachers and students think it is a bad habit to look down to the hands, fingers and keys. Avoiding it might be a good goal but for a beginner it is necessary to control what he is doing.

And this is only possible when he feels the touch of the keys and sees the picture of the keyboard and the chords inside of his head. And this imagination you can practice like the scales, melody, chords also without the piano by memorizing a new piece.

Finally an advice to practice the adaptation to the keyboard keys before reading and training particular chords to become a unit with the piano grown together like a baby adapting the drinking reflex to the mothers breast: Lay your hands and fingers relaxed on the keys, play any chords or triads, (135, 125, 145, ... ) with any fingerings, also clusters (12345) by pushing your wrist up and away from the giving the impulse to the fingers like you were playing Tchaikovsky's concerto in b minor out of tune and out of key.

The goal of this practice is to adapt your hand and fingers to the piano keys like described above.

Usethe Arm Movement for chords. Use one finger as the pivot and release the rest of the finger on the notes. If you insist on the same chords, the muscle memory will guide you to the correct keys. Be patient and keep repeating the same chord before going to the next.

Realising that block chords are just broken chords re-joined will help. Look at your broken chords, usually done in triads, occasionally in fours. The triad version uses a pattern of root (1st 3), 1st inversion (2nd 3) and 2nd inversion (3rd 3). Play those as chords, moving up and down as you would with broken chords. You'll see that each new set leaves the lowest note and gains a higher one on the way up, and vice versa.

Do this for keys you are likely to play in initially, and soon start to include the seventh chords into the regime - start with dominant sevenths. Look at how the shape of each chord's dots are on the music. Root will always be three consecutive lines or spaces. The pattern for triads is always the same on the stave, no matter what key they're in.

After a while, you'll start to see a 'shape' and be able to play the notes straight away. It's like reading long words - we recognise their shape rather than sounding out their phonemes.

Another plan is to get to know which chords are likely to be coming up in a particular key. That way, you can ignore several 'options', as they were never options anyway.

Not the answer you're looking for? Browse other questions tagged piano chords technique chord-progressions or ask your own question.

6
Rules of how the bass should (and should not) move in chord progressions
2
How can I find a chord to go to after any other chord played on the piano?
2
How to figure out piano chord progressions while playing?
6
How to tell when chords are separate entities and not part of one prevailing chord?
2
Pivot chord but different scale. ( Ex. G; C and C; C ) is it possible to use them as a pivot chord to one another?
4
How are the piano keyboard and performer fingers lit in Synthesia cover videos?
1
Question on piano technique for fast, light and loose runs: How much fingers and how much elbow?
1
On piano how do I play one note, and the same note an octave higher with one hand?