Edit. I think the OP's primary source of confusion was caused by not realizing that individual "melody" notes affect the perceived harmonic situation just as well as notes played simultaneously as chords, and that the ear's harmony tracking considers actually heard and imagined pitches over a longer time window than just individual note pairs. The note sequence C - Eb (or "D#") - G - C outlines a C minor triad, and G - E - C - G outlines a C major triad, and they sound different just like the chords sound different. The ordering of the notes and the directions of the intervals doesn't matter.

The reason why the note sequences sound different is that the notes' relationships to the perceived harmonic center, the tonic, are different. The tonic is a pitch that your "ear" (brain) figures out, and what you feel to be the tonic is somewhat subjective and depends on when you start hearing the music, what you heard prior to that and how you perceive the rhythmic pulse of the music. Where is the strong beat, the "one" as in "one-two-three-four one-two-three-four", and where the notes you hear sit compared to that strong/weak pulse.

In addition to a central home pitch (note), your brain tries to figure out the expected harmony around the home note. This means, if your tonic is C, the home harmony can be either C minor or C major. This is called the key of the melody - where is home and what does it feel like when you're at home.

In your example sequence, the first triad C - Eb - G is played so that it very clearly establishes C as the tonic, and by the time you hear the major triad G - E - C, your perception is already biased. Pairwise note-note intervals are not as important as each note's relationship to the tonic pitch, so even though in the second part you have a minor third G - E, you don't perceive it as the minor third of E minor. Because C is the tonic, you look at the G - E jump in that context. You always "hear" your expected tonic even when it isn't really sounding.

Let's take a few examples which demonstrate the phenomenon by playing note sequences over a basic drum beat, which makes the strong beats very explicit.

In this sequence, the C note is on the "one", the strongest beat, and the E note is on a strong beat as well. The D and F notes are perceived as more like passing notes or bystanders, and the tonic is C major. Or maybe F major ... it's somewhat subjective, and it's possible to imagine F being the tonic here. But D and E cannot be the tonic IMO, I can't stretch my imagination that far.

In the second example the repeating note sequence is exactly the same, but roles of C+E and D+F are reversed. Now the D and F notes are perceived as setting the tonic more strongly, and C and E are the bystanders. I'd say this is in D minor! All the same notes in the same order as in the C major example, just on different beats.

This example is a variation of the OP's note sequence, but with the initial minor triad moved to F. The beginning sets the tonic to F minor, and the C major triad G - E - C after it sounds ... dark? (I don't want to say sad, because it would give a pretext for someone to say that a song in a minor key can be happy and a major key can be sad and it's a cultural convention etc.)

The C major, in an F minor context is fifth-degree major chord, the "V chord" or dominant chord. After the C major, you want to hear an F minor again, to feel at home.

Now the beginning sets the tonic to F major, and so the C major triad G - E - C in the end sounds brighter, doesn't it?

If before example 5 you had been listening to something that has C as the tonic, you might hear the starting G - E interval as belonging to a C major chord. But then in the end of this phrase, there is a strong B - E, which very heavily sets the tonic to E, and resets your perspective. Listen to the example again - now you perceive the G and E notes differently, because the tonic bias in your has been set by the B - E ending you heard previously.

The C in the end, and how it's played as a final note sets the tonic to C. And again I would say that it even gives perspective to the preceding G and E notes.

Now, directly after listening to example 6, listen to example 5 again.

Human perception in general doesn't only detect differences, but the direction of those differences.

If someone pumps more air into a balloon so that it becomes twice as big, you don't think "I can tell that the size has changed by a factor of two, but I can't tell if it has got bigger or smaller" - you can actually tell that the balloon is now bigger!

If a helicopter climbs 200 metres, that doesn't look to us the same as if it were to descend 200 metres. Our senses don't only perceive the amount of change, but also the direction.

Another thing to bear in mind is that the human ear tends to hear notes in chords (and arpeggiated chords, like your melodies) with respect to a root. As you say, what our impression of the root is partly to do with harmonics - if we hear a bunch of notes that between seem to have a lot of harmonics in common with one particular note, that note may be perceived as the root (though there are other factors that affect the perception of what the root is).

If you are perceiving your minor triad melody as darker, it's probably because you are hearing C as the root of the arpeggiated chords that constitute your melodies - and the intervals from C are not the same. C to D# (or Eb) is not the same as C to E.

This is the linked source... 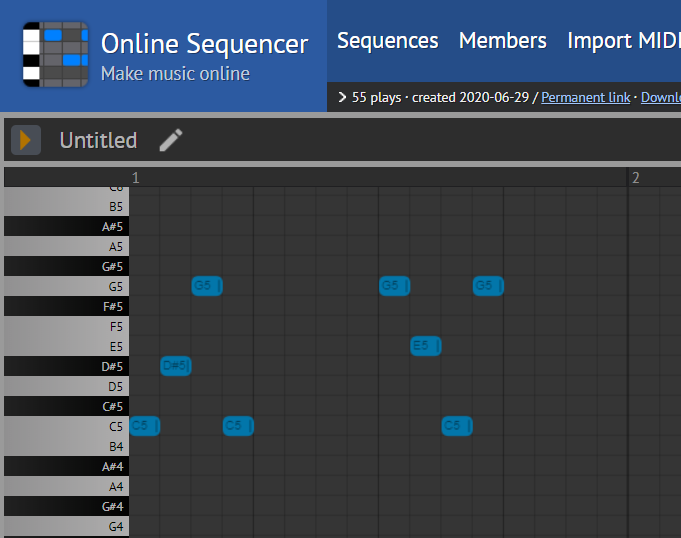 Let's treat the D#5 as Eb5 so we can properly call it a third.

You are overlooking both the direction of the interval (ascending or descending) and the relationship of tones to chord roots.

C5 to Eb5 and G5 to E♮5 are indeed both minor thirds, but their directions and ending tones differ.

The practical thing you need to know is (tertian) chord qualities are determined by the intervals above a chord root. Even when the chord is inverted the chord quality is determined as if the tones are theoretically placed above the root in a stack of thirds.

With your two chords, both have the same root: C.

The chord intervals by the theoretical stack of thirds above the roots are:

They sound different because, guess what, they’re different. Simple as this. But there’s a broad spectrum of differences, parameters of differences and how they function within a context. For example, there’s also a difference between C Major and F Major triads and still they’re both major and discernible chords.

But, as anything related to analysis, you’ll need always a context. In contexts where set classes (and not chords) are the elements of structural coherence, F Major, C Major and Gb minor triads will be the same (actually, different sets or instances of the set class 3-11 or (037)). But in contexts where chords are these elements, like harmony from common practice or smaller harmonic environments, each of these triads will be and function differently.

Not the answer you're looking for? Browse other questions tagged chords harmony intervals melody or ask your own question.

4
Theory of Major and Minor Chord Sounds
14
C major 6th chord and A minor 7th chord: same notes but different quality, why?
7
Are intervals like major 3rd, minor 3rd, and major 2nd all based on the scales, or are they based on how many semitones they have?
5
The sudden switch from C major to C minor in Wake me up when September ends and a Solo Acoustic version
1
Why do I hear a major key lament bass in Bach's Chaconne in D minor?
3
Why harmonize non-diatonic notes with major 3rds above, in a "minor key" context?
1
Why is the tonic so important for melodies?