What are the practical uses, what are the techniques that can be invented, for a pitch bender on a combo organ?

Look at this pedal's effects. I'm getting it to use with a combo organ; its delays, rotary simulator, chorus, drive, ring modulator, and reverbs are certainly all useful for an organ, as well as the wah. PDL Pitch mode, however, perplexes me. It looks like there are possibilities to be had with this: 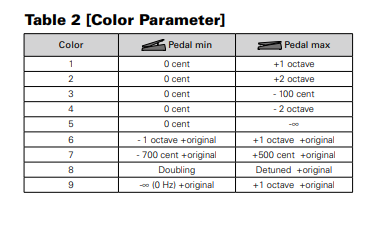 But I wouldn't know how to explore them. I could only imagine 5 being usable as a toy sound effect, as if the song is shutting down, and 8 seems better done by just activating the chorus on my organ, just a way to color the timbre. But for the other seven, what are some practical organ techniques that can be created, given the descriptions above? This is not a digital piano; dynamics are controlled by an expression pedal and notes sustain indefinitely. This is not a synth of single or limited polyphony; I would like to make full use of two hands.

As mentioned in leftaroundabout's answer, this seems to be replicating some of the pitch shift effects popularized by the Digitech Whammy (see the Effects section in the Whammy manual here).

Here is a great article on the Guitar Gear Finder website which lists some of the best known songs which use the Whammy, and how to replicate them. Although this article is focused on the guitar, there is no reason why these pitch shift type effects cannot be used on other instruments.

One other thing to note, the latest versions of the Whammy are polyphonic. I can't see if the pedal you refer to supports polyphonic pitch shifting or not.

This seems to be inspired by guitar pitch-shift pedals, the best known being the DigiTech Whammy. Those, in turn, were mostly a means of augmenting the mechanical pitch bend abilities that an electric guitar has (both the “whammy” vibrato arm and direct finger-bending of strings). The digital implementation has both larger range and avoids detuning problems, but guitarists still tend to use it kind of similar and mostly for singlenote playing. E.g. Dimebag Darrel is well known for his Whammy pedal work.

As for organ – well, this would then probably most useful for guitar-like solos in a rock context. Pitch-shifts can also be applied to full chords, but that gets you in even more exotic strange-sound territory. There's one classic recording I can think of that has a full and big organ pitch slide:

(Not sure how they did this, I don't think this is actually possible on a Hammond. It's probably a recording trick: if the tape was slowed down during recording, you get the opposite of the better known tape-stop pitch drop, i.e. a pitch rise.)

For other styles of music and especially if you accompany yourself... no, I daresay pitch bend is far too intrusive then.

As a special effect, some Hammond performers like Keith Emerson used to briefly turn off the tone-wheel motor during a solo. When they did this any held chord plunged down to 0 Hz as the tone-wheels stopped. Then when the motor restarted the held chord swooped back up from 0 Hz to audible again.

I think your pedal is trying to emulate the behaviour of turning the tone-wheel motor on and off.

Not the answer you're looking for? Browse other questions tagged keyboard effects-pedal organ or ask your own question.

11
What is distinctive about the Hammond B3 organ?
1
What are some solid techniques for playing the piano quickly (fast tempo)?
10
Are instructions on organ stop settings included in the notation of Baroque organ music?
11
What is the reason for the many manuals on a pipe organ?
1
What playing techniques are sensitive to “jamming fingers”
21
What are the practical advantages of keyboards with non-weighted keys vs. weighted hammer action?
1
What was the purpose of Jean Adam Guilain's Organ Suites?
2
Are there keyboards that you can import sounds into for each key?
5
What type of bass clef is used for the organ pedal?
3
Can a stustain pedal be modified for alternative uses?