Why is a major key called major?

We are aware that the major scale or key is the sort of datum point for a lot of theory. But why the word major? That very same word is used to describe intervals, but there's no correlation. Or is there? Major there means larger (minor meaning smaller in comparison), but a major scale is no bigger or smaller than a minor scale.

The tonic, supertonic, subdominant and dominant tones are the same in both major and minor. Both will use a leading tone. So, those four tones don't distinguish major versus minor scales.

The sixth and seventh scales degrees vary in minor so there is some overlap with major. You could say the whole upper tetrachord is not a definitive way to distinguish major and minor, because of the variable tones in minor.

This is my personal take on the quote @AlbrechtHugli gave from Bach: ...tertiam majorem (doremi) and tertiam minorem (remifa)... Bach only gave the beginning third to distinguish the scales, because that's all that's needed to get to the definitive mediant.

but a major scale is no bigger or smaller than a minor scale.

True, but it's about the size of their mediant thirds.

That very same word is used to describe intervals, but there's no correlation. Or is there?

There is. Or so I always thought.

The mediant (3rd note in a scale) is a major third above the tonic (1st note) in a major scale and a minor third above in a minor scale.

The three primary chords (tonic, dominant, subdominant) I IV V in a major scale are major chords = major (big) triads. ("big" referring to the lower third do-mi, fa-la, so-ti, these main triads are built by a major (lower third) and a minor third (upper third) and with other words by a major third and a perfect fifth ( measured from the root tone!)

Analogously the triads of the i iv v degrees of the minor scales (and minor modes) are built of a minor (small) third and a perfect fifth - unless we have a harmonic scale (or a rising melodic minor scale) where the triad is a dominant chord.

Bach didn't name in the title page of the WTC the keys as major or minor!

He wrote tertiam majorem (doremi) and tertiam minorem (remifa), contrasting the Ionian and Dorian mode and not Aeolian as relative key. 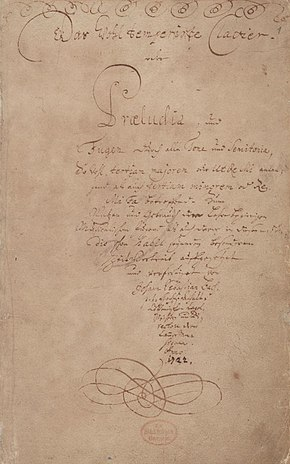 I was immediately drawn to similar comparisons from latin, stars & star systems are referred to as major & minor, tarot cards have a major & minor arcana… & thought there might be some commonality as to why the parallels were drawn, that some things are considered greater or lesser than others…

I found this on etymology online - emphasis mine

major (adj.)
c. 1300, majour, "greater, more important or effective, leading, principal," from Latin maior (earlier *magios), irregular comparative of magnus "large, great" (from PIE root *meg- "great"). From 1590s as "greater in quantity, number, or extent." Used in music (of modes, scales, or chords) since 1690s, on notion of an interval a half-tone "greater" than the minor; of modern modes, "characterized by the use of major tonality throughout,"

So there you go. That's how it's derived, it is as anticipated, "greater than" & "lesser than"

8
How to determine what key changes are appropriate?
36
B flat minor - the key of death … seriously?
8
Why is the key signature not the same as the listed key?
9
Why is 'C minor' parallel to 'E♭ major', but not to 'D♯ major'?
2
How to discern the key/tonic when they are key changes in song
0
Being limited to the natural minor/major, relative minor/major and parallel key
9
When we play the C mixolydian mode, are we still in the key of C?
4
Minor Key (and other key?) Roman Numeral Analysis
6
Can the key of a song be only major or natural minor scale?