Is it correct to refer to a third/fifth/etc even if they're on black keys?

To demonstrate this, let's observe a C major chord (interval 0-4-7):

Because a major chord always has the interval 0-4-7, the 'fifth' (note with interval 7 relative to root) is on a black key.

This is not correct. The interval distance is determined by the letter name distance which is the number of letters you encounter between the two notes which is very easy to see on a staff. This loops if you go to an octave or above. An example on C would be:

On the staff it looks like this for C:

Don't let the keyboard layout fool you into false premises!

Use the guitar and it should become clear that what you start from in your question is dubious. On guitar there are no 'black' or 'white' notes (keys on piano). And you are probably aware that when you play , say, C E G somewhere, by moving everything up one fret, you get C♯ E♯ G♯. Up to wherever, use the same shape, and you always have a major triad - on whichever strings you choose. And - that F isn't in the triad - it gets called E♯. Honest!

Using the white keys on piano to ascertain intervals isn't always the best approach, as you may now be aware! However, if you insist, then simply count the number of smallest steps (semitones, or each guitar fret) for half the answer. The other half will be revealed once you've established what the lower and upper notes are called. And simply playing them cold, and listening to them aint gonna work! They need to be written down, in a specific key, on a stave. Otherwise they could have any of two or more different names, depending on situation and their own names.

Yes, the black keys work in their own right, just as the white keys do, although they usually have ♯ or ♭ in their names. And when you consider that F is enhamonic with E♯, why shouldn't they? Any black key can be part of any interval, including 3rds and 5ths (and everything else) Yes!

Yes. The intervals are always relative to the root. There are some interesting cases where there are two possible names for the same interval depending on how the note is named (even though it's the same note). So, for example, with the root C you would call Gb the diminished fifth. The same note spelled F# would be an augmented fourth. Changing the root to C# you get a diminished fifth is G but the augmented fourth will be called F## (and now you know why there are double-sharp and double-flat spellings for notes).

"As I understand it, the terms "third", "fifth", "seventh", etc. all refer to the n-th white key relative to the root note."

Not quite They refer to the n-th LETTER NAME relative to the lower note.

it's all about spelling. And spelling is all about what the interval DOES. In isolation, is the interval from that white note near the piano keyhole to the next-but-two black one C to F♯ or C to G♭? Or even B♯ to E double-sharp (OK, unlikely, that one!) Until the interval has context, until it DOES something, we have no way of knowing.

Interval naming and sizes aren't specific to an instrument. "...white key relative..." how would that work for non-keyboard instruments? Basically, the intervals are named by the letters and the specific quality comes from the number of half steps between the tones.

You're on the right track with 0-4-7. Those are the interval sizes in half-steps. But that isn't enough to get the interval names. You need to spell it with letters. That part - the spelling with letters - is important and it leads to a mistake in your example.

C# F G# is sized in half steps as 0-4-7, but the intervals are not a third and a fifth, not with the spelling you give. C to F is a fourth of some quality. A perfect fourth would be 5 half steps, but in this case the sharp on C makes the interval one half step smaller, it becomes diminished, so it's a diminished fourth.

If you want to take C E G - interval above root of major third and perfect fifth - and raise it a half step and keep the same interval naming, you spell it C# E# G#. Starting with root C# any third above it must be letter E, accidentals are next applied to size it to the specific kind of third: E# for a major third, E for a minor third, Eb for a diminished third, etc.

Your use of the white key on keyboard effectively serves the purpose of providing letters, but I think it leads to confusion with enharmonic spellings like E# versus F natural... 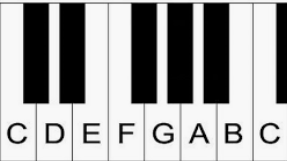 ...that image in truth is wrong. The key labeled F can be F or E# or Gbb, etc. etc. Drop the method of keyboard reference and get comfortable with just reciting the gamut of letters. For practical purposes you want to be able to recite by thirds and fifths in ascending and descending order.

...then just keep track of any accidentals applied and the corresponding changes in interval quality.

Not the answer you're looking for? Browse other questions tagged theory chord-theory terminology intervals or ask your own question.

4
Why is the 2nd note of a chord called major third?
3
Can I say all black keys are enharmonic equivalents?
2
Does melody note function change with each chord change in a certain harmonic field?
6
Confused about intervals and keys, does the former depends on the latter?
1
Why do 7 chords use minor 7th while 6 chords use major 6ths?
19
Exactly what does "diatonic" mean?
0
What is the relationship between the 5th and minor 7th in dominant chords?
9
Black keys - what scale are these, how to use them?