Comments about roots never being omitted in another question How to distinguish between a minor triad and a maj7 chord with same notes but without the root prompted this one.

This question Why rootless chords? only partly covers the question. It only considers a bass part supplying the root.

It seems to me for practical purposes "rootless" chords are voicings for accompaniment chords where either a bass supplies the roots, or a treble instrument ends up hitting the root in the course of improvising. A pianist could supply all three parts.

To what extent will roots actual get played somehow even if they aren't in the "rootless" accompaniment chords?

A lot of responses are saying things amounting to "roots aren't played all the time", or even "the root is absent (from all instruments) more often than not."

I though my wording "to what extent" was clear enough to show I'm looking for a rough description of what's normal in styles using rootless chords (not Dixieland, not free jazz, etc.)

From Alice in Wonderland 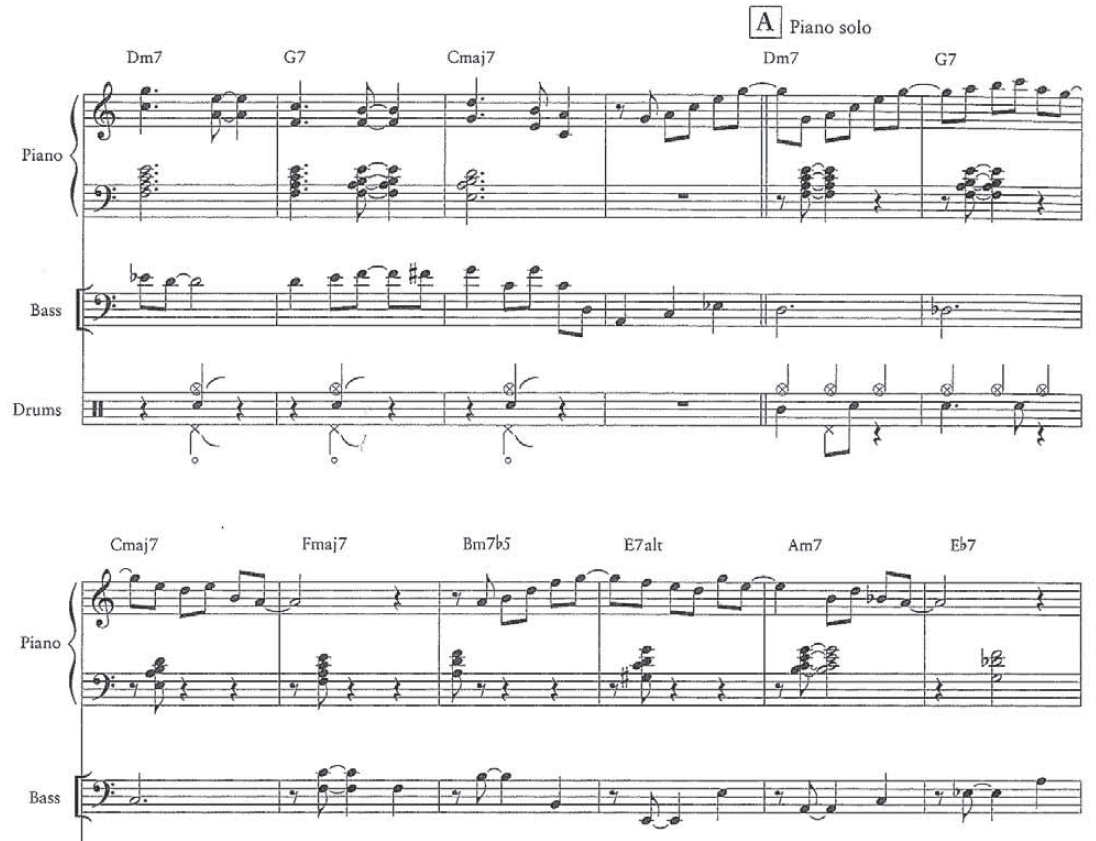 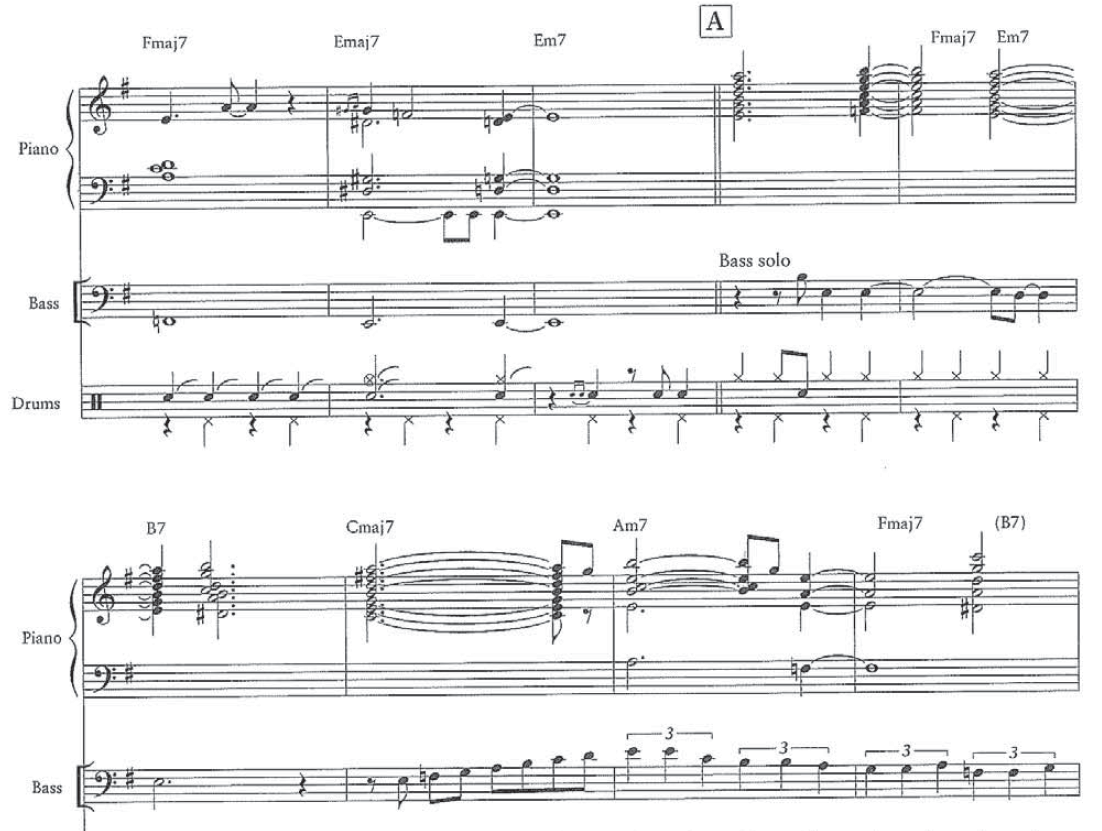 The dissertation containing the transcripts is about LaFaro's unique, groundbreaking bass style. The examples aren't cherry-picked. Most all the examples look like these. Roots for the labeled chords are in the piano or bass most of the time. Also, it seems roughly, when a chord doesn't have a root in either instrument the rootless chord contained between chord that do have roots - like the first G7 in the Alice in Wonderland example.

It isn't a question of black and white extremes or isolated passages. It a question of norms. Isn't this kind of harmony normal for "rootless" chords? Chords roots are play somewhere in the texture for a significant amount of the music.

"Rootless" is really a reference to a type of voicing, typically for the guitar or piano. "Rootless chord" is a misnomer. "Rootless voicing" or "rootless chord voicing" is the actual meaning.

First I’m not a fan of the term “rootless” when referring to jazz because regardless of whether it’s being played or not the root of the chord is very important to jazz players and is something they are aware of at all times. Pianists tend to not play roots on the bottom of their chords much because it can clash with the bass but they may include root notes in other parts of their voicings. Guitarists will sometimes voice with the root on the bottom, it depends on the style and preference of the player but it is in a higher register than the bass. As a bassist I prefer pianists and guitarists avoid playing roots in general, especially in the low register because it can sound cluttered against a walking bass line.

As for your final question: “To what extent will roots actual get played somehow even if they aren't in the "rootless" accompaniment chords?”

The answer is a fair amount but not all the time and mostly by the bassist, so about 25-50% of the time at most. It also depends somewhat on the style of jazz, the more modern, the less you will hear roots. When playing walking bass lines in 4/4 usually only one or two of the quarter notes in any given bar will be a root, most often on a downbeat to establish the foundation of the harmony. The rest of the time the bass creates lines using chord tones and passing notes to spell out the harmony in a logical linear fashion. If a soloist plays a root it is in the context of improvising a melodic line and doesn’t really feel like the root, more like part of a melody.

Here’s a little 4 bar example of piano and bass playing a simple I-VI7-IIm7-V7 in C. You’ll see that the only roots are in the bass and only the second bar has more than one root in it but it sounds surprisingly grounded.

It's important to clarify the role of rootless voicings. They are not limited to contexts where someone else in the band plays the root. Even in a solo piano concert, the pianist will frequently use rootless voicings--even when the root isn't being sustained as a bass note and even when the root doesn't appear in the right hand as part of the improvisation. In most small combo contexts, the root is absent (from all instruments) more often than not. There is no rule, expectation, or convention that the root be ever-present somewhere in the band.

In a small combo context, each instrument has a designated role. The bassist's job is to lay down the bass line, which establishes the roots. That's why it is generally considered poor form for pianists or guitarists to play the root in the lower range of their instrument. Doing so takes over the bassist's role, causing the pianist/guitarist to clash with (or override) the bassist's creative choices. This is part of the reason why rootless voicings are so popular--they provide an easy way to avoid stepping on the bassist's toes.

But just because the bassist establishes the bass line doesn't mean they will play the root most of the time--or even at all for a given chord. Paul Chambers and Scott LaFaro (among others) provide great examples of how to walk a bass line without ever playing the root. In some instances, a single chord may occur for multiple consecutive measures, in which case it may be unnecessary to play/sustain the root in every single measure.

But even in those cases where the bassist does play the root, it is usually only played on the first beat of the measure. And then on beats 2-4, any rootless voicing that the pianist/guitarist plays will occur without anyone else in the band supplying the root. This is perfectly fine, because the root has already been sufficiently established in the listener's ear.

So, it's very common that, while a rootless voicing is being played, no one else in the band is playing the root.

Maybe additions to the tags - of guitar and piano - would make the question more focussed.

On the proviso that the bassist will often (not always) provide roots - after all, in a lot of music, including jazz, that's almost a given, rootless chords are justified for guitarists and piano players.

I consider that at the very beginning of any piece, it's important to give the listener a feel of where 'home' is, so they know where they are, and the simple expedient for this is to play the tonic. That of course includes the root - otherwise we could be anywhere. Whether that's played on whatever instrument is academic, but could be on one, some or all.

After that, with bass playing root of some harmonies, and/or 3rds 5ths or extensions of them, the listener will have some guide to the geography of the piece, as a 3rd, for example, is directly a clue to whatever root it would have been. So, rootless for piano/guitar, and also rootless for bass. 7ths work similarly.

There is no need to keep putting roots in, although it does help to keep the listener in the loop. If it's a jazz classic, then the journey is possibly already known, so the listener may well put the missing roots in, in his inner ear.

As already stated, rootless chords are very useful as they keep players off each others paths. Roots, by definition, tend to be low notes, which when there are more than one, tend to muddy up quickly. Avoiding extra low notes therefor alleviates that situation.

Back to para. 3: not certain that something like Sweet Georgia Brown falls into this category!

It's common and trivial for a player to choose a voicing that doesn't include the root of the chord. Maybe another instrument will play the root, maybe not.

Look at this example. The first chord omits its root, the second one omits its 3rd. But if the composer tells us the underlying harmony is as marked, we mustn't argue! A fine example of chord symbols NOT being a complete description of the music. (I suppose we COULD have written 'C/G(omit root) and G7(omit 3rd). But why not let the notation do its job?) 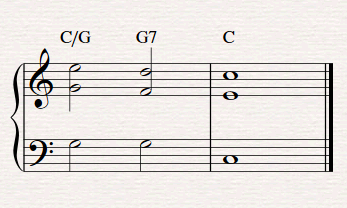 Then there's this sort of thing. Yes, a dim7 chord often acts as a dom7(b9) rooted a major 3rd under one of its notes. People who want to emphasise this function sometimes use a chord symbol like the one in red.

But beware of taking this idea too far. If you find yourself writing 'Cm13#11(omit root)(omit 7th)' (and we DO see this sort of thing) it's time to consider whether you're looking at the chord from a useful angle!

To give you a more metaphysical answer: If no musician play the root of a chord, it should be played in the heads of the listener. This is an extremely important part of playing jazz: To create a "player" in each listeners mind. This goes for melody, chords, rythm, structure. You should as a jazz player be able to create this "player" inside each listening mind.

In my opinion, this is what jazz is all about. This is what makes music swing, this is why a melodic twist turns out "interesting", or a rythmic cross-rythm feel enticing.

When that is said: The musicians need to "set up" the player in each listener, as the previous answers adress. They need to establish a tonal center, a basic rythm, basic chords and roots. And this is why a seasoned jazz fan actually experiences a lot more when hearing jazz than the inexperienced listener. Because they already got the "internal player" tuned up!

EDIT: I'd say that roots are generally played in jazz. The early forms of jazz used roots on the down beats, and later forms will play roots on up beats, off beat, possibly even being played in the bar prior to the chord, or the bar behind. I would also say, in the Bill Evans Trio case, that Scott LaFaro often used ambigous notes that may be interpreted as different roots in adjacent chords in the form. This was a part of the unique creation of Evans/LaFaro, in my opinion. LaFaro expanded the role of the bass due to the much more varied playing of the roots of chords, both in time and beat, and he also did this by frequently omitting the root altogether, because it was implied by the tradition and culture. In a way you could say that they brought the listener closer to the band by exploiting the "player" inside the head of the listener, thus making the listener actually becoming a player in the band. I know that this is highly subjective, but I feel that way about the Evans/LaFaro music.

Not the answer you're looking for? Browse other questions tagged harmony jazz or ask your own question.

13
Why rootless chords?
1
How to distinguish between a minor triad and a maj7 chord with same notes but without the root

54
Which notes are optional in jazz chords?
4
The melody+chords pattern in perspective
4
When playing solo piano how to play jazz chords with left hand when there is no bass player to play the roots?
13
Why rootless chords?
2
Walking bass for half-note chords?
2
Chord Succession vs. Chord Progression in Douglass Green's “Form in Tonal Music”
4
Do we hear bass/baritone solo melody lines as being implicitly “on top of” the accompaniment, for harmonic purposes
3
Is the melodic minor scale use as the basis of chord progressions in modern jazz?
2
chord voicing to improve overall sound
1
Writing characteristic chord progressions in inversion, & doubling notes other than the root