How do I know what patterns to play under a melody? 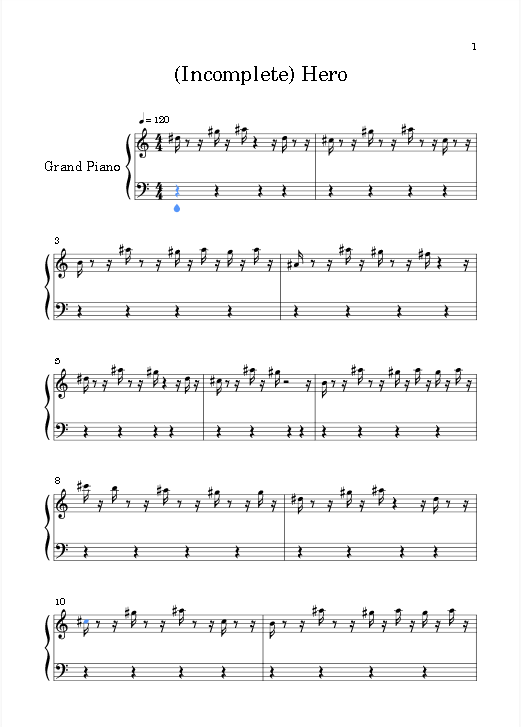 So I made a melody in my head and translated it to a keyboard. I'm not sure which key it's in but I think it's in D# minor. But I just CAN'T, for the life of me, add a bass to it... I really like this one and I'd love to not cast it aside with all the others. I did my research on arpeggios and stuff and some famous left-hand patterns but I still don't know. I'd like an algorithm that tells me a good pattern to play under any melody; at least as a placeholder till I find something better. How do I go about learning that? I'm really new to this so please bear with me.

This is where your musicianship skills become useful. (Or where you realise you need some!)

Write down the melody and show it to us as notation. Then we know what we're talking about.

Hint: You'll probably find it much easier to notate with an E♭ minor key signature.

I'm really not trying to belittle you. But if you want to work with music, LEARN THE LANGUAGE!

If I'm misjudging you, I look forward to seeing your melody!

OK. You've put some work in. I'll offer some too!

First thing I did was re-write your tune to make it more readable. All the notes still start at the same times, but it's easier to read with a key signature (yes, I'll buy E♭ minor) longer note values and without all those fiddly rests.

Then I transposed it down to A minor. Simply because it's an 'easier' key to think in. You can transpose it back up of course if you like.

Now, the harmony. Well, if it's in A minor, I guess Am might be a good first chord. Yes, that sounds OK.

Now, what's changed in the second bar? Basically the same melody, but A has moved to G. What's an Am chord become if the A moves to G? Yes, a C major chord. Try it out - yes that's pretty.

We're getting towards halfway in the first 4-bar phrase. Shall we try a bog-standard sub-dominant moving to a dominant? That's Dm and E7. Yes, I like that.

The next 4 bars are almost the same as the first 4, with a more elaborate ending. Exactly the same chords would be boring, let's try another cliche, a 1, 6, 2, 5 bassline. If we keep it diatonic, you'll see what we get. Maybe you like the Fmaj9 chord, maybe you don't. Just give it a chance to grow on you. It could alternatively be a C chord as before.

I've spiced the E7 up with the 'Hendrix' ♯9 plus a suspension. (Ok, I'll be honest. It fell under my fingers and sounded good. The analysis came afterwards.)

You've given me just 3 more bars. OK let's do the same as we started with, but get to the E7 a bit sooner, and I'll add an extra bar to round it off back home on Am. 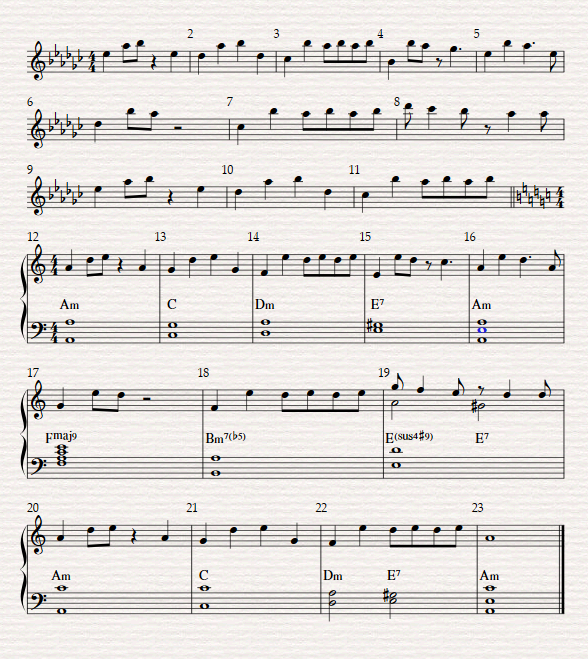 We could have done other things. We could have taken that A, G, F, E line from the melody and doubled it as the bass line. But that's not really adding any value.

Hope I've given you something to think about!

Here is one trick if you just want to lay down a series of chords under your melody.

Work out what key you are playing in, then write out all the triads (1st, 3rd, 5th) in that key. There should be seven of them, with one starting on each note of the scale.

Pick a group of notes to lay a chord under. This could be a bar, but doesn't have to be. Pick two important notes in that group (but try to avoid two notes that are a 2nd or 7th apart as that messes up this system). It's entirely a judgement call as to which are the important notes, but an example would be the two ends of a run of notes.

Find the chords that contain those two notes. There may well be two to choose from. Try playing each of the chords, and pick the one that sounds best.

For bonus points, use inversions of the chords to avoid the bass line leaping around too much. If you use a simple triad under the root note of your key, you can produce all the other chords as triads, first inversions or second inversions, barely moving up or down the scale at all.

This answer is assuming you meant the bass, but the same techniques apply to laying chords beneath your melody with any groove you want

This answer will probably amount to "Music theory is a useful tool in a musicians tool belt, so learn it to speed up your workflow, and to know what to do at certain situations," and while this is true, I don't think just telling you that would be a productive answer, especially because you may already know more than I do.

What I always do is create chords first, and then melody, and that way I can use the root of the chords as the bass and I can add groove later. Obviously, you created the melody first, and I think the next best step is to find out the chords beneath your melody before you figure out the bass.

So you should have the chords laid out under your melody now! Now if you know your theory, or how to use google well enough, you should be able to find the root of each chord. At this point, you can make your bass the root of each chord. Your bassline wont have any groove to it or anything, but you have a bass that is 100% technically correct and under most circumstances, won't sound bad.

At this point, you have completed your "algorithm" for bass, and the next step will bring you to more artistic choices.

Now the "groove". Just for clarity, I use the word groove VERY loosely here. By groove I mean the rhythm and note changes that the bass has in order to break up the root note. You said you have done research, and I would apply all of the techniques you have found online using the chords and bass we have come up with in the last step. If none of that works, you can always keep your groove simple, and just one note per chord, or you could have the groove match the rhythm of the melody. You have complete musical freedom so I wouldn't be afraid to try things until they work.

Now we have no clue what genre of music you are working on so I will spare you specific examples of grooves and artistic choices, but one thing that never fails is to listen to other pieces of music in the same genre and just take inspiration from what they do. Pay deep attention to detail when listening as well, because some of the most important things hide in the details.

Like I supposed in my comment it is the pattern descending from the root of the major scale: la so fa mi. Actually the bass line is integrated in the melody. If you cut the first note of each bar and let it play by the bass you have this line (in a minor A-G-F-E).

or you can play the triads of the progression d#, C#, B, A#. Both harmonizations will fit.

It is the most popular progression: 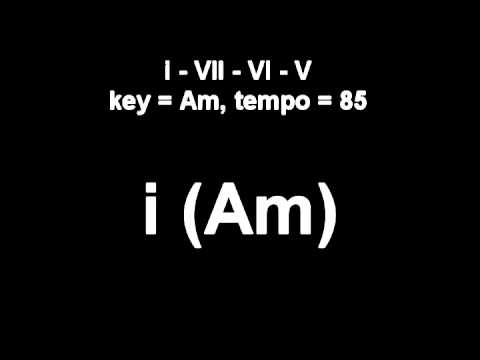 But I just CAN'T, for the life of me, add a bass to it... I really like this one and I'd love to not cast it aside with all the others. I did my research on arpeggios and stuff and some famous left-hand patterns but I still don't know. I'd like an algorithm that tells me a good pattern to play under any melody

Here is a list with about 200 songs using the same pattern. Listening to some of them you‘ll get some ideas for your research:

If you keep the primary triad you‘ll have (in a- minor):

(the dominant of am will be better than am/E.)

The notation in yor melody is unusual: after a 16th note we write first the 16th rest and then the eighth rest.

So you really must learn first the language - like Laurence says. The grammar of triads and the orthography of rhythm. You‘ll find many easy instructions for beginners about basic theory if you look up chords, rhythm notation, bass riffs etc.

5
Knowing what chord to play next?
4
Book about development of music
9
Is there any theory to decide a set of plausible chords per measure where a whole melody of a song is given?
1
Essential things to memorize in music theory
1
Is there a constant relation between a song notes and its chords progression?
6
Learn Guitar (and theory) one key at a time
7
What is the most efficient way to memorize chord changes?
0
How to put chords (POP-EDM) under a given lead vocal melody (starting from a good knowledge in music theory)
2
What is the best way to learn to play songs by ear using chord patterns?
5
How to know key of a melody