Are some chord voicings only good in the middle or higher octaves?

I was playing 7th chord inversions on the piano and notice that some inversions don't sound as good in the octaves below middle C. For example, a 2nd inversion major 7 chord seems to sound a bit dissonant when played lower (perhaps because of the minor second interval in the inverted maj 7th chord? ). Is this just my imagination or is this true? If it is indeed true, then why does this happen? 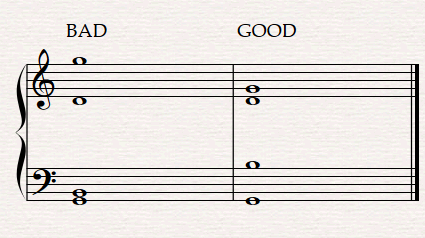 Close chords in the low register sound muddy. 'Colour' notes - 7ths, 9ths, even 3rds work better in the upper range. A minor 2nd between upper voices is acceptable, in the bass register it's just ugly. We can explain this by considering the cacophony of overtones from closely-spaced low notes occupying the same range as the melody.

There are exceptions, and instrumentation is a factor. This (below) sounds muddy on a modern piano. But Beethoven often wrote something similar. His piano, with its shorter strings and leather (rather than felt) hammers had a thinner, brighter tone than the modern instrument. Fewer overtones to fight with each other in the midrange. 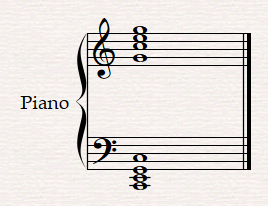 When playing harmonically complicated sounds, the overlapping of the lower notes' harmonics within the pitch range of the upper notes contributes to muddiness, as noted by Laurence Payne's answer. When using harmonically simpler sounds, however, another factor comes into play.

If an organist were to use an 8' flute stop to play a C, E at the bottom of the keyboard (the lower note would be the low C of a cello, though a cello would be much richer harmonically), the pitches would be 65.4Hz and 82.4Hz, respectively, with a difference of 17.0Hz. That difference frequency is low enough that a listener would be likely to perceive a single tone at 73.4Hz--roughly the D between the two pitches--warbling at 17Hz (slightly less than twice as fast as the 10Hz pulses from a rotary phone).

Note that the more harmonically sparse the tones are, the more pronounced this effect will be. Many people perceive the telephone "ringback" sound used in the US and many other countries (which combines pure tones at 440Hz and 480Hz) as a tone with a very fast warble, despite the fact that the 40Hz would be high enough to be heard as a tone in its own right). On the other hand, most instruments produce enough overtones that the sound of playing the C and E an octave higher than those above would be perceived as two distinct tones despite their difference only being 34Hz.

24
Why don't we measure the size of intervals starting from zero?
10
C major 6th chord and A minor 7th chord: same notes but different quality, why?
2
How to write a seventh chord inversion
5
Confused about C6/9 guitar chord
3
Abbreviations for dominant seventh chords
13
Why do we only build 7th chords on the supertonic and dominant of a major scale?
1
Understanding why these specific chords are played?
1
Melodic lines are diatonic, harmony doesn't seem to be
10
Why are second inversion triads considered less consonant than first inversion triads?