My hands hurt while playing bass

Bass is a tough gig when you're only 12. It will get better.

I started playing bass in a band at 13 - we were all a bit clueless & it was decided Friday we really ought to have a bassist [yup, we didn't have one before that… we didn't know any better ;) So i bought one on Saturday & gigged it for the first time Sunday.
That was one heck of a learning curve & though I got away with it, I couldn't claim to have been much good.

My left hand felt like it was about to fall off.

After a month or so I'd got more used to it, but it still wasn't easy. I was still playing simple stuff & my hand still ached.

I found a "miracle cure" when I swapped my full-size [copy] Jazz bass for a smaller Framus - a copy of an SG-style short scale bass by Gibson.
It had a shorter neck & I could get the action lower. It made the whole job so much easier.
With a short scale, the strings are easier to press to the frets, the frets are closer together making transitions easier, less of a stretch. Your right hand also needs less force to excite the strings.
Overall, it's much kinder on young hands. Experienced players might also just love the extra flexibility for chords & bends.

I stuck with that bass for the next 3 years or so, by which time my hands had gained the strength they needed - partly through a lot of practise but also because I was growing older & stronger.

By the time I was 18 I moved back up to a full-size bass, a Rickenbacker 4001, which I have used ever since. [That's now nearly 45 years since I got the first Rikki.]

I found an article on Sweetwater - Long and Short-scale Bass Differences Explained! explaining all about short-scale basses & even has a picture of another version of the SG-style bass just like the one I had way back then - the Epiphone EB-0 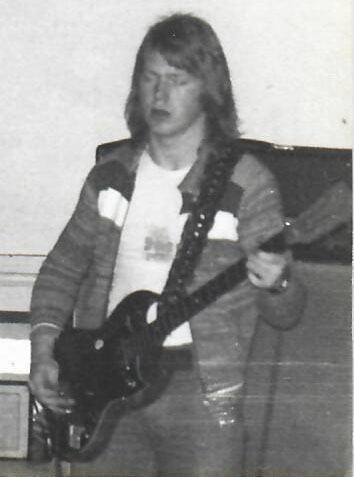 There are a few kinds of pain that can happen when playing an instrument and the solutions are very different:

A lot of bass players use thumb, and two fingers - index and middle.Really good ones will use all available!

It could well be that you're playing too hard. There's absolutely no need. Slapping and popping are different, but I guess you're playing 'normally'. If your bass guitar is badly set up, then you're going to have to fight it. So get that checked. Play through an amp., but if yu're playing with others, and it's a competition for who plays loudest, find some others to play with.

It could be the strings you use. Roundwound will always be harder on your digits - try flatwound or nylon coated, which are much smoother.

Based on your age you are still developing and may grow more. Changes in hand size etc will change the way you play. Other have pointed out that there are different kinds of pain. You could help by describing it better. Is it in the finger tips, the palm, or the meaty part of the hand (by the thumb or under the pinky)?

If you are young and a beginner you are probably still learning to get the right amount of force to hold notes down and pluck the strings. People often get this wrong and think more force is better. This causes a lot of fatigue and eventually pain. If it's in your picking hand and you are trying to play fast (like a flamenco guitar player, or Steve Harris from Iron Maiden) then you are likely playing beyond your skill level and that could cause fatigue and pain. This might explain why it happens with fingers or pick. If you are not using an amp then you might be picking too hard. These are all factors to consider.

It takes time to develop stamina. Posture and set up of the instrument are also factors. If the posture is bad you will stress out your muscles, tendons, and joints. If the set up is bad (action too high) it will be difficult to play.

On a correctly set up instrument, with amplification, it should not be too difficult to play without pain. If you are not taking lessons you may be developing poor posture and technique which will come back to haunt you years later.

I remember when I tried teaching my teenage son to play guitar. He squeezed too hard, so that he cried while trying to get through the lick for "Daytripper".

There is a great chance that you are squeezing the string too hard as well, which takes away speed, hurts your fingers and pulls the note sharp. There is no good to fretting too hard.

If it's the plucking hand (right hand when playing right-handed), I can help less. You might be doing that too hard as well; when I've played bass, I've often switched to pick because I couldn't keep a consistent attack with fingers, but I didn't have pain problems with that hand. (I had to hold my hand the a weird angle to adapt to the different lengths of my index and middle finger.)

So, lighten your attack, develop hand strength, go slowly and keep aware for when and where the pain starts, and good luck.

1
Carving a cutaway in a right-handed bass guitar to better suit a left-handed player
11
Does a guitar ebow work on bass?
7
Achieve samplepad/keyboard synth sound with a bass guitar for playing live?
5
Fretless bass buzz
8
What are some good suggestions for a bass player's plucking fingers?
5
Changing from bass to saxophone
2
Fingers feel clumsy while playing bass guitar
4
Bass picking technique
1
How Do I Adjust The Strings On My Electric Bass?
12
Left Hander forced to learn ukulele and guitar right handed