Why does the exponential curve that shows up in the orchestra not overwhelm anything?

So, I've noticed these ratios of range in the modern orchestra, which is primarily strings:

This clearly shows an exponential decay curve as the range gets lower, similar to this curve: 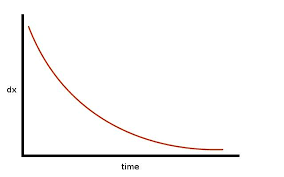 Thus the Violin:Viola:Cello:Double Bass ratio in an orchestra could easily be this:

Now in this question about a possible woodwind predecessor to an orchestra, Ceremonial flute choirs as a predecessor to the orchestra, how plausible is this? I mentioned in the comments and in the main body of the question these same ratios that I listed above and somebody mentioned that this exponential curve is not ideal, that it would lead to too little bass and too much soprano. Which is why I'm asking this question.

Why is the exponential curve a default for the orchestra if in an entirely woodwind ensemble, it would be unbalanced? What is it about the timbre of multiple string instruments that leads to this exponential curve? I know that the difference between 1 and 3 of the same string instruments is staggering(1 gives you a solo timbre that can be more nerve-wracking, almost painful at high pitches(in the case of the violin and viola), soulful(in the case of the cello and to some extent the high range of the double bass), or intensely deep(in the case of the double bass), 3 gives you a more orchestral-type sound)

But in small string ensembles, the ratio is almost 1:1 and is 1:1 in the case of the Trio and Sextet(that is if the Sextet does not include the Double Bass, which some do). Yet as it gets larger and approaches the 60:15:8:6 ratio of Beethoven symphonies, it goes from this 1:1 or almost 1:1 to an exponential curve.

Why is that? Why is it that the orchestra follows an exponential curve with pitch range and small ensembles have an almost 1:1 ratio for all the ranges?

Now, why would you want that in the first place? –I don't think it's only about loudness; the sound silkiness itself that you only get with upwards of a dozen violins is just important part of the aesthetic of symphonic music. But inseparable from that is that those violins serve also as the main melodic role in the orchestra, which does require a robust volume and to get that (with only wooden acoustic fiddles) the vast numbers are also needed – even if, again, increasing numbers is a very expensive way of increasing volume.

The volume-need of the violins is not to persist against the low strings, those could easily just play quieter (as indeed they often do in a chamber music setting), but against the other instrument families which are inherently louder, in particular brass and percussion. Concretely, those instruments are capable of actually transforming a sizeable amount of the power a human player can put in, into sound. That's the reason the bass wind instruments, despite their bigger size, aren't really louder than their treble counterparts. In some cases they are actually quieter, since low pitches need more energy to be perceived as same volume.

On the other hand, on string instruments, except perhaps double bass, you first hit the limitations of the instrument itself. Even at fff, you can't put in all the force into a violin that a trained player's muscles could, because that pressure would just squelch the string.

If you don't mind some equations, you might look at "Why do choirs work?" for a bit of mathematical analysis of a closely-related question.

The key observation in the question there is that the mean amplitude of N people playing the same note together, with random phase-shifts, is proportional to the square root of N; the perceived loudness is roughly the log of this, so about half of the log of N. That makes the cellos a little louder than the basses --- say louder by some increment Q; the violas are an increment 2Q louder than the basses; the violins are an increment 3Q louder than the basses. Of course, that assumes that a single violin, a single viola, a single cello, and a single bass all have the same basic amplitude, which I doubt is true, but I'm not a string player. But the main point is that you don't end up with the violins being twice as loud as the violas, etc. --- there's a linear growth in loudness due to the exponential growth in numbers [again, assuming the same single-voice loudness].

This also ignores two other potentially important factors --- the differing rates of attenuation of different frequencies in a concert hall, and the differing perception of loudness as a function of frequency. It also assumes (pretty correctly, I think) that the listener is the same distance from all four string sections (i.e., that the differences in distances are small compared to the overall distance). That's probably wrong in the first 10 rows, but right thereafter.

Just for adding another (non-acustical) argument to the given answers:

Smaller ensembles need at least one instrument of each part, this results in 1:1:1:1

Bigger ensembles simply reflect and represent the statistical spread of preferential instruments in the normal population.

Not the answer you're looking for? Browse other questions tagged tone orchestra orchestral-strings or ask your own question.

49
Why are orchestras tuned differently?
8
Can someone clarify the range of orchestral strings?
4
Is it common for an orchestra to have 5 string double basses?
3
Limitations of String Instruments
2
Why do lower instruments speak "slower"?
0
I find composing for transposing instruments hard
5
Is divisi notation needed for brass or woodwind in an orchestra?
31
Why is the saxophone not common in classical repertoire?
3
Do any prominent string players tune the top and bottom string to be a just minor 10th or major 13th?