What does syntaxes like T1, D2, and p3 mean in music notation?

I was reviewing tonal harmony basic guidelines when I came across the article Keyboard-style voice-leading schemata and it had notation like this: 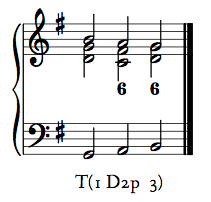 I haven't seen syntax like this before, what's it called, and what does it stand for?

You may also notice numbers above the bass notes. This is basso continuo notation (https://en.wikipedia.org/wiki/Basso_continuo)

Guess they refer to: