I am trying to reconstruct the tuning of the Roman water-organ (hydraulis) of Aquincum. The original instrument had 13 pipes for each of the 4 registers (three stopped pipe registers and one open pipe register), and it was possible to play one, two, three, or all four pipes corresponding to each key at the same time.

The best description I found of what could be the tuning comes from the booklet of "Apollo & Dionysus" cd (https://www.chandos.net/chanimages/Booklets/DC4188.pdf), which is based on an actual hydraulis reconstruction by Justus Willberg:

The organ is tuned to an ancient tonal system, drawing upon a range of sources, including Bellermann and Koine Hormasia (Codex Palatinus 281, et al.). The registers are assigned individual modes (Hyperlydian, Hyperiastian, Lydian and Phrygian), allowing a specific set of notes to be played in each register: proslambanómenos, hypáte hypaton, parypáte hypaton, diápemptos, hypáte, parypáte, khromatiké, diátonos, mése, parámesos, tríte, paranéte, néte. In today’s notation this corresponds approximately to the pitch series D E F G A B♭ B C' D' E' F' G' A'. The organ can also be played with all the registers switched on, which results in a characteristic timbre in which the open Hyperlydian register dominates.

What I understand with my limited musical knowledge is:

My question is: how was this organ tuned? What were the pitches for each register? It seems they could be played at the same time, but would they sound nice together?

Edit:
As suggested by user Owain Evans, this is the instrument:

However, it can't be the setup presented in Hagel's book since (1) Hagels himself doubts the correctness of Walker-Mayer reconstruction and (2) none of the registers in Hagel's picture (borrowed from Walker-Mayer, actually) has the range proposed by Willberg 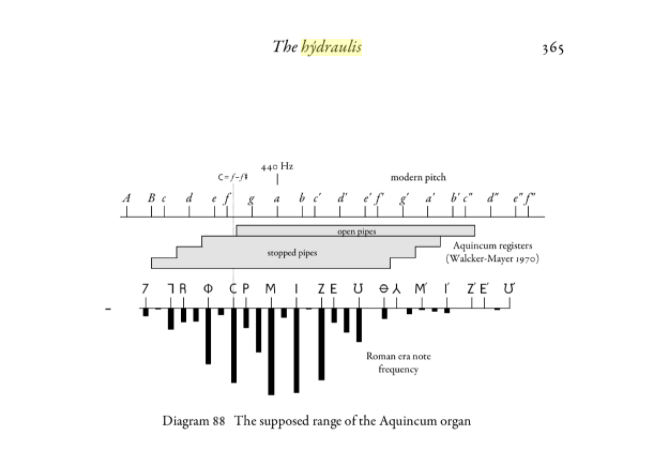 Browse other questions tagged theory organ or ask your own question.

13
Organ technique for pianists
2
Proper organ glissando technique?
5
Is real organ music playable with digital piano?
1
How to get these organ sounds
0
Organ for a Beginner
1
How to practice organ at home?
2
How to read a "Drawbar Organ" tab?
5
How to improvise on organ
3
What to play on a Pump Organ