I am a beginner and I have some really basic questions regarding the notations of this guitar sheet music and how to read them.

First, what is the purpose of the chord's names above the staff ? Also if you look at the first E note ( third note ), how I am supposed to know that it has to be played on the 7th fret of the fifth string ? The tablature gives this information, but by only reading the musical staff I could have played it on the 2nd fret of the fourth string. 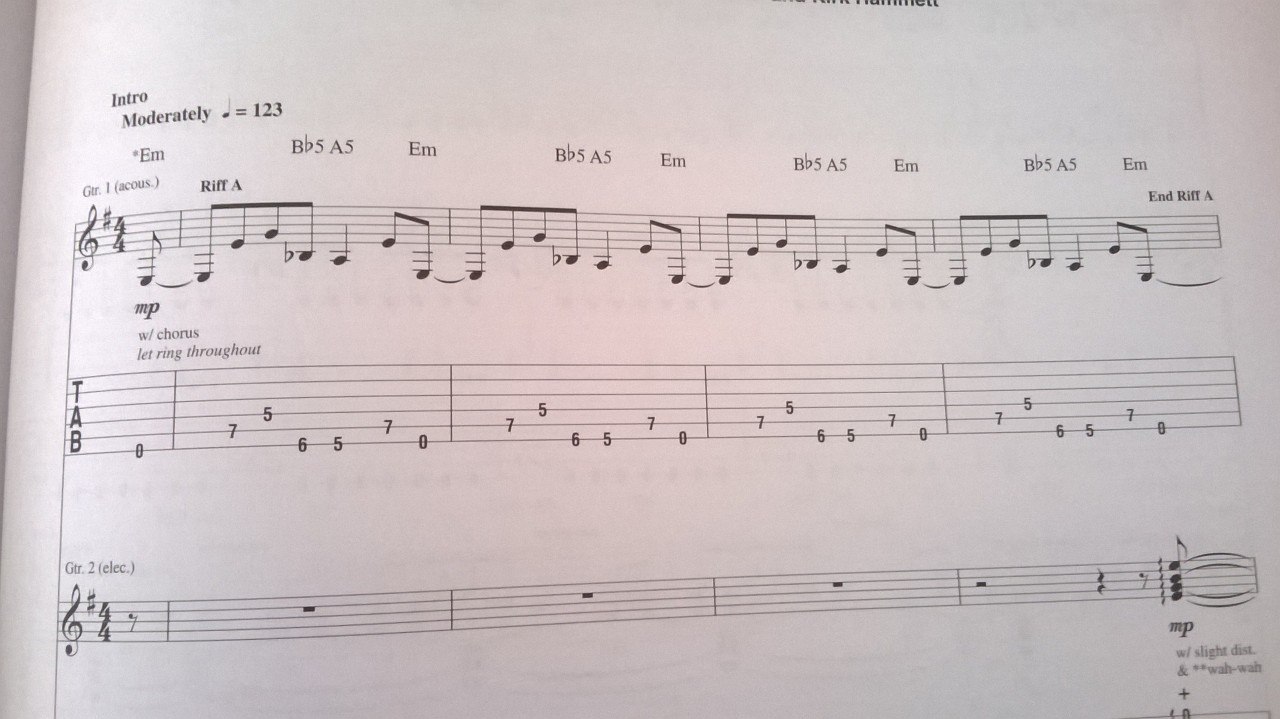 First what is the purpose of the chord's names above the staff?

They denote the harmony of the song, in case you want to provide a fuller arrangement, or to play it with other people. They can even give you a hint regarding which underlying chord shape is under the current melody / lick.

Also if you look at the first E note ( third note ), how I am supposed to know that it has to be played on the 7th fret of the fifth string?

Being the musical staff instrument agnostic, you are right - you cannot know.

Usually, guitar pieces have ad hoc staff indications telling you on which position to play a note, and if you have to bar across more frets.

In this case the tab guides you, but nobody forces you to play things differently if you are looking for a different phrasing / more comfortable way to play things.

Writing chords over staves is very common - it gives the rhythm guitarist or piano player information as to what accompanies the piece.

As far as notes on frets/strings and numbers on tab, yes, of course you could have played that E on 2nd fret D string (or 7th fret A string, or 12th fret E string instead). On guitar there will usually be several places you can play a particular note. That is the nature of the beast. It's only when you consider where to play the surrounding notes that the 'best' position becomes apparent. Whether this is shown will depend on who wrote the tab! Often it is the best and most appropriate position, but not always so. It's something we guitarists need to be aware of at all times, reading dots and/or tab.

The staff notation tells you what notes to play, but doesn't instruct you HOW to play them on guitar. (Though, in context of the notes around it, it's hard to see where ellse you could have positioned that E?)

As you say, the Tab notation adds information specific to guitar technique.

In this case, I think the chord symbols are just for reference.

I see someone is learning Enter Sandman. Classic riff.

Most music for electric guitar has both stave and tab notation. As you say, this makes it easy to find the right fret on the right string. Classical guitar music tends to be just stave. On that, notes to be played on a specific string have the string number marked next to the note; you are expected to be able to work out the fret yourself. We try to minimise hand movement though, so a well-notated score will contain just enough string number markings to put your hand in the right place on the neck for a passage.

As for why you'd play there, and not on the 2nd fret, there's a simple answer - you can if you want! Try it and see how it sounds.

Playing closer to the nut though, the middle G and low A will have to be open strings. That means they're going to ring on after you play them, which will make your version sound different from playing up the neck where fretted notes stop when you remove your fretting finger. By all means try it, because this is a sound you're going to want to use at times, so this is a good piece to be able to play in two different places and get two different tonal choices.

I suspect this is going to be considered backwards to many here, and may elicit some down-votes, but it is not unique.

Also my explanations below are more in general than in relation to this particular song, which doesn’t start with a rhythm guitar playing chords in the intro section, though it does kick in a bar or so into it.

Many of us have foundations in music that are not part of a formal approach. I first learned guitar by taking some time to teach myself basic chords from a book, then sitting in and absorbing from other people who already knew how to play. This isn’t the “right way” or a “better way” to learn than from more formal instruction, indeed it has had its challenges, it’s just a way that many of us have entered and navigated the world of playing music.

This means I have hardly ever learned a song with notated melody as a starting point. Instead it's been important that I internalize the rhythm and cadence of the song I am learning, apply chords to that, and further delve into melody, at first maybe just the “hook” of the song, once that internalization and chord harmony feel natural. This is especially true when the guitar is accompanying vocals or another instrument that's the main carrier of the melody.

When I look at a chart, I first of all consider what the song sounds like; I'm already acquainted with the time signature, tempo and melody, having internalized those things. From that a strumming/picking pattern can be outlined, and the chord names above the staff tell me what chords to play and where. Now I can play a basic version of the song just by looking at the chord names. Some would call this faking it, perhaps, but it gets to the essence of the song right away.

So to directly answer the first part of your question, the chord names above the staff are the first, and sometimes only, part of the chart many of us look at to begin playing a song. While other answers here are correct in describing why the chord names were put there in the first place, from a practical standpoint for many of us, they are often the most basic, direct way to access learning a tune. In fact most of the charts we create, whether original compositions or when picking out someone else’s song, are just chord names, often times over lyrics, and some times over tabs if we want to strictly define the melody.

Not the answer you're looking for? Browse other questions tagged guitar notation sheet-music beginner or ask your own question.

5
General questions about piano sheet music notation
9
What does the roman numeral notation mean for this borrowed chord?
4
Question about "The Place I'll Return to Someday" music sheet
4
Flamenco sketches ear training vs. sheet music
4
What is Sanz's tablature for the baroque guitar?
3
Describe a chord shape?
3
Random articulation in sheet music
5
How to tell if a note is sharp or flat if there is no indicator
1
Reading piano music sheet for left hand play