I just started learning piano a few months ago and I'm getting along well, but the one issue I'm having is I can't seem to "find" certain notes. For example, on Für Elise, while looking up I sometimes play a D instead of an E since I'm not sure how far to move my fingers. Are there any exercises that can help with this since it's really frustrating and it doesn't seem to be getting better.

imslp.org has several piano methods that should be useful. Look for those the scale and arpeggio books by Cooke and Knott, and Touch and Technic by Mason and School of Technic by Philipp.

Finding the piano keys then becomes a matter of placing fingers in a new position relative to some finger already in position.

In terms of spacing, there are three basic positioning categories:

...while looking up I sometimes play a D instead of an E since I'm not sure how far to move my fingers.

Making that octave leap is the movement from my third bullet point. Probably the most direct way to "lock in" that space of an octave is by playing octave chords or scales in octaves... 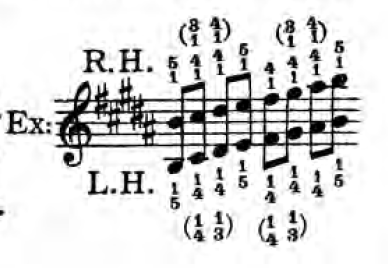 Do drills like that in both hands, all 12 roots, for a few weeks and your hands should really get the feel of the octave distance as well the other intervals of the triad. Don't over do it in the beginning. If your hands get tired let them rest. You shouldn't need to do it for hour and hours. If you do all major and minor chords, 12 roots each, all three inversions it should take about 20 minutes depending on the exact pattern and number of repetitions. Do it daily. Two ways to really start challenging your sense of placement on the keyboard is to do the drills with your eyes closed, and to play a pattern in one octave and then lift your hands off the keyboard completely and move up/down to the next octave.

The "spacing" between notes is called the "interval", and over time your hands and fingers will become more accustomed to various distances. Here are a few suggestions to help yourself along.

To begin, the most important elements are the note before the one you're having trouble with, and the note that is giving you trouble.

There are many other factors that can affect accuracy. A few to watch out for:

later you can transfer and apply Ex. 1-9 to all pieces in all keys as warming ups, and also when practicing the tetrads like dominant seventh E7, A7 and all other 7th chords.

Not the answer you're looking for? Browse other questions tagged piano classical-music exercises or ask your own question.

12
Should I take piano class?
3
Learning piano after nine years of playing guitar
4
How to overcome the difference between weighted and unweighted piano?
18
Piano exercises post-chemotherapy
3
How to alter piano music with left-hand octaves to require a smaller span?
8
Are there specific injury concerns I should watch out for with piano tremolo exercises?
3
Making accompaniments (played on the piano by a beginner) sound better
3
Hand independence for Boogie Woogie piano vs Classical music
5
Is this hand position a bad practice for practicing piano?
0
Exercises to get beter at rhythm (piano)