Beginner needs help with simple modulation from Em to Am

Im new to modulation and need help. Struggling with something I feel is very simple for more experienced people.

Im having fun with a song in Am, but want to modulate to Em for fun as practice. Ive gotten there with hitting a F#dim, Dmaj, then to Em. Sounds smooth. But getting back to Am is giving me a headache. I tried G7 which kind of works, but not as much as I'd like. Looking for something smoother, and feel like I'm lacking more music theory knowledge to know which chords, or adjusted chords will work.

Any simple suggestions? Thanks in advance.

Using a simple chord E7 works well. Being a little more subtle, you could use Bm7 or Bm7♭5 before E7, then on to Am.

There is any number of alternatives, but here's a quick one using bass inversions

or a slight variation with bass movement:

With a melodic line

A punchy melodic line leading to the new tonic can be very effective too. To get to Am, play for example the notes G F E G# A: 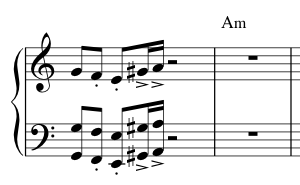 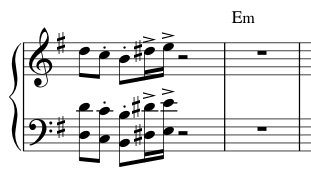 Before we start, let me make one point. Theory books delight in concocting modulatory chord sequences to get the music from one key into another. In practice, we very often 'just jump in'. No preparation, no pivot chords, just start thinking in the new key. This is particularly possible with a very close move like Am to Em.

However, if you want some 'theory'...

The obvious lead-in chord to anything is the dominant (seventh) of that thing. So E or E7. If you want more preparation, preface it by the dominant of that dominant - either a literal secondary dominant (B7) or something else rooted on B, perhaps Bm7 or Bm7♭5.

That's textbook stuff. A bit 'hymn tune' perhaps. But I note you got to Em in the first place via F♯dim and Dmaj7. Not via the 'textbook' B7. That's fine. Perhaps we could stick with this sort of harmonic thinking?

Now, what gives B7 its dominant-tonic pull towards Em? Largely the notes D♯ and A. D♯ pulls towards E, A pulls towards G. In combination they form the potent tritone interval that drives classical, functional harmony. B7 has both of them. D has only one, the A. But one is better than none, and that is a lot of why your D-Em progression 'works'.

You didn't like G7-Am though. Maybe because although G7 contains D - half of the G♯-D tritone that pulls towards Am - it contains ALL of the tritone that pulls to C - it is in fact the dominant 7th of C. Perhaps a G-based chord that ISN'T the literal dominant 7th of somewhere other than Am, but still contains a G♯ and/or a D? And which doesn't introduce notes that are too 'outside' the Em/Am region? Plain G major perhaps? It matches your D-Em modulation. Or Em7?

I could go on. And on. :-) There are SO many possibilities! Music's great, isn't it?

Not the answer you're looking for? Browse other questions tagged theory piano chord-theory composition modulation or ask your own question.