The question is, if the single beat is made up of different notes where should the accent be located? For example: 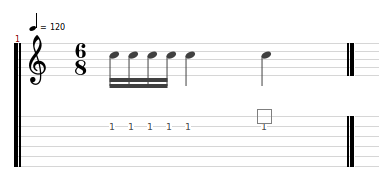 What's the general rule to determine the position of the accent?

The accents for subdivisions follow the same pattern as for time signatures. So, a subdivision of 4, like

And a subdivision of 3 would be

and all of those accents are relative to which beat in the measure contains those subdivisions.

Case C is in 6/8 so, as you say, the strong beat is the first of each three. Your example is written as if it's a 3/4 bar. Strictly speaking, it should be written:

6/8 bars are counted in two groups of three quavers (eighth notes). I've marked the main beats 1 and (1) and you should be tapping your foot on those, even though there is no note on the second one '(1)'.

The first four notes are accented as Aaron described in his first example, and the last two are semi-strong.

Composers have exploited the similarity between 6/8 bars and 3/4 ones for centuries. You could read about this - hemiola, as it's called - here. Or just listen to Ginastera's Malambo, the 4th movement of his Estancia Suite.

Not the answer you're looking for? Browse other questions tagged theory time-signatures or ask your own question.