The "modern" idea of chords and their inversions being functionally equivalent is generally credited to Jean-Philippe Rameau's 1722 Treatise on Harmony. However, figured bass was already in use by about 1600.

This question arises from Do pianists look at the chord letter or notes on the stave to tell what chord to play?. My answer there refers indirectly to figured bass as a "different system" of chord notation. But I wonder whether that description holds up.

Part of the problem is what is meant by the term "chord." It's tricky to interpret the occurrence of that word (and synonyms in other languages) from the 17th and 18th centuries, as there are a lot of different implications.

If, by "chord," the question means something like "a sonority with a root that is invertible" like Rameau would imply, then no, continuo players certainly didn't think of figured bass sonorities in that fashion. (Note: the conception of a "chord" goes back quite a bit further and is generally credited to Lippius as the originator of a "triad" (trias harmonica) in something resembling the modern sense in the first decades of the 17th century. The history is a bit more complicated, as various components of the notion of a triad emerged over several decades, but Lippius is a good anchor point. Rameau formalized a lot of these ideas, introduced the notion of the fundamental bass, and explicitly expanded theories of chords to encompass seventh chords and higher tertian entities.)

However, this doesn't mean that advanced performers thought of figured bass only as atomic intervals above the bass. Far from it. Figured bass patterns encode a lot of information about directionality and types of sonorities. As we know, for example, certain figures are generally omitted in frequently occurring "chords." (A 6 implies a 6/3, for example.) This wasn't just a matter of abbreviation, but had to do with assumptions about the most common intervals creating a sonority above a bass and/or the types of intervals that should be added given one or two written intervals.

Broadly speaking, figured bass players would think of certain figures as having a "unifying identity" (to use the term in the question), just not in the modern sense of an invertible entity with a root. Instead, the identity would often be determined by stereotypical voice-leading and contextual usage. A few examples:

Now, stating the rules in this fashion makes it seem like these are "atomic" intervals, each to be analyzed and understood separately. But seasoned performers would begin to see certain patterns emerge, so that groups of figures would typically be thought of as part of a sort of "family." (One can often see this in the ordering of figures in tables from pedagogical treatises.)

The closest analogy I can make to modern music theory is that continuo players thought of "chords" in a way like modern theory somewhat talks about a notion of an "augmented sixth chord." Forget about the silly geographical names (Italian, French, German) -- the augmented sixth is a chord defined by a characteristic interval (the augmented sixth, specifically above the bass) that resolves in a very particular fashion (bass line moves down by semitone; upper voice of +6 goes up by semitone). The rest of the notes in the chord don't really matter. Yes, they have tendencies too, but you could throw in any junk into that chord -- not just the pitches from the silly geographical names -- and it would still be basically an "augmented sixth chord." (Note: augmented sixths almost always contain a note that is a major third above the bass note too, at least until the 19th century... but explaining that would take us on a needless digression. Nevertheless, that's another example of "chordal" thinking, as the 3 above the bass would almost inevitably resolve down by step when accompanying the ♯6.)

Also, while some theory textbooks talk about "inversions" of the augmented sixth, that's a weird idea historically. The augmented sixth is a notion of a chord that survived from the continuo playing era, involving figures with a ♯6.

In that sense, figures involving a ♯6 constituted a sort of "family" of sonorities that could I guess be thought of as a type of "chord." Similar families developed around certain chords with 4 or ♯4 or 2, for example. So a 6/4 chord and a 5/4 chord both were chords that tended to occur on strong beats, typically followed by a 4-3 suspension resolution. Today we'd label them with different Roman numerals, but the 6/4 and 5/4 had a kind of affinity to continuo players in their function.

It was such patterns that people like Rameau noticed. And he then distilled these into the notion of a "dominant seventh chord" where all of those notes in the previous paragraph were analyzed as a "seventh" of a chord with a nominal imaginary "root" to be heard in his concept of a "fundamental bass." Effectively, Rameau was trying to simplify the tables and families of figured bass symbols by grouping them into patterns. In the process, he oversimplified a lot of harmony and lost a lot of detail, while confusing what might be called the "function" of many sonorities (e.g., the 6/4 is a dissonant part of a suspension governed by special rules, while the 5/3 and 6/3 are often consonant "chords"), which is why Bach and some of his students had such a strong reaction against Rameau.

Anyhow, to sum up, continuo players certainly saw and learned many patterns. They often tended to group certain sets of figures by their general tendency. And they also understood figures within context, implying certain resolutions or even other longer patterns (e.g., sequences). They learned patterns and understood many figures to denote a particular kind of sonority (a "chord"), but not necessarily with the implications of modern triadic theory with its invertibility, "root" notes, etc. If anything, "roots" were much less important than "active" intervals that demanded certain types of resolution or melodic patterns (like the augmented sixth).

Figured bass tells you which chords to play.

Note that a "borrowed" chord is Bach's term for an inverted chord.

Thus you can see that Bach clearly talks about chords.

The two quotes are quoted from this link: J-S-Bach-s-Clavier-Figured-Bass-Instructions

I added the following addition to this post the 17th of April 2021:

In the comments section @phoog has asked this question:

Is the original German text available online? It's not at all clear that Bach is talking about "chords" since the translation is surely modern, and may therefore be anachronistic

So here is the image I mentioned. You can find it by scrolling down towards the end of the book: 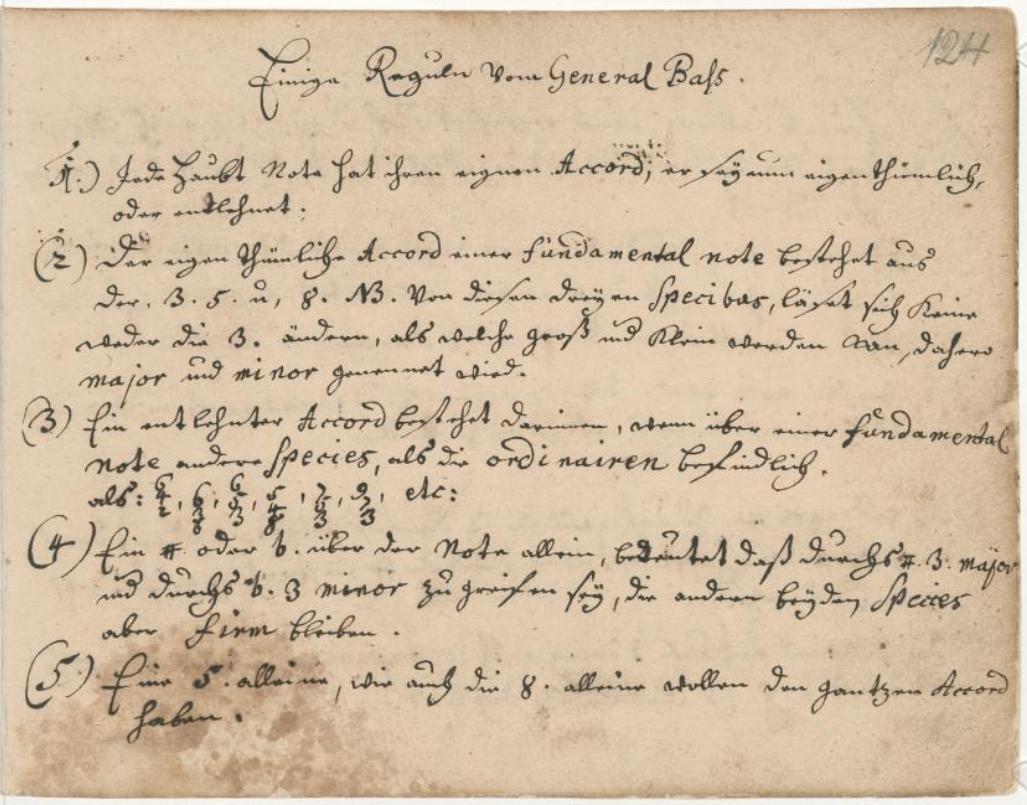 One of the common terms is "chord of the sixth" which includes both "chord" and the interval name "sixth" so I think it really needs to be considered both.

From what I gather they certainly had the concept of chord. Inverted chord would have been identified as different voicings of root position chords. I think the main difference is conceiving harmony as voice leading/counterpoint versus root progressions.

FWIW, in relation to the other question about jazz chord symbols, I would agree that figured bass is another kind of chord notation system.

24
Why are thirds used to construct chords?
6
Do pianists look at the chord letter or notes on the stave to tell what chord to play?
10
Before the advent of Roman-numeral analysis, did musicians conceptualize applied/secondary chords as somehow moving towards their temporary tonics?
9
When was the concept of a "triad chord" first introduced?
3
What interval sequences "defined" Fux's counterpoint?