Can you solve these figured bass queries? 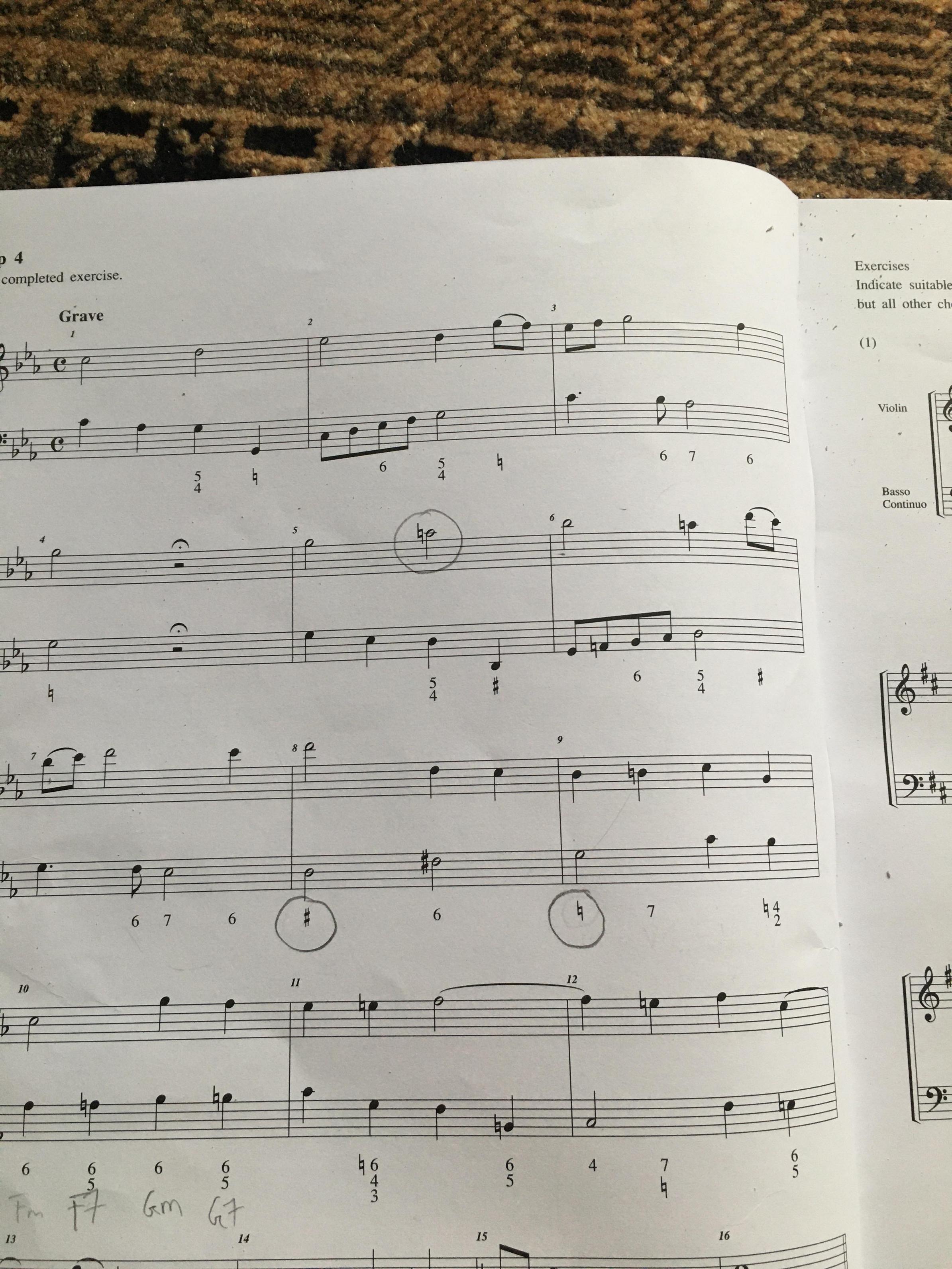 Hi guys- I'll try and keep it brief. Working through a figured bass workbook and came across a couple of points of confusion.

In bar 5, we seem to have just modulated to G minor, as shown by the A natural in the top part. The piece was originally in C minor, with three flats. Shouldn't the 5/4 figure underneath the A natural (and D in the bass) have a natural sign next to the 5, to cancel out the A flat in the key signature?

At the beginning of bar 8, we have a major chord 5 in the figure, as shown by the sharp below both Ds. I initially figured this as a minor chord 5, which then turned into a major chord V later in the bar (at the first inversion chord with F sharp in the bass). According to the textbook (what you see in the picture is the answer sheet), this is wrong. Can somebody please tell me why? Or are both answers legitimate ?

In bar 9, we have a natural sign below the G in the bass, which should naturalise the B above it. However, the B directly above the G is STILL flat, and only the B on the FOLLOWING beat is naturalised. Shouldn't the natural sign therefore appear below the '7' underneath the B natural on the next beat?

BONUS QUESTION: Well done for making it this far! I have one more question- just in case you aren't having enough of a blast!

In bar 10, the harmony moves from F7 to G minor. F7 is chord VII in G NATURAL minor, but (apart from this example) I have yet to come across the natural minor scale being used in figured bass. Until now, I have only seen chord 7 in harmonic minor, or V7 used as a dominant. So can V7 be used in this way in figured bass as well? Or is there an alternative explanation?

Thanks so much for any time spent on this,

Just a few quick clarifications to onto Aaron's answer.

In many historical figured bass practices, accidentals were sparingly used with figures and only when absolutely necessary. In fact, naturals in historical sources were almost exclusively reserved for the third above the bass. Other figures were generally modified by a slash (which usually meant to raise by semitone, but in some practices and on certain figures to sometimes lower by semitone), and occasional flats.

A "5" in these practices is generally assumed to be a perfect fifth above the bass note, regardless of key signature. A slashed "5" might mean an augmented fifth, but in some places and times (notably early 18th century France, if I remember correctly, but it's been a while) a slashed "5" could also indicate a diminished fifth.

Modern editions often regularize and standardize figured bass much more than the variants encountered in original sources. (Not that this is necessarily historical notation, just that it was common historically to use a plain "5" to mean "perfect fifth" even if the accidental wasn't clear from the key signature. And I think this may be following that convention.)

It's actually a standard Phrygian half cadence in G minor (i.e., iv6-V, here with 7-6 suspension). Not sure where the "Neapolitan" Aaron's answer discusses is. But the point is that a standard Phrygian half cadence will always end on a major V chord, here D major, as indicated by the sharp. This whole phrase is in G minor, and the default dominant chord should be D major in most contexts.

Agree this is likely an error, though again, historical sources are often rather inexact about placement. My guess is that the natural is supposed to be under beat 2, with the 7 on an offbeat (to be added as seventh), and the typesetter just messed up (as many typesetters do with figured bass). But it could also be a compound 7/♮ figure.

This is a harmonic sequence: Fm-F7-Gm-G7, all in first inversion. Parallel first inversion chords are a common baroque sequence, here ornamented by the rising chromatic bass line. I disagree with the interpretation of the B♭ as a "chromatic passing tone," as that implies that that it's dissonant with the harmony above it (which it's not). It's a chord tone and occurs on the beat.

The chordal motion here is subservient to the common parallel 6/3 chord sequence, but one can also see the F7-Gm progression as a sort of "deceptive" motion, like a deceptive cadence. (That is, F7 would normally resolve to B-flat, but it can also go V7-vi, thus resolving F7-Gm.) That's actually why the chromatic sequence works well harmonically, as it's a familiar harmonic motion, even though the melodic leap (in the top voice) in a deceptive progression would be less common. Again, though, it's being driven by the sequential motion.

Not the answer you're looking for? Browse other questions tagged harmony accidentals figured-bass or ask your own question.