The attached images are a page from Jack Perricone's Melody in Songwriting. I am familiar with the concept of stress patterns in music, but, honestly, have no idea what the hell he's on about here.

Firstly, how would you describe the difference between "Rhythmic Stress" and "Metric Stress"? It seems to me the metric stress is just the stress outline for quarter-notes of different time signatures, while the rhythmic stress focuses on subdivisions as well.

Secondly, what sort of principles do you suspect the author is utilizing to come up with the "Summative" stress? I came up with the following "addition rules" before getting frustrated:

Whether you agree with the author's analysis or not, can you at least help decipher the principles he is using? Thank you. 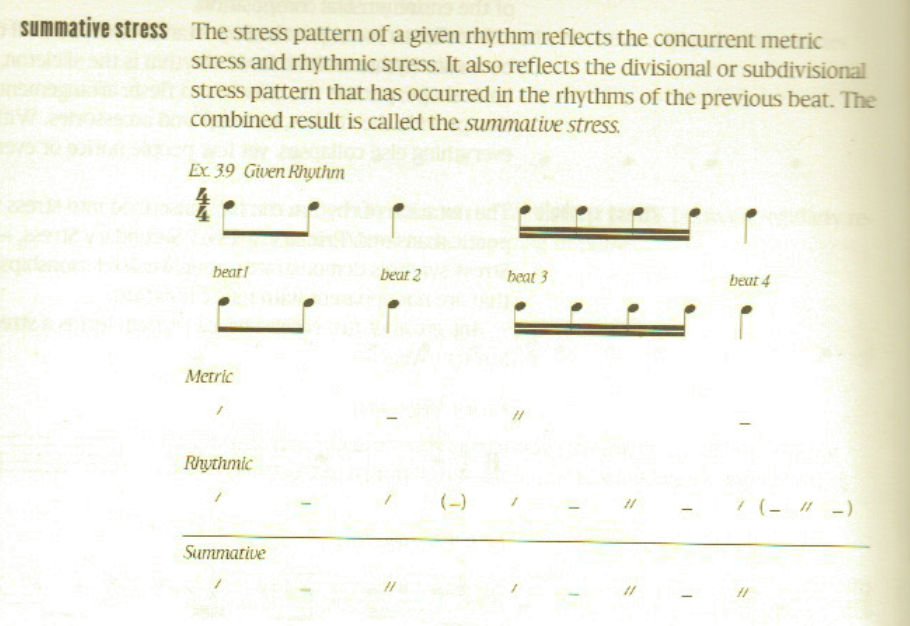 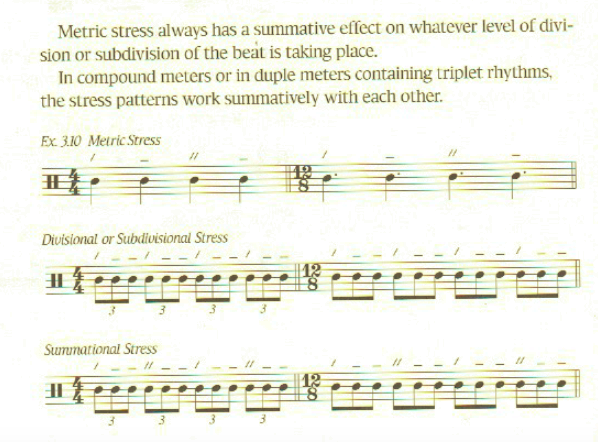 How would you describe the difference between "Rhythmic Stress" and "Metric Stress"?

As you say, metric stress is the basic beat pattern for the given time signature. It's not strictly accurate to link this to the quarter-note, though. For example, in 3/16 time, the metric stress of strong-weak-weak goes with the sixteenth note.

What sort of principles do you suspect the author is utilizing to come up with the "Summative" stress?

He's saying here is that rhythmic stresses combine with the metric stresses. For example, in a triplet starting on the beat, the rhythmic stress pattern is strong-weak-weak, regardless which beat it occurs on. However, if you have a measure of 2/4 time comprising two triplets, the "strong" beat of the first triplet will be stronger that the "strong" beat of the second, because metrically beat 1 is stronger than beat 2.

EDIT: Understanding, based on your comments below, that your intention is to fit lyrics to the "natural" metric/rhythmic stresses, I would say that the unstressed half-beats would remain that way, treating them as effectively equal. The on-beats would go [ strongest 3rd-strongest 2nd-strongest weakest ], which matches the standard 4/4 pattern. So the composite would be [ / u /// u // u //// u ].

I have no disagreements with Aaron, Perricone, or you. As you pointed out, however, Perricone didn't explain what he meant by 'summative'. Your 'math' seems correct. I'll offer another way to look at it, mathematically. (This is not any standard methodology; just my interpretation of Perricone's work.)

Here's a re-interpretation of Perricone's example. I've expanded the quarter-notes to tied triplets, to align them for easier addition. Tied notes are assigned the neutral value 'pf', or 0. 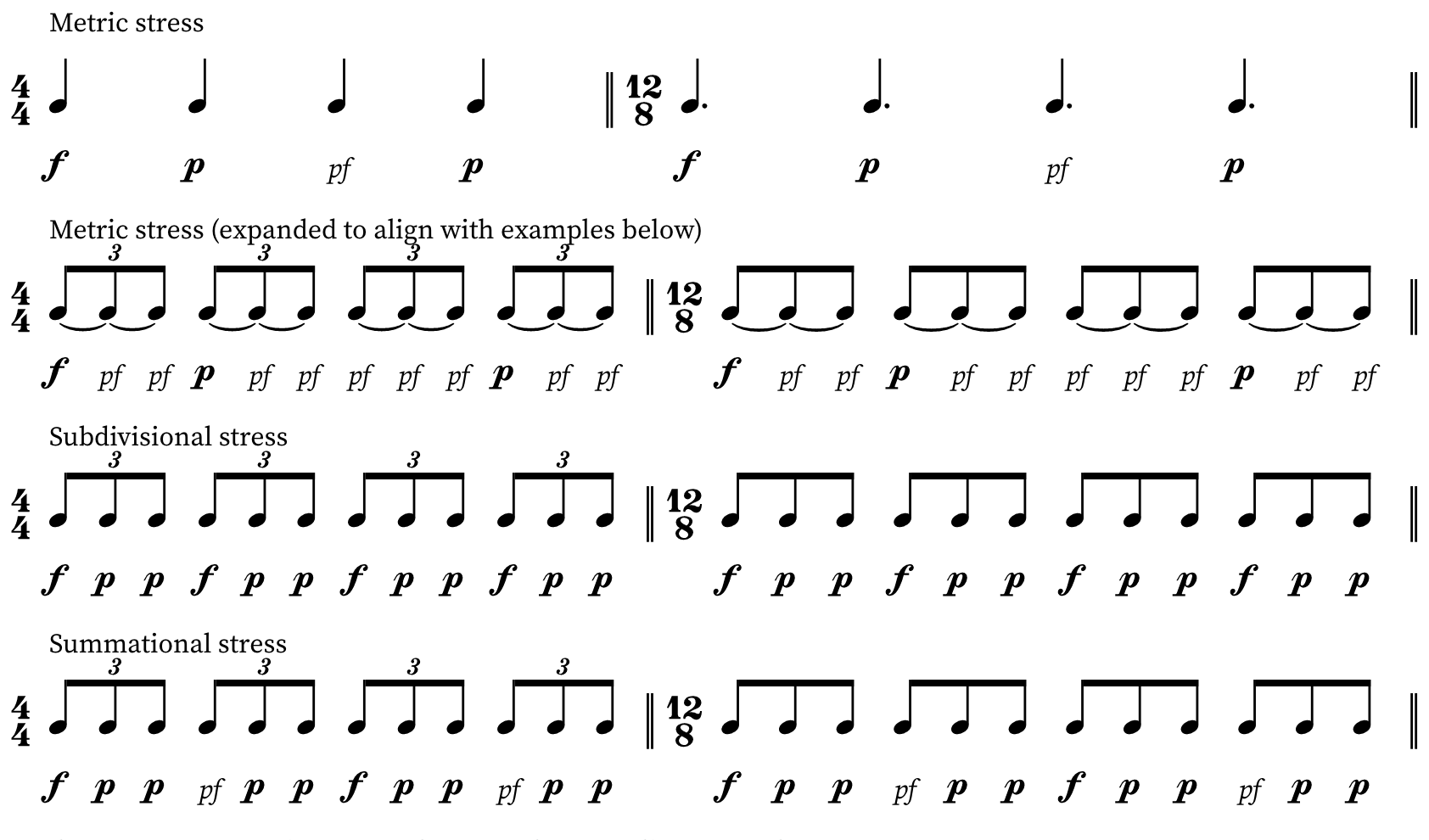 Although I don't exactly disagree with the other answers, my opinion is that the question is looking for a perfect mathematical system where there likely is none. I don't think the author of this book was intending an exact method with precise "rules" for "summing" the stress patterns.

Rather, as this is a book on songwriting, my guess is that it's just an ad hoc method for collapsing many levels of potential rhythmic/metric stress into the 2-3 levels of stress needed for text-setting. I'm assuming the author chooses three levels, with the intermediate stress level able to take either a stressed or unstressed syllable, depending on the text.

My reason for saying this is because I think before worrying about the mathematical system to create summative patterns, one first would need a rigorous mathematical way of defining where the rhythmic stress indications come from. And from the examples given, I'd say that's rather ad hoc, based on the local amount of rhythmic activity rather than the global "weight" of various beats or stresses. In the examples given in the question, one could identify 4-5 levels of stress, but that isn't helpful as a guide for text-setting. Instead, for text-setting, one needs to identify patterns of strong and weak syllables that roughly alternate. (It's rare to have more than a few strong syllables in a row or a few weak syllables all in a row.)

Unless there are more clarifying examples in the book, the summative just appears to be a rather loose way of combining both the global (metric) stresses with local (rhythmic) ones that are more dependent on the specific rhythm. Or, to state the principles in words, I think the author is basically saying, "Match stressed and unstressed syllables to the local rhythmic patterns, but don't forget to also give particular weight to the stresses created by the overall meter."

However, all of this is a tentative interpretation based on only the limited excerpt given in the question and some of the comments -- I haven't had a chance to look at the actual book for clarification.

Not the answer you're looking for? Browse other questions tagged notation rhythm melody meter or ask your own question.

6
Rests in 10/16 time
3
Understanding Rhythm with Time Signatures
0
How should I understand time signature?

3
Metric modulation, ordering of the notes around the equals sign
9
What are the various ways of vocalizing rhythmic figures?
7
Stress in music
2
Alternative ways of notating this example of metric modulation
0
Tips on improving rhythmic notation
10
Is there a term for metric equivalence analogous to "enharmonic" for pitch equivalence?
1
Rhythmic analysis examples by jack Perricone
8
Metric Modulation: Length of 'swing' notes
8
Standard or fundamental melodic patterns
2
What is rhythmic counterpoint?