Which modulation is correct? (amongst other things!) 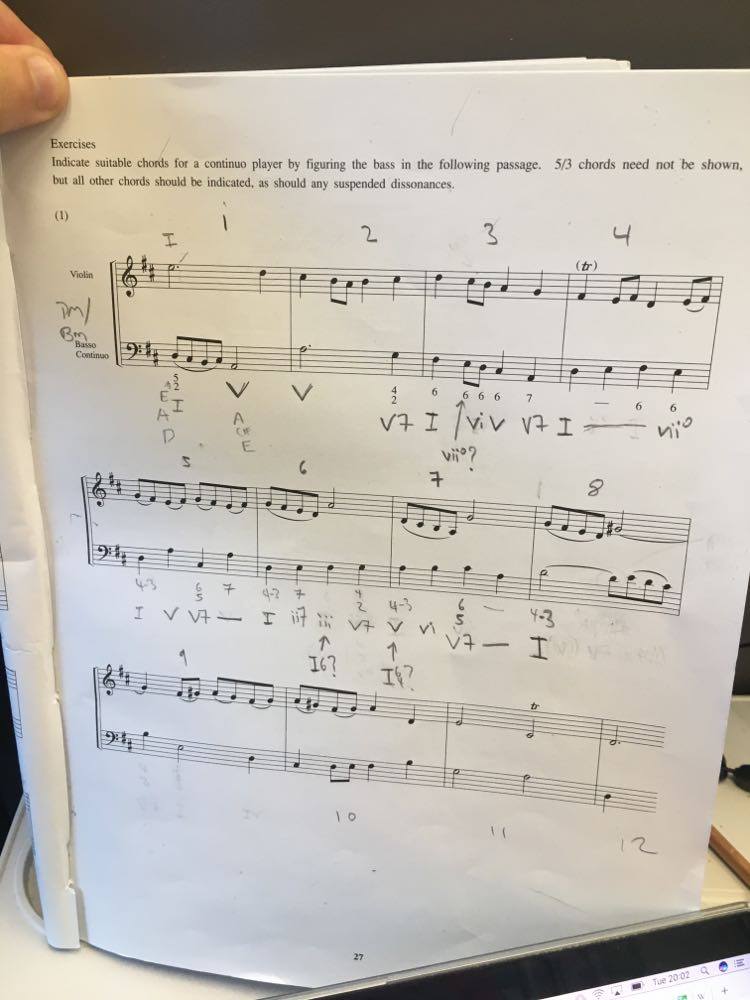 Hi guys. I’ll try and be as concise as possible. Forgive the messy score, its just a product of the confusion! I have a few query areas, but please feel free to correct me in any other areas.

Bar 3- According to the figure, we have a half dim7 on beat 2, before chord vi. Is this correct? I have not come across chord vii used like this before.

Bar 6- here we have step-wise movement in the bass. I have gone with chord iii in root position for the 3rd beat. I almost went with chord I in first inversion instead. Is this right? Is chord I6 just as valid an option?

Bar 7- The last beat of bar 6 I viewed as V7, which should mean that we then land on D in bar 7 on beat 1. However, A is in the bass, so the D would have to be a second inversion chord. It seems as though a second inversion chord cannot be an option here, as it would be on the strongest beat of the bar, and not followed by Va. Instead, I went for chord V, but I am unsure whether V7 moving to V is valid? Perhaps the step-wise movement in the bass makes the D 6/4 chord okay?

Bar 8- my main conundrum. Here, it looks as though we have a key change to either A Major or F sharp minor with the introduction of the G sharp on beat 3. However, I tried both and ran into trouble:

F sharp minor:   I then tried to view it as a change to F sharp minor. This time, I viewed the second half of bar 8 as Csharp7, awkwardly viewing the D in the bass as an accented passing note (on beat 3) before arriving on E off the beat. Bar 9 beat 1 I again viewed as a continuation of V7, this time now in third inversion. Then, beat 2 I viewed as a move to the tonic FsharpM7, again in third inversion. However, neither 7th has been prepared in the previous chord. Do the preparation rules not apply when the 7ths are in bass?

So, which is the correct modulation, and why?

I think the entire first two bars are dominant. 5/2 on the first note (D) are E and A. That makes the D an unprepared suspension, sort of resolving to C♯ on the next half-beat but decisively resolving to A on the third beat.

2
Can you solve these figured bass queries?
0
Is this some sort of suspension? If so, how do I write it in?
0
Who knows whats happening in this score?
0
Have I successfully/legitimately modulated?
2
Is this a Neapolitan 6?
2
Is this a deceptive cadence?
0
Roman numeral analysis of exam practice exercise: "Polish Song" by Hiller
0
(REVISED): Roman Numeral Analysis of Fuchs- 'Mother Tells a Story'
2
How do you figure an accented passing note in the bass?