Can I improvise inversions when my piece has slash cords?

I'm new to learning to play piano from a fake book. I've read that when you play a slash cord, the note on the bottom of the slash is supposed to be played in the bass. However, I've also read that the improviser can invert chords when they want to help create a smoother bass line.

I'm wondering what I should do when I'm playing a piece that contains both slash cords and non-slash cords. Does this mean I'm free to invert the non-slash chords whenever I feel it's a good idea, or does the presence of slash chords imply that the other chords are meant to be played in root position?

what I should do when I'm playing a piece that contains both slash cords and non-slash cords.

Fake books normally don't contain original arrangements or compositions. Like the editor or arranger has supposed to play a chord in root position or a slash chord (which might be an inversion - s. the comment by Tom) it is always up to you as improviser to play the bass line like you want (root or inversions) and what you think sounds fine. You can also play passing tones as many as you like to make an interesting bass line or play some riffs below the chords.

Does this mean I'm free to invert the non-slash chords whenever I feel it's a good idea?

Exactly, you are now the arranger, composer, you are not the slave of any other.

Does the presence of slash chords imply that the other chords are meant to be played in root position?

No, except of the final chord! Most others could be inversions, but you will find out that often on the beginning of a phrase the root position is preferable, or at the 1st beat in a measure, every second beat could be the fourth or a passing tone.

Play some chorals, pop songs and analyze when there are inversions.

Even if the book doesn't propose an inversion you can e.g. play a progression I-Ib7-IV-IVm in the bass C - Bb - A - Ab etc.

Inversions are largely up for grabs, except when they aren't! And the places where they aren't are where you're likely to find a slash chord symbol.

Here's two ways of ending 'The Saints' (the cliche @Albrecht Hügli was referring to in his answer, I think.) With slash chords and without. Play what you like! But you deserve to be offered the information in the second version, whether as notation or as slash chord symbols. 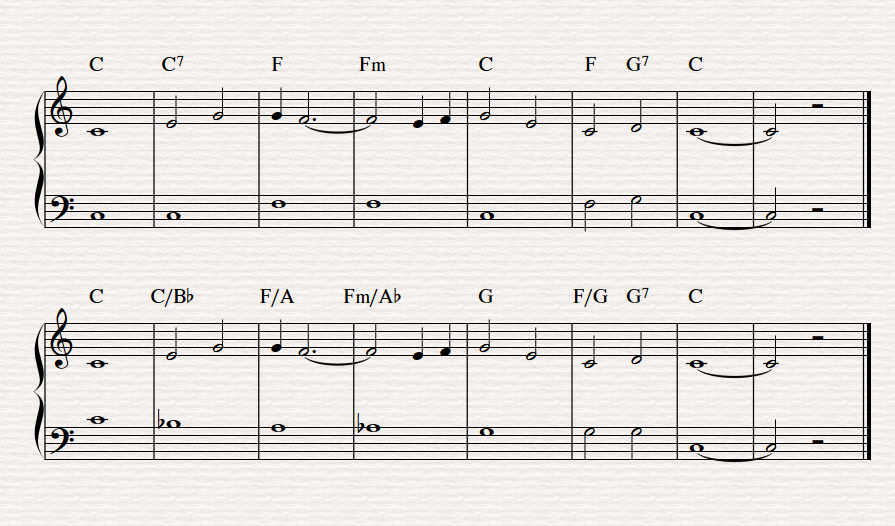 Not the answer you're looking for? Browse other questions tagged chords chord-progressions chord-voicings or ask your own question.

8
What does the chord notation X/Y ("slash chord") mean?

8
Can bass chord notes be different octaves after playing the root?
4
Does a chord imply a change in the key signature?
5
What is the name for this kind of chord chart?
2
Hearing Chord Progressions
8
To Slash or not to Slash?
8
How to accompany with piano in latin music when given only chords?
4
Notating "enharmonic" chords, e.g. iv7 vs bVI6
2
Chord inversions? What does 'C' mean one to play?
8
Removal of the 5th in extended chord voicings