What is going on in this left hand comping by McCoy Tyner (Bb minor blues)?

I understand the basics of fourth-voicings and mccoy's style, moving fourth voicings diatonically through a scale, and occasionally using chromaticism to shift and play out.

I find this though very hard to try to analyze a transcription of something by him. How to assess when is it a standard fourth voicing, when is it part of a certain scale, and when is it just a out-of-scale voicing to provide tension.

An example is this great transcription of his solo in A love supreme's Pursuance.

I don't understand where these left hand voicings are coming from. Focusing just in the first pass of the Bb- blues from (0:15). 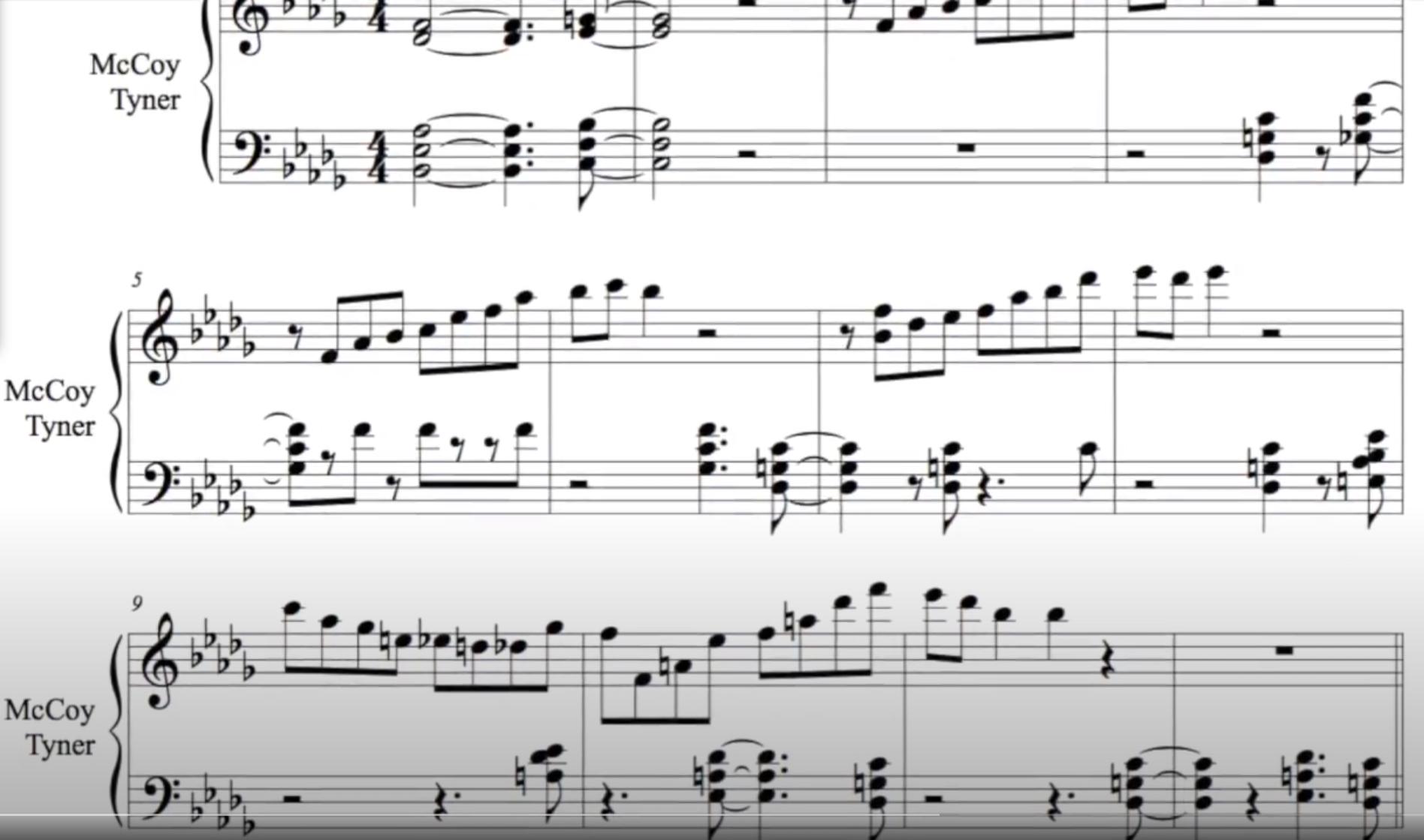 It starts with a common fourth voicing on Bb which shifts to C, this is the only thing I recognize he does a lot, playing with a Bb-Dorian sound.

So to fit them in the context of a Bb minor blues, the most likely sequence could be something like:

Does it make sense to try to make sense of the origin of these chords? Or is it a more of a playing-out approach without much regard to the specfics of the chords, but rather getting a "maximal chromaticism / tension" sound?

This post lays out a basis for analysis, considers the music in four-bar groupings, and finally summarizes the analysis.

I propose that Tyner isn't playing in a single mode. Because modal harmony divorces itself from major/minor tonality, focusing more on a (scalar) collection of pitches and avoiding triadic tonal functions, Tyner can oscillate between and mix various modes, never fully committing to any of them.

I also consider that the abstract structural form as:

As indicated in the OP, Tyner begins with a standard Bb - C quartal voicing projecting Bb Dorian (i.e., "altered" minor). I suggest that these are actually "inverted" F - G quartal voicings. Since we're in Dorian, projecting scale degrees ^5 (F) and ^6 (G) defines the characteristic modal sound. And playing a quartal "V" chord (i.e., rooted on F, the V of Bb) where "tonic" harmony would go (Bb minor/dorian), is very Tyner-esque.

The Db-G-C chord in bar 4 is a prolongation of Bb Dorian, using pitches from that scale, but it also can be understood as a shift to Db Lydian (i.e., the "altered" relative major of "altered" Bb minor). Tyner is reinterpreting the "I" chord from being rooted on Bb to being rooted on Db. The function is a quartal/modal "pivot" chord. Note also that the Db could be viewed as V relative to the upcoming Gb chord.

The Gb chord at the end of the fourth bar is an anticipation of bar 5, so will be discussed in the next section.

With bar 4's Db Lydian ("altered major") chord as the new "I" chord, the Gb chord in bars 5 and 6 is the quartal IV chord, which then returns to the quartal "altered" I chord of Db in bar 6, anticipating bars 7 and 8.

To understand the final chord in bar 8, consider that Tyner is about to return to Bb as the "tonic" for the purposes of the upcoming "V" chord in bar 9. The final chord of bar 8 can be re-spelled (and re-voiced) as E-A#-D#-G# -- another quartal harmony -- this time serving as a "leading-tone" chord moving to the "dominant" of Bb minor: i.e., F.

Bar 9 is an prolongation of the "leading-tone" chord anticipated at the end of bar 8. Tyner then arrives on the "dominant", F, of Bb in bar 10. Though obscured by the preceding ambiguities and by the voicing, bar 10 is an F7b13 in literal terms (the F is in the melody), though it's not heard as such.

In fact, given the Eb in the bass, it's reasonably interpreted as a quartal "II" chord, playing a "dominant" role by setting up the return to Db as the final chord.

It's fascinating to observe that the solo line does, in fact, treat Bb as the ending "tonic", whereas the left hand treats Db as the "tonic".

Here is how the chords relate to the abstract 12-bar blues framework. I identify chords by their root.

The turnaround is like you said bVI13 to V7alt but since he doesn’t play roots either chord can be interpreted as a tritone sub as well.

Great question and link to the solo and transcription, McCoy was truly unique and special in that time period.

I'd say forget about the chords. The left hand is obviously based on quartal harmony with the stacked fourths, where any member can function as the root. Just picking out a couple examples between bars 29 and 30, he moves chromatically half a step up in the left and right hands (truck driver modulation), also between bars 66 and 67, where the stack fourths on left hand with half step between the bottom and top notes (say E and F) makes it easy to lead in to a chromatically displaced figure of the previous right hand pattern.

Not the answer you're looking for? Browse other questions tagged theory piano jazz blues chord-voicings or ask your own question.