Is this a harmonic sequence?

Currently working on this keyboard piece, came across something that I think looks like a harmonic sequence.

We are newly in D minor, and the bars in question are labelled 1 and 2 (squint and you'll see them).

I have loosely marked the harmony as V7-I-V-?-landing back on minor i. There is a b flat repeated on each chord (which is never a chord tone- perhaps some sort of pedal point?), and there is a descending chromatic line also circled starting on a G natural (which oddly has a natural sign next to it even though there are no previous g sharps in the piece, or g sharps in the key signature). It ends neatly back on i.

Wondering if anyone can shed any light on this harmonic device? So I can understand it and look out for it in the future! 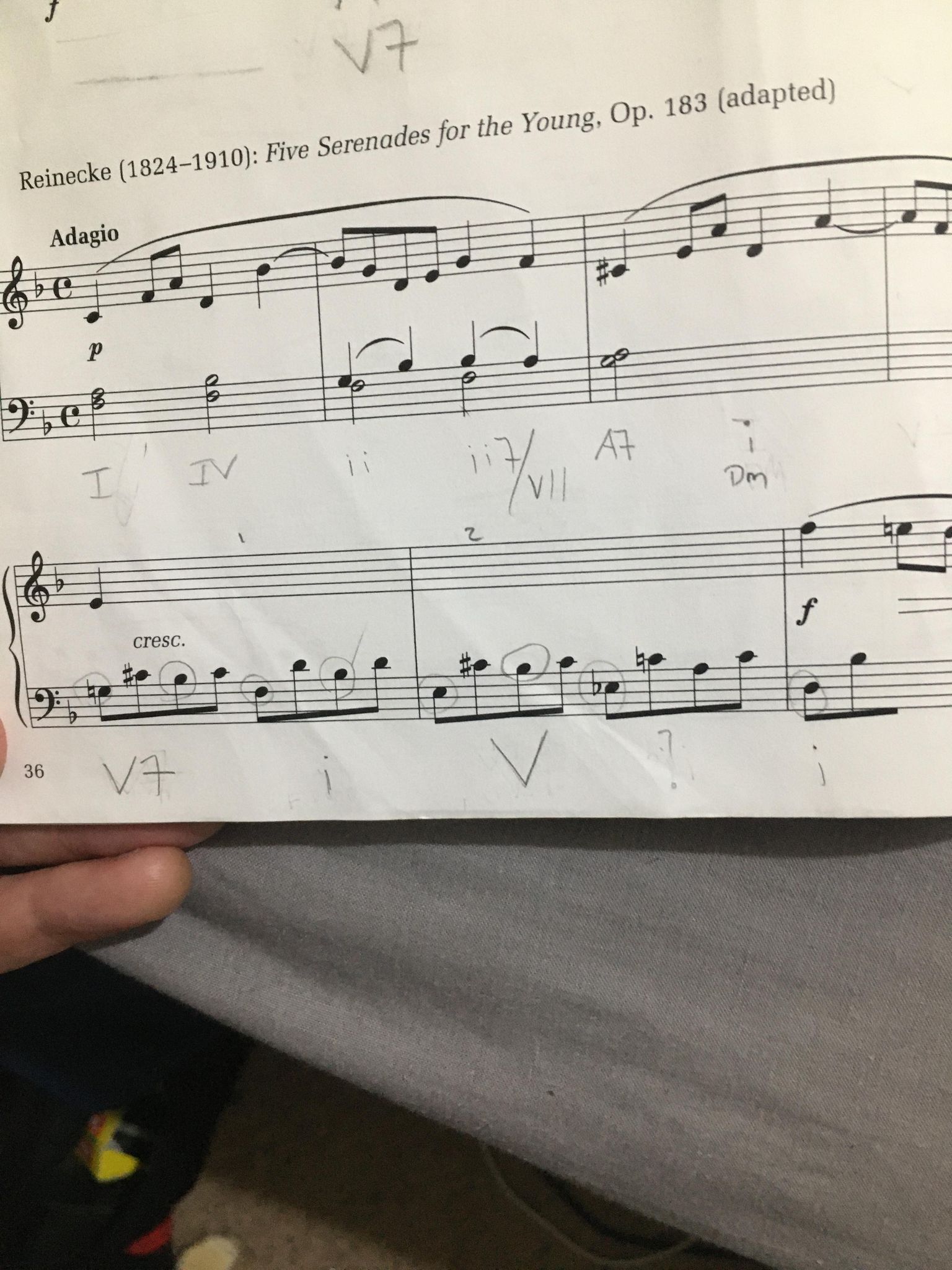 What you mean that it were the relative minor (i=dm) is correct in the 3rd bar in the upper lines.

The measures in question:

In the next bar the harmony goes back to the VIIdim (which has dominant function to Dm - like you note correctly (V).

VII can be interpreted as a rootless V7 or Vb9.

So the first 3 chords could be heard as A7 Bb A (what we often have as progression in a false cadence V7-VI in dm.

The last to chords are A,C,Eb-> Bb (1st inversion). This can be analogous VIIdim/IV in F major - or V7/IV = rootless dominant F7 of Bb (subdominant) The tonic F or its substitution A,C,Eb becomes the dominant 7 of the subdominant Bb.

Is this a harmonic sequence?

I wouldn't call this an ascending sequence, which would be A7->Dm (if the 2nd chord were Dm and not Bb) and F7->Bb (but without the dominant chord (3rd chord in question) between vi and V7/IV.

Here is the entire music - just for listening:

This passage is (locally) in Bb major (IV, relative to F) and does not involve a sequence, just step-wise bass motion. For ease of notation, I give the analysis in Bb.

"c.t.o7" stands for "common-tone diminished seventh", which is a special use of the diminished chord to prolong another chord: in this case, Bb major. For more information about the common-tone seventh chord, see this related answer.

The first phrase is clearly not a harmonic sequence. It elaborates a tonic pedal, a totally different kind of pattern. (I would mark beats 3-4 of bar 2 as an appoggiatura on I.)

It's hard to be specific about the second phrase, the treble is missing! (This looks like an assignment to complete the treble.) But the accompaniment part hints at D minor where the C# leading tone first goes up to D then it's repeated but chromatically goes to C natural. The way that leading tone is repeated categorically makes this not a harmonic sequence. If it were sequential, it wouldn't be repeated but transposed to some other degree.

Not the answer you're looking for? Browse other questions tagged theory harmony exam-grades or ask your own question.

5
Understanding function of diminished chord in Paganini's 4th caprice
5
Can chords found in parallel modes of the relative minor of a key (or relative major when in a minor key) be considered borrowed chords?
3
A chord progression from Leavitt: how to analyze the diminished chord

3
Why does VII have dominant function in natural minor
2
Why does this modulation sequence work?
3
Are these upper voices in this final passage from Handel a bona fide F7 chord or some kind of non-chord tones?
0
Is the Descending Fifths sequence also an Ascending Fourths sequence ? Who is the original source of this sequence?
2
Can you solve these figured bass queries?
2
Is this a Neapolitan 6?
0
(REVISED): Roman Numeral Analysis of Fuchs- 'Mother Tells a Story'
0
A natural minor scale with raised fourth
1
How to interpret this blues-like chord sequence?