Does anyone know how to play an arpeggiated chord when the wavy vertical line beside the chord is not all the way alongside the chord? 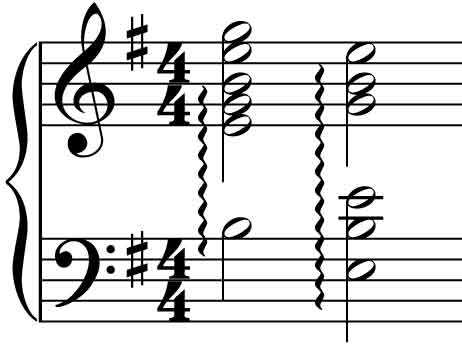 Here are more of such chords coming next in the piece:

For the first chord, play the B E G and B with your left hand, and the upper E and G with your right. Like this:

How rolled chords are played allows room for interpretation in regard to whether the unrolled, simultaneous note(s) are played at the beginning or end of the roll.

Is this a thing?

Yes, but it's usually written as separate chords, one rolled and one not. For example, see the chords in the Poco più lento section of Chopin's Nocturne in C minor, Op. 48 No. 1. In that section's fifth measure, there is a rolled chord in the left hand, but a block chord in the right. The reverse is true in Scott Joplin's "Crush Collision March", wherein there are several instances of right-hand rolled chords against left-hand block chords.

The problem in the score you've encountered is that the chords are written such that they have the appearance of "partially rolled" chords. However, they're just two chords in which one is rolled and the other is not. In either of the above cases, just put both hands on a single stem, and you have exactly the same thing.

Not the answer you're looking for? Browse other questions tagged theory piano chords notation technique or ask your own question.