Is there a physical explanation of why the dominant chord tends to the tonic in a major scale?

There is no physical explanation that chords or tones (leading tones) want to go somewhere or resolve.

It is the composer and the audience - or the music theorists - who want chords to be resolved like a dominant into the tonic.

Physically tones and chords are dead!

Melodic and harmonic tension exists only in the listeners ear. So it’s us who are constructing a tonic centre and the theory of functionality is pure psychology.

Mind the overtones and the harmonics: the strings of a piano are induced to vibrate if the accord with the overtones, but they won’t resolve. The vibration will extinct.

Imagine two single chords standing distanced of a fifth: also here we can’t define - even not psychologically - which is the tonic and the dominant or subdominant. (e.g. is G->C = V-I or I-IV?)

This is the section of Diether de la Motte's Study of Harmony: (p.28) 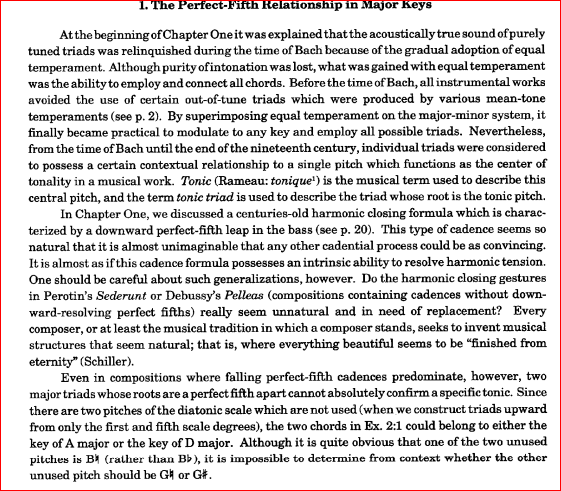 I'm not sure that this is a physical explanation but the V-I or V7-I or V-i (and variants) all derive from earlier (Medieval? 1300? I don't remember.) phrase-ending patterns that involved a major sixth moving to an octave (in two voices) by a half-step and a whole-step). For example, D-B moving to C-C (octave). There have been lots of (in my opinion handwaving mystic) explanation about imperfect (sixth) "seeking" perfection (octave) and the like. (Again, in my opinion, it sounds nice.)

With more parts added, one of the voices was usually written to drop a perfect fifth (G-C) and the D-G was changed a bit to avoid a D-G perfect fourth against the bass (the perfect fourth was considered dissonant against a bass but not against other voices.) Later the motion of step 4 to step 3 was added so that a V7 moved to I. Now (at least) thee events occur simultaneously: a minor third progresses to a unison (inverse of the major sixth progressing to an octave), one voice (often the bass) drops a perfect fifth, and the tritone gets resolved (either an augmented fourth moving to a sixth, F-B moving to E-C or a diminished fifth moving to a third B-F moving to C-E).

All supposition - but if one hears a scale which stops on its leading note, it feels unfinished - probably because it is. Stop on any other note, and there's not that same feeling of 'just one more, please'.

Added to that is the sub-dominant note, producing a tritone, which we seem to hear as quite unstable. That also needs resolving, and would naturally finish on the mediant, particularly in a major key.

Both those notes need to move a semitone, the smallest change in Western music. They are also found in the tritone substitution, which seems to have the same effect.

That leaves the dominant note itself, not going anywhere, and the supertonic, which is aound in sus2 chords, again, appearing to want to resolve to the 3rd, as it usually does in sus2 (properly called retarded2). That sus2 is also an inversion of another sus4 chord.

Used extensively during the Classical period, we've become so used to the progression from V>I, that it's probably the most used cadence. Certainly sounds final to Western ears, and probably why V is dubbed 'dominant'.

Whether this is a 'physical' reason...

Part of all musical traditions stems from listening and expectations. However there is a physical basis for the V7 Chord wanting to resolve to the tonic. For convenience think about the dominant 7th going to a tonic in C and think of how each note relates to both the major scale and the C harmonic series. The C chord contains the 3 lowest different notes of a C harmonic series (C, C, G, C, E)

These notes all form relatively simple ratios to C. The C's are 2:1; the G's are 3:2, and the E's are 5:4 (all in just intonation). The most complicated ratio in the chord would be the E to G which still has a relatively simple value of 6:5.

The notes of a G7 chord form much more tense intervals-reflected in more complicated ratios. The B's form a ratio of 15:8 to C, the D's are 9:8 or 10:9 (these ratios are all slightly more complicated when you go to equal temperament, but uniform). The F is probably the most tense interval even though the major 4th is only 4:3 against C. The F has a ratio of 16:15 against the E to which it wants to resolve. On top of that the G7 chord has the tritone B against F. This has its own special dissonance. Look up mi contra fa.

In addition to the other answers, I would suggest that one factor might also be that the first major triad that shows up in the natural overtone series is based (discounting octaves) on the fundamental or first harmonic: 4/5/6. The second major triad we find is based on the third harmonic (again discounting octaves): 12/15/18. That's the equivalent of our modern major tonic and dominant.

25
What is the full list of possible chord names? Are there chords that don't have a name in chord theory?
2
Why has the vi chord no tonic function, i.e. what gives a chord its function?
4
Chord construction using the minor scale
12
Why does the dominant lead to the tonic?
5
Why does D in the chord progression “Cm Eb F Bb7 C D” sound correct?
8
Why is the third triad dominant?
11
Is the V chord still dominant if it is a major 7 chord?
4
A standard term for “Dominant seventh resolves by P4th up motion”
6
Why are subdominants unstable?
9
What do you mean by the tonic chord feels as 'home'?