Harmonic analysis of Fuchs: 'Mother tells a Story'- Any ideas?

I'm on the final practice keyboard question in the grade 8 workbook and it seems to be considerably more difficult than the others.

We seem to start in G major, quickly moving to chord half dim vii- (perhaps transitioning through chord ii).

we do not resolve to G major after chord vii. Instead, on the last beat of the bar, we have a chord that includes E, C and D (?), which then resolves to C maj at the beginning of bar 2.

It is hard to say what is going on at the start of the bar, as i have not been able to fill in the previous harmony. On the face of it, we could be heading back to chord vii, as it looks like a complete copy of the start. We seem to land on E major at the beginning of bar 4, through perhaps some sort of A chord the beat before (maybe some sort of plagal cadence in relative minor?). Very unsure about this.

I am totally unsure about the middle of the bar. Most accidentals are chromatic decoration, but the C sharp here is a real headscratcher (maybe VII/I in D???- but this is followed by Gsharp, so not sure how that works!). Indeed, the bar seems to end with VII/ ii (if we are indeed still in G major).

Bar 5- ii seems to be the harmony, though this would make the circled B in the top part a 9th- so not sure about this at all.

This could be C sharp-7flat 5 moving to D major (as a secondary dominant, although its difficult to know what key we are in down to the lack of previous analysis). We then seem to move to D major for the final cadence.

My analysis is sketchy to say the least! Any help gratefully received! 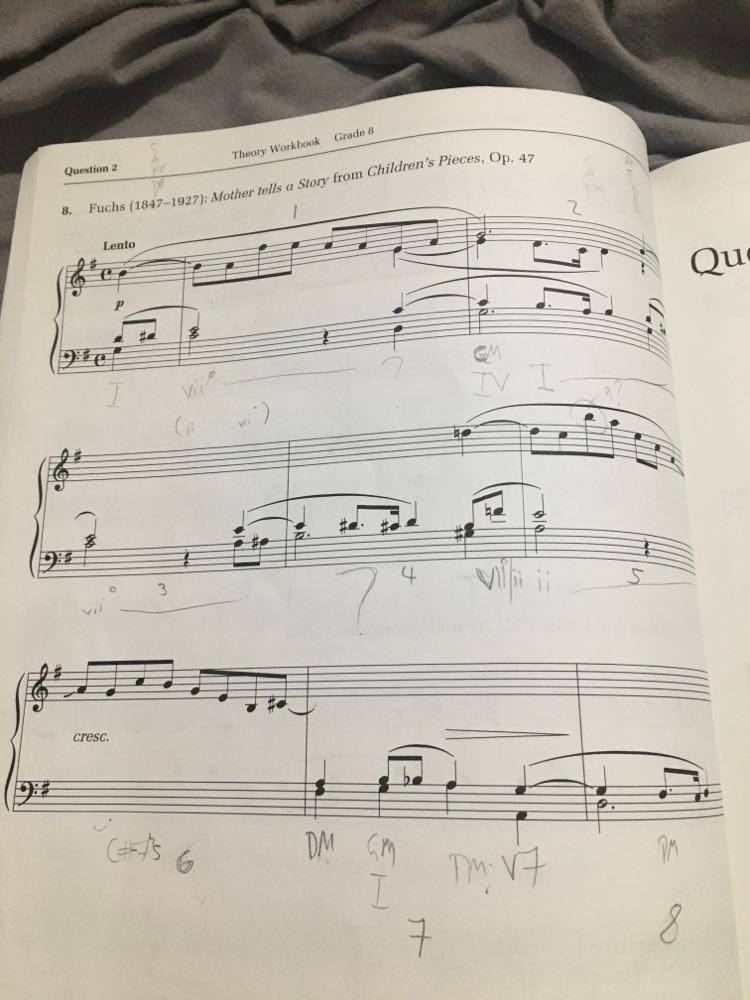 Browse other questions tagged harmony roman-numerals exam-grades or ask your own question.

4
Diminished seventh spelling but functioning as an Augmented Sixth?
2
Can you solve these figured bass queries?
2
Which modulation is correct? (amongst other things!)
0
Who knows whats happening in this score?
0
Have I successfully/legitimately modulated?
1
Is this a deceptive cadence?
2
Is this an example of III7 augmented chord?
0
Roman numeral analysis of exam practice exercise: “Polish Song” by Hiller
0
(REVISED): Roman Numeral Analysis of Fuchs- 'Mother Tells a Story'
2
How is D7 functioning here? Applied chord both kind of does and doesn't fit