On the back of seeing the score, I have filled in the missing harmony. I am still stuck on the harmonic analysis in a few areas. The Roman numerals I have put in thus far are all relative to G major, though we seem to end the piece in D, and I am not too sure about the harmony of the middle section! Here goes:

we do not resolve to G major after chord vii. Instead, on the last beat of the bar, we have a chord that includes E, C and D (?), which then resolves to C maj at the beginning of bar 2. Bar 2 moves from C major, through to B minor (?), then ends on the tonic chord.

Almost a carbon copy of the start, this time it seems like chord vii for the whole of bar 3. Very confused as to what is happening for the first 3 beats of bar 4? And we seem to end the bar with Gsharpdim7 leading to A minor (ii).

Bar 5- ii seems to be the harmony, though this would make the circled B in the top part a 9th- so not sure about this at all.

This could be C sharp-7flat 5 moving to D major? We then seem to move to G major/minor before finally cadencing in D major (I'm viewing the F sharp and A above the question mark as passing notes?). 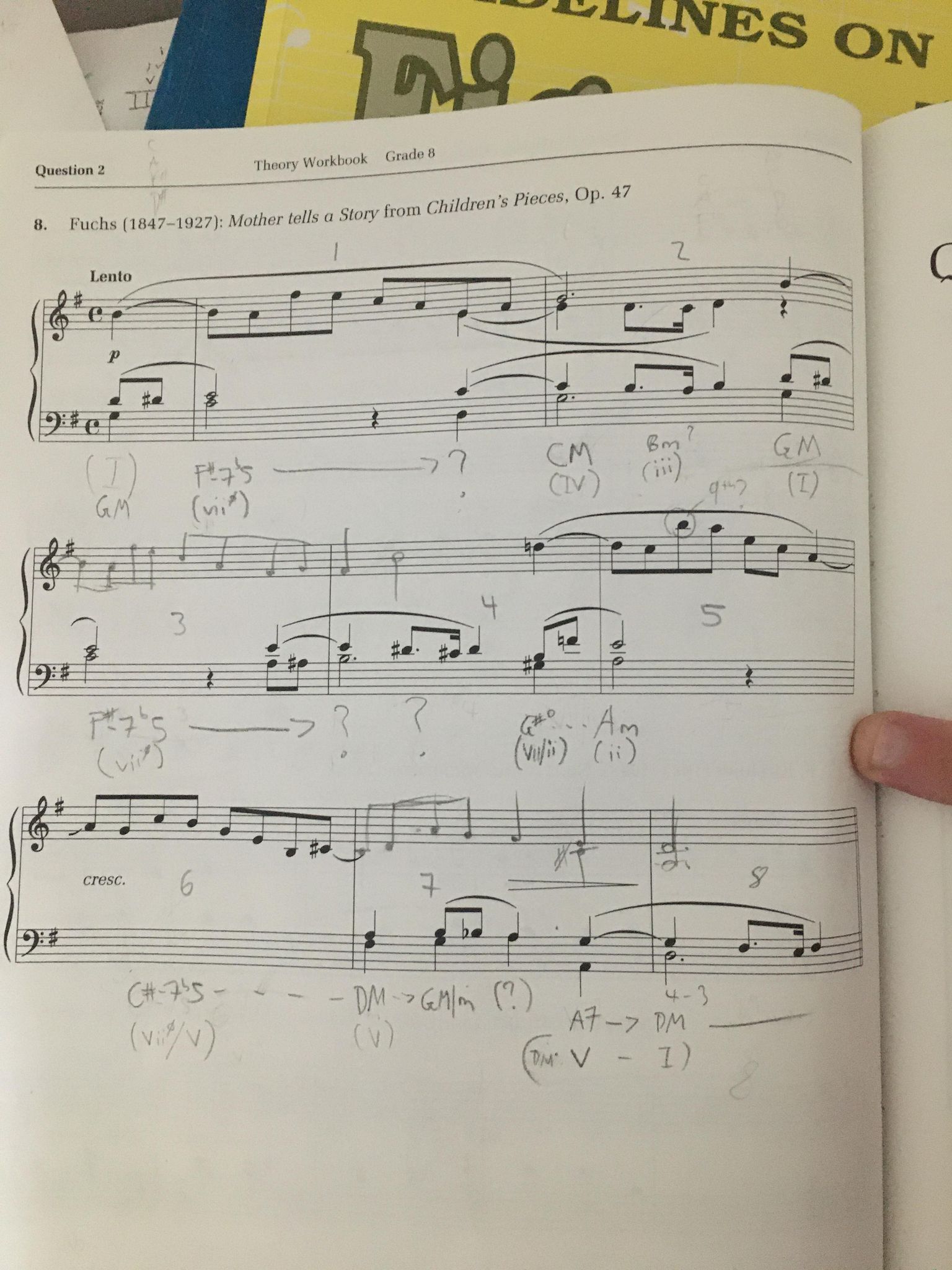 This is a piece that's difficult to analyze without a firm grasp on traditional patterns of suspensions and use of non-harmonic tones. There are further issues with the analysis, but I'll just focus on clarifying the points asked about:

Beat 4 of the first full bar going into bar 2 is basically an ornamented V7-I progression in G major. That is, beat 4 is D7 (with the E as a non-harmonic tone, or maybe counted as a 9th). Beat 1 of bar 2 has two suspensions: the C ultimately resolves down to B on beat 3 (as a 4-3 suspension), while the E resolves down to D on beat 3 (not a dissonant suspension, but the 6-5 motion effectively resembles a suspension, as in a typical cadential 6/4 harmony that resolves down to 5/3 intervals above the bass).

The downbeat of bar 4 has another 4-3 suspension. Overall, the harmony is a B major chord, with the E ultimately resolving down to D♯.

In bar 5, the leap to the high B should be viewed as an appoggiatura, resolving down to the chord tone of A. Alternatively, one can see it as a kind of continuous descending scale (D-C-B-A), where the B would be a kind of accented passing tone that is displaced an octave upward.

In bar 6, you're still missing the bass notes from the original score, but it's basically all an ornamented E minor harmony. The C♯ is a chromatic tone that begins the modulation toward D -- and I suppose kind of generates a viio6 on the last eighth note of bar 6, which then has a delayed resolution (called a suspension or sometimes a retardation when resolved upward) on the first beat of bar 7.

In bar 7, you're missing the middle voice of the original score, which has a sustained D on beats 2 and 3. That creates a cadential 6/4 chord on beat 3, where the D resolves down on beat 4 to C♯ (another 4-3 suspension).

You should look more generous at these chords, not trying to consider each passing tone in your analysis.

Thus I would say the first bar is just entirely the dominant D7 (at first rootless ...) Now continuing with this generosity or better overview (we say „not seeing the wood because of all the trees“) you may go on and find similar cases and be more successful.

Let‘s have a look later at other details.

Not the answer you're looking for? Browse other questions tagged harmony analysis roman-numerals exam-grades or ask your own question.