Difference between Akebono and the diatonic scale?

It is written in this Wikipedia page that

The Akebono scale is a musical scale commonly used in traditional Japanese music. Akebono and the Diatonic scale use the same intervals, but Akebono has no fixed tonic; as such, any Akebono note can be the tonic.

So what's the difference between Akebono and the diatonic scale ?

The web page on Scale and Temperament by Justin Senryū contains extensive discussion of Japanese temperaments and tunings, including relationships to 12-TET. In particular, he writes (about his own adaptation of the system)

The following chart shows Akebono Chōshi in Adjusted 12TET, and in Senryū I by the number of cents difference from standard 12TET, and for Senryū I also showing the ratio (please read up on Just Intonation if this doesn’t make sense), which represents the note’s natural relationship to the mother note, in this case ... 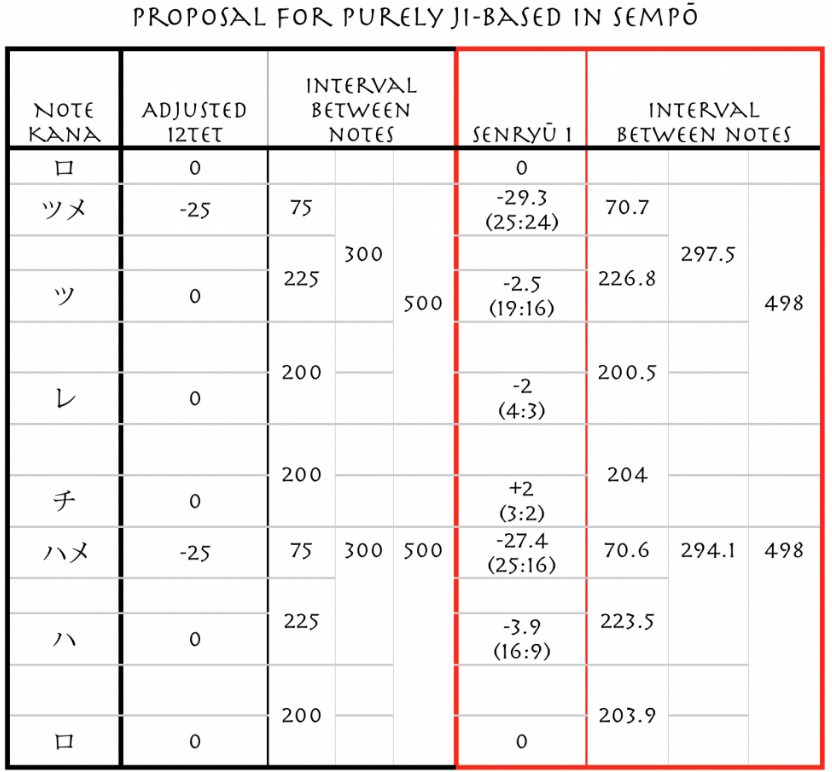 (c) 2020 by Justin Senryū. Used by kind permission of the author.

Note that the chart applies specifically to "shakuhachi honkyoku [music] and Edo period shakuhachi ensemble music", but would not necessarily apply to other instruments.1 Further,

we transpose that one scale into various keys. The chart of mine that you are using, presents that scale in 'akebono key' (akebono chōshi). The same scale is also played in other keys - hon chōshi, kumoi chōshi etc, for which everything in the chart would remain unchanged except for the far left column, which are the tablature-style kana that we use for shakuhachi notation.2

In "The Role of Tone-colour in Japanese Shakuhachi Music", Nick Bellando and Bruno Deschênes mention Akebono:

The “modes” are simply transpositions of a single scale to different starting points on the flute. Because of the transposition and the physical limitations of the flute, however, pieces composed in different modes tend to have a unique intervallic interplay, taking on a gradiantly brighter or darker feel, which is expressed in the names of some modes (akebono, meaning daybreak, or yugure, meaning twilight). Tokita notes that the terms “mode” and “scale” are often used interchangeably in Japanese music. (page 55)

Earlier in the paper, they explain that early Shakuhachi were constructed with evenly spaced finger holes, rather than attempting to adhere to a set of precisely tuned harmonic ratios. This evolved over time, so that more precise tuning came into vogue.

Almost all shakuhachi made during the Edo era ... used finger hole position calculation methods termed towari or kyu-han wari (literally “divided by ten” or “divided by 9.5”) wherein the spacing between each of the four finger holes on the front of the flute is set at 1/10 or 1/9.5 of the total length of the flute. The result is ergonomically pleasing, but the notes are not precisely in tune according to a scale or a mode. Rather, some are a bit low, others are a bit high, and due to the natural bore shape, octaves are slightly off. The assumption is that the tones will be adjusted with the breath, according to the player’s aims.

In the Meiji era (1868-1912), after Japan opened itself to Western influence, musical values began to shift in a more pronounced fashion. ... [Since, due to technological development, instrument construction was] no longer subject to the variety in natural bamboo bore diameters and textures, they can also be more precisely tuned. ... Each shakuhachi would be more precisely in tune with Western pitches.... The goal in the modern construction style is to produce a beautiful and tuned sound for the sake of entertainment, even in honkyoku playing, which means that factors like pitch-precision ... become more important. (pages 46-47)

Other descriptions of the Akebono scale disagree with this characterization. The two I saw (Internet perusal) described that Akebono as a hexatonic scale (consisting of six notes). The given notes were C-D-Eb-G-A; amusing in that no sixth note is listed. There is a picture of what's labeled a drum but consists of some metal bars fixed at one end; the notes are labeled Eb-C-G-D-D-C-Eb-Ab-D with the middle C as lowest (if lengths of the bars matter.)

As no relative frequencies are given, it's not possible to closely match the Akebono scales to the Western A-B-C-D-E-F-G pattern.

There is a discussion in the 1891 "Transactions of the Asiatic Society of Japan." https://archive.org/details/transactionsasi07japagoog/page/n26/mode/2up

Not the answer you're looking for? Browse other questions tagged scales tuning modes temperament or ask your own question.

39
What's so special about minor and major scales?
4
Can a diatonic scale have sharps and flats?
0
Scale Families: heptatonic scales organized by half-steps in their intervallic spelling
1
Diatonic Scales and Modes. How do I reconcile information about Modes?
9
What's the value of modes?
2
Modes of the "major scale" or modes of the "diatonic scale"?
2
Diatonic and heptatonic scales, and degrees
19
Exactly what does "diatonic" mean?
5
Why is it a convention to number modes by their tonic scale degree relative to ionian (major)?
1
What are historical and structural reasons for the prevalence of Major and Minor?