Why does the relation between E major and Ab major feel especially connected? 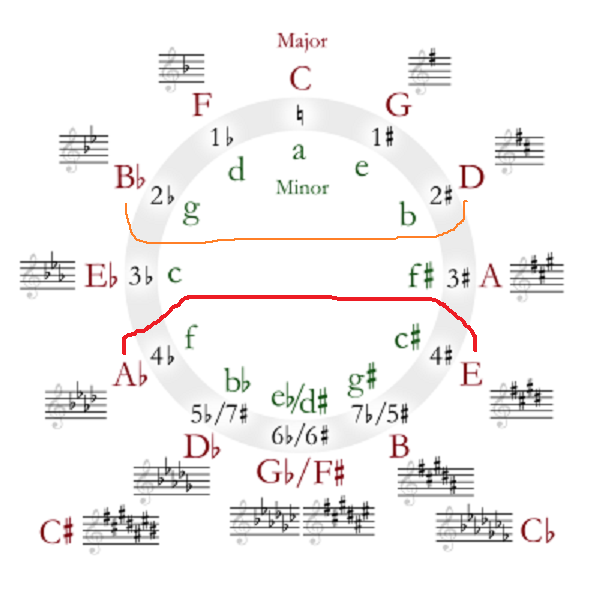 And as you can see from the thickness of the lines, the E major and Ab major feel more connected to me than Bb major and D major do, despite the same relationship between both pairs of keys(Major chords a major third apart). This progression is an example of what I might use to seamlessly go from E major to Ab major:

Of course, it probably wouldn't be quite that simple. Like B major might be followed by BM7(which would make there be 2 common tones between it and Eb major) or there might be some minor chords in between 1 or more of these chords, but these 4 major chords might very well be the basic progression that then gets harmonically embellished. I know that some chromatic mediant relations are stronger than others, and this 2 major chords is probably one of the strongest out there.

But still, why do E major and Ab major seem to be more connected than Bb major and D major? Is there just something about the range from 4 flats to 4 sharps that makes everything there feel connected to everything else, like perhaps the rarity of pieces in these keys, especially on the sharps side?

Objectively, there should be no difference, since E and Ab(G#) majors bear the same relationship as Bb and D majors. Allowing, then, it's a matter of personal perception/preference, I propose two possibilities:

To test: Try improvising in B/Eb (sharp to flat) and and F/A (flat to sharp), to see if a preference emerges and, if so, whether it matches the proposal.

To test: Try improvising over scales closer intervalically to the scales in question. So, for example, D/Gb and A/Db versus E/Ab and Bb/D. See if the range similarities have an impact or not. (Note: I specifically chose keys that are consistent with the sharp/flat change of the keys in their range.)

There may be a historical connection.

As discussed in "The A♭–C–E Complex," these major-third key relationships are most common within those three keys, and not, for example, between B♭, D, and F♯.

The claim that the author makes—and I find it very convincing—is that these major-third cycles were most in tune in earlier practice with these three keys because they have the least number of accidentals in their accidental-heavy keys. And because historical tuning systems often privileged keys with fewer accidentals, this particular major-third cycle was the best, most in-tune option. The cycle with D♭ has five flats in its most accidental-heavy key (one more than A♭), your B♭–D–G♭ cycle has six flats, and the remaining cycle has B major with five sharps.

You're presumably not using these tuning systems anymore, but there may be a subconscious connection here where you sense that these keys were more commonly used than B♭ and D.

Will you feel still any difference?

I bet that no!

Not the answer you're looking for? Browse other questions tagged harmony key modulation or ask your own question.

28
Why is music for strings more likely to be in keys with sharps?
46
When were the terms "Major" and "Minor" applied to keys?
4
Does the rule regarding consecutive octaves/fifths actually hold any weight?
9
Is parallel modulation a thing?
1
Is B major harder or easier to play on strings than Ab major?
1
Using an augmented chord to modulate to a distant key, will this work?
5
Esus4 in the key of C. How can I use it?
9
Can the same song be written in a minor key and major key with the progression written differently?