I've written a piece of music, for string quartet plus triangle. But I'm having trouble expressing the last bar in the right way.

In the second half of the bar:

I could use an explicit tempo change i.e. "𝅘𝅥=42". But this would seem like a bit of overkill, and is too precise to be really what I intend. Also, it wouldn't indicate a continual slowing down, unless I used one for every note of the tremolo roll.

I could use a ritenuto marking for all instruments, but this don't really make much sense when placed over a single note (for the upper strings).

I could use some combination of fermata for the strings, and ritenuto for the cello and triangle, (which is what I have at the moment) but this seems yuck; unnecessarily awkward and potentially confusing: 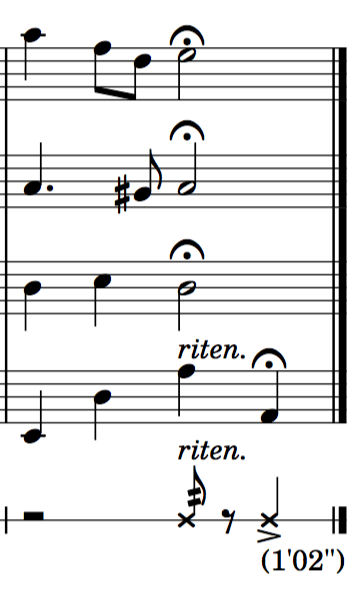 What is the best way that I can notate what I intend to be played, that is less clunky and garbled?

The minim in each of the top three parts is written as a crotchet tied to another crotchet. Now your 'riten.' applies to the whole ensemble, and now that they're all slowing down, you might not need the fermate, but it's up to you. If you do, remember the triangle part needs one too.

BTW, Your "tremolo roll (slowing throughout)" is a bit vague. You do mean the tempo slows, not the tremolo, right? (That would be unusual in a piece like yours.)

Upper Strings: Place the fermatas as you have, and add the "riten." I suggest putting it in parentheses and italics to indicate that it's a cue from another part. That will make sense to an experienced performer. If you want to go a step further, you could add explicit cello cues so the upper strings can see exactly what's going on.

Cello: Place fermatas on both crotchets, since you want each to be extended, keeping the "riten." as is. Consider adding a cue so the cellist understands that the triangle has a rest before the final note.

Triangle: Place fermatas on the roll, the rest, and the final crotchet, according to which ones should be extended. A fermata on the final crotchet can again be in parentheses to signal that it's a cue for another part.

It isn’t necessary to indicate every single detail for the musicians. As it is the end of the piece I’m sure all intelligent musicians will read this gestura like it is meant by you without additional information: slowing down, communicating with each other. You even don’t need to notate ritenuto, diminuendo, fermatas, tenuto, or rests. All these indications seem redundant to me unless you want this finale performed staccato, fortissimo, stringendo.

5
Meaning of numbers under bass line in BWV 51 mvt.3 (maybe chords?)
2
Beginner at piano and I don't seem to have good inner tempo/pulse
1
Drum set notation
2
What does ben tenuto il basso mean?
2
How to make my piece feel like a Presto
1
Are there any other tempo descriptors that imply melancholy?
1
Any tips for reading sequencer piano roll notation?
2
Is it possible to combine accent and tremolo in notation?
2
Proper use of fermata marks on sheet music
4
Percussion duration notation issue