I am writing a piece in 4/4 which has triplets all the way. I insist it is not a "swing" feel, which I know how to notate (writing regular eight notes and adding the Swing decorator), but regular triplets.

My first approach was to write it in 12/8 and use dotted quarters as if they were regular quarters, This gives the exact sound that I need, but I'm not quite happy with this idea of a "dotted beat" (see images below)

My other thought is to use 4/4 notation and use triplets all the way, but I find this notation quite redundant.

What would be perfect would be an indication that 1 quarter = 3 eights, I've seen something similar on some sheets, but I don't know If it's possible (I use Musescore) and above all if it's an "acceptable" notation.

What would you advise me to do?

Here are my 2 attempts :

The 12/8 version is absolutely standard and would give no trouble to a reasonably experienced performer.

I agree that the 4/4 version is unnecessarily cluttered. It's not unusual, however, to leave out the triplet markings for groups of three eighths once the rhythm is clearly established. For example, here's an excerpt from the Mikuli edition of Chopin's Nocturne in E minor (op. 72 no. 1) 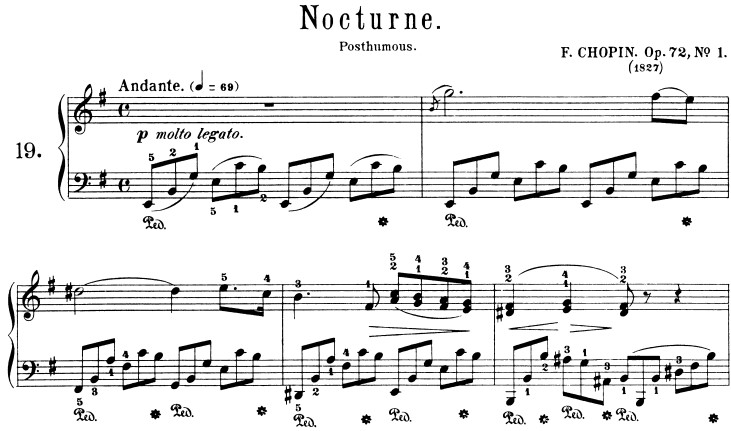 If you wrote it in 4/4 with frequent or constant triplets, you'd be in good company. That is how Beethoven rendered the first movement of his piano sonata number 14 ("Moonlight") and how Ravel notated "Bolero" (think of the snare rhythm).

The Beethoven sonata may be a very helpful model because the first bar or two is usually notated with explicit triplets and then I believe a simile is written so the 3s are omitted from the rest of the movement and it's clear that it's just constant triplets in the right hand.

The decision should really be based on the overall feel of the piece - is it a 4/4 piece or a 12/8 piece? And also what kinds of rhythms appear in any other voices or parts. In the both of the examples I've given, other parts and voices clearly have 4/4 rhythms.

I think half the problem is the stem direction. In the first example, it's easier to read due to the differentiation due to SATB (sort of), whereas the second example squashes it all together, with differences in the 'alto' part - notwithstanding differences in timings of certain notes.

The '4/4 v 12/8' question still stands, and there's absolutely no need to put in the triplet markings beyond the first couple of bars, where it establishes itself as the norm for most players.Yes, 12/8 is probably more 'correct', but very often we read pieces such as this in 4/4 as it's the way to go. Although from a personal point of view, out of the two, I prefer reading the first example - only because the second is unnecessarily cluttered, thus not so easy to read.

Were the second example tidied up, it would probably be the preferred of the two, generally speaking. Maybe it's the problem with Musescore, which you use to write out the dots? I find Musescore hard work sometimes.

Not the answer you're looking for? Browse other questions tagged notation engraving tuplet or ask your own question.

8
Notating 6 (or more) triplets with a single beam?
7
How to clearly notate tuplets, both "simple" and "complex," in irregular meters
9
How to write 2 crotchet (quarter note) triplets when they don't start on the down beat?
0
How do you write triplets into muse score?
3
How to describe occasional non-swing eighth notes using swing notation?
4
Dotted or tied quarter on beat two?
16
How to notate time signature switching consistently every measure
4
Diminished 7th notation, match the key or key signature?
3
Music Notation (in Musescore) - Ties or Separate Voices?
4
The proper way to mark sustain pedal for MuseScore playback and live performer?