I'm looking for help both understanding and how to properly notate semiquaver triplets in 3/4 time?

Here is an example of what I am referencing. Here is how it is supposed to sound: https://drive.google.com/file/d/1G1tNWeMQ_IADvZ8JITKzK0WIUDPYvMSA/view?usp=sharing

I am looking for assistance in properly arranging this to maintain the sound, but also helping understand why, with respect to note values. I believe this is 3/8 time as presently written? I am looking to maintain 3/4 time.

If I am correct, in the tuplet, the first note should be dotted, then the second should be a regular crotchet?

I can't open your link, but the notation is wrong, as you suspect!

It would most commonly be written in one of these ways: 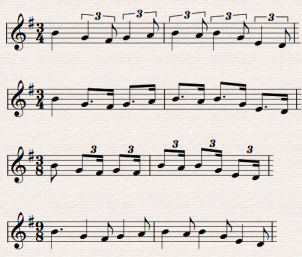 (The fifth note in the third line should of course be an A!)

There's another - simpler - way to notate it if the style of the piece is jazz-influenced, but it looks more slip-jiggy to me.

Conventionally, a triplet is played so that its three consituent beats take the time of two "normal" beats. So as notated, you're right; each of those "triplets" consisting of an eighth and a sixteenth note would be played in the same amount of time as two sixteenth notes. Which means that all of your bars, as notated, are three eighth notes long.

The way around this is to use a quarter note and an eighth note in the triplet instead, like so:

The bracket is used when a tuplet group isn't beamed, to clearly denote which beats are included in the tuplet.

The image above is copied from the Finale blog, but most music notation software worth its salt will be able to create something similar.

Not the answer you're looking for? Browse other questions tagged theory notation violin or ask your own question.

4
How can I render "uneven" tuplets in ABC notation?

4
I need help understanding a complex (or maybe compound) time signature
5
Need help with notation and time signatures
17
How long is Staccato?
1
How to notate triplets longer than 1 measure?
7
How to clearly notate tuplets, both "simple" and "complex," in irregular meters
9
Understanding Time Signature: How do I identify the time signature of a song?
5
How to properly notate scales that are not heptatonic
7
12 bar blues notation
2
How can I notate this better in 12/8 time?